Naming your kid is almost like playing God. You have this immense power over another human being. You're in charge of what this person will be called for the rest of his/her life. And you have literally thousands of choices in hundreds of baby-naming books. It's a lot of pressure. I wouldn't be surprised if people divorced thanks to "name" fights. My parents didn't divorce when they named me, but they didn't succeed in creating a wonderful name for me, either.

To be honest, I hate my name. I mean, I really hate my name. I've never even met someone with my name. I've thought about changing it, but I'm gutless. I might be lucky if 1% of people I encounter either in person or on the phone or even email get it right. Despite my name being Lorne, I've been called Lauren, Loren, Lorene, Lorney, Lance, Laraine, Lor, Warren and so many other incorrect and ridiculous variations. I've even been called Jeff. Why? Well, it's interesting. My HS math teacher had a speech impediment and sounded like Elmer Fudd. So, I figured she called me Jeff because she'd have to pronounce my name "Wawen." Turns out she called me Jeff because she got me confused with this kid who sat in the front of the class. OK, that makes some sense. Except Jeff was African-American. If you check out my profile pic, you can clearly see I'm not. What the hell?

It sucked as a kid. It sucks as an adult. Even people who have known me for years have trouble with my name, sometimes calling me Lauren. It irks me, but I live with it. And then there's the phone. I've got a high voice, so people automatically think I'm female. Add in the name and I'm definitely female to people on the other end of the line. It's rare when I get called "Mr." It bothers me each time, a burning feeling in my chest and stomach, but whatever. I'm tired of correcting people. I'm tired of saying, "You know, like Lorne Greene. Like Lorne Michaels. The E is silent. It rhymes with born." I've despised my name for so long that when the television adaptation of Fargo premiered and I discovered Billy Bob Thornton's character, a supremely confident, malevolent killer with a dark sense of humor, is named Lorne Malvo, I got so excited that I tweeted my thanks for giving my name some menace to show runner, Noah Hawley. He didn't write back, but still... so cool! There's also a city in Australia named Lorne. Australia is where I'd most like to live (yes, I've been there), and maybe that's a sign that a big move is in our future. Probably not, though. I also visited a bar in Scotland named "The Lorne" and was so excited I went in and showed my driver's license hoping they'd shower me with free drinks as if I were a veteran returning from deployment. They looked at me like I was crazy. At least I have Fargo now. 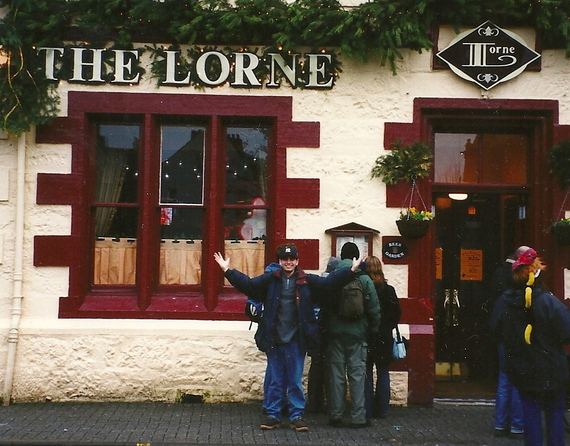 Which brings me to what happened when my wife and I named our daughter. I absolutely considered the schoolyard aspect, the possible taunting rhymes. I didn't want my child to deal with that, though I know kids will always come up with something. Kids are cruel. At best I wanted to lessen the possibilities.

I was named after my maternal grandfather using the Jewish tradition of using the first letter of a deceased relative. Since my grandfather's name was Leon, my parents were stuck with L. They hated all L names -- Lee, Larry, Lewis -- until my mom, who was a teacher at the time, found a kid named Lorne in her class. So I'm named after some random kid in my mom's former class.

My wife wanted to name our kid after a superhero or comic book character. She was set on Bruce Wayne for a boy. I nixed it. Bruce Wayne? No. That's too much. She even said she'd settle for Bruce W. with the W secretly being Wayne. I couldn't do it. Plus, I hate the name Bruce (apologies to all the Bruces out there). We eventually agreed on Logan after Wolverine. Then we learned we were having a girl. We thought about keeping Logan, but decided against it. Didn't feel right. There aren't many female superheroes and neither of us are into comics. There's Wonder Woman, but neither of us liked the name "Diana." What to do? Originally we decided on Kaylee after the character on Firefly, but Elaine thought her parents (both Ecuadorian immigrants who speak very little English) would have trouble with it. Then I thought about G.I. Joe and the Baroness, a strong female character even if she was a part of Cobra. Sienna Miller played her in G.I. Joe: The Rise of Cobra. Sienna. Sienna. It sounded right. Sure it wasn't a direct comic book character, but it was actress playing a strong female. Plus there's Siena, Italy, a beautiful little town. We liked it. Nay, we loved it! Sienna it was!

My parents asked us if we'd consider a middle name honoring my late grandfather George, meaning something starting with G. We said we'd think about and then went about coming up with ludicrous G names: Gizmo, Gonzo, Grape Ape. Suddenly I said, "Giselle," and we looked at each other. Sienna Giselle. Perfection. Beautiful. I was so thrilled we'd be able to honor my grandfather that I worked on and printed out a special certificate for my grandmother. Her reaction? Anger. Sadness. My wife's not Jewish, you see, so it "doesn't count." Plus it was a middle name, not a first name. It was an "insult." I was stunned and hurt. I never wanted to speak to my grandmother again. I mean, this was the only great-grandchild she had paying homage to her late husband. But she came around. Now she cherishes the name almost as much as she cherishes her great-granddaughter.

Will Sienna like her name? I sure hope so. I pray she doesn't suffer too much because of it. I know she'll get annoyed saying, "It's 2 N's, not 1," but I haven't come up with a cruel playground rhyme. I hope she sees the beauty in the name, how Sienna Giselle flows off the tongue. I hope she's proud to say her name and doesn't cringe when she hears it like I do with mine.

But the problem with playing God is that you never know about unintended consequences, and naming your child is one of those perilous moments that could leave terrible emotional marks or, on the flip side, could empower him or her.

So, how did you decide what to name your child?