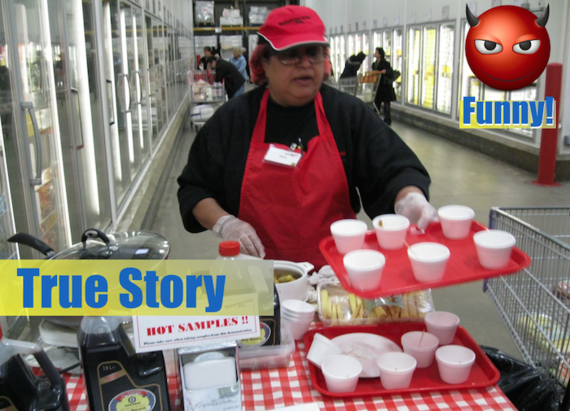 You've been to Costco, right? You've seen the people who set up a stand and give away samples of meatballs or fish sticks or crab dip, right? You know that the people giving out the samples will often say if you ask for a second sample: "I'm sorry, but it's just one sample per customer," right? Well, before I tell you about the magical time I got a second piece of Aidell's sausage from the woman handing out the samples at Costco, I must tell you this first...

I'M FAMOUS: During the spring of 1999, more than 2 million people per night tuned in to watch me on TV. That is, assuming you understand the word "me" to mean... Craig Kilborn. You see, I was one of the original writers on the Late Late Show With Craig Kilborn... and was frequently featured on air, in one comedy bit or another. In retrospect, I use the term "comedy" loosely. Anyway, why was I featured? Was it because I had some particular comic gift? Or because I agreed to work for less than scale? Of course not. You see, there's a rule in show business that a handsome, glib, 30-something, blond-haired white man can not occupy the TV screen ALONE for more than 12 consecutive minutes -- it has something to do with a fear of aryans among the early Jews who invented show business. Seriously. Think about it. During Entertainment Tonight's salad years, do you ever recall seeing John Tesh alone on screen? Of course not. They only told you Mary Hart was there because she had great legs. Go back and watch 90210. There's a reason you never saw Ian Ziering do Shakespeare's "Alas, poor Yorick" monologue. And it wasn't because he's a crummy actor. Although, he is. Moving on. In my case, the only salve powerful enough to undermine Craig's pristine looks and mid-western charm was the frequent, awkward appearances of his shlubby, red-haired, Jew-from-Long-Island writer.

HAVARTI VS. GOUDA: During my near two years at the Late Late Show, I appeared on TV two or three times a month, give or take. I was frequently featured in the show's signature piece, The Five Questions. In case you don't recall, the first guest on any episode was asked five questions in a quiz-like format at the end of their interview. Correct answers were indicated with a "bell" sound. Incorrect answers were indicated by a "buzzing" sound. Only here's the thing, most of the questions were just the guest's opinion. For example: Which cheese sounds funnier: Havarti or Gouda? Or, Which Disney character is more likely to be secretly gay: Goofy or Pluto? Anyway, I had been writing the bulk of these questions for months and when I got to "Gruyere", I realized I was now out of funny sounding cheeses. Cheddar isn't funny, right? Well, cheddar that was the only cheese I had left, so I suddenly needed a new type of question. Out of shear desperation, I submitted to Craig: "Would you give our writer, Jon Hotchkiss a hug?" I didn't think Craig would go for it... but he did.

Over the course of several weeks, I got hugs from Cheech Marin, the supermodel Kathy Ireland, several other super models, and about a dozen "B-list" celebrities promoting their guest-starring role on that week's NCIS. Given all the hooting and laughter as I nuzzled the lead guest, the audience seemed to like this bit. However, upon further reflection, it now dawns on me that the audience wasn't laughing at the scripted delight I seemingly took from exaggerating an awkwardly long hug with a gorgeous famous stranger, but rather, the audience was laughing because the gorgeous famous celebrity was awkwardly forced to hug the shlubby writer, who in terms of looks, was clearly below their exalted station. Yes. Being on TV felt a bit like starring in a Disney movie. Unfortunately, it was Beauty And The Beast.

Anyway, not only did I get to hug supermodels, I was also featured in a bit at the top of the show with just Craig. Back in 1999, comedy improv had taken the world by storm thanks to the huge popularity of Whose Line Is It Anyway?. So, in an effort to capture and delight some of that comedy improv audience, I wrote a bit for Craig and I. Craig would sit at the desk. I would sit beside him. In my hands, I held a fish bowl. Inside the bowl were slips of paper. Craig would do some kind of set up where he'd say something like:

"Improv has become very popular. And I would like to show off some of my improv skills. Sitting beside me is one on my writers, Jon Hotchkiss. Now, Jon, you and I have never met, is that right?"

People would laugh. I would follow up with: "No Craig, that's not right. I'm one of the writers. We see each other all the time."

This got a bigger laugh. At least, that's how I remember it. Craig would continue:

"Jon, you are holding a fish bowl. Inside the fishbowl are some suggestions for me to improvise. I have not seen these suggestions, is that correct?" On TV, I would say he hadn't seen the suggestions -- although, in reality, he had. But, more on that in a moment. Next, Craig would ask me to reach in the bowl and take out one of the slips of paper and read it. I would stick my hand in the bowl and vigorously mix the slips of paper -- none of which really had anything written on them. I would pull out the first suggestion and remember the line I had rehearsed, "Things You Don't Want To Hear Your Caterer Say At Your Daughter's Wedding." Craig would repeat the set-up and then as the lights dimmed, Craig would "go into a trance" -- in order to think up a few things he wouldn't want to hear a caterer say at his daughter's wedding. When the lights came back up, Craig -- miraculously, as if by magic -- would rattle off a few jokes that he had improvised -- "just thought up." Right. That. Second. While he was in the trance.

"We're out of KY Jelly," is a joke I just thought up. You would not want to hear the cater at your daughter's wedding say "KY Jelly." Then, after I read the third suggestion Craig would again go into a trance... only this time, he would "REALLY" concentrate... he would scrunch his face, grimace like he was really thinking... then, abruptly break the trance, shout to the director to turn the lights on... He would fumpher and stammer a bit -- clearly, something was wrong. In a stage whisper, he would indicate to me that he was having some trouble... I would then gesture with my eyes that he should look off to the right... When that didn't get his attention, I "surreptitiously" gestured with my forefinger for him to look off stage... At that moment, the camera would cut from Craig -- so the audience could see -- to reveal a guy off screen holding a three foot tall cue card. On top of the cue card in five-inch high letters in black ink was written the same set up I had just read off the slip of paper. And underneath, in a bullet pointed list, were two or three jokes for Craig to tell -- as if he had just thought them up. Next to the cue card guy were two more cards, which had the jokes from the first two set-ups. The audience laughed at our "cleverness" and the TV academy gave us both Emmy awards. At least, that's the story I tell my kids.

A SECOND PIECE OF SAUSAGE: OK. So. On the day I head to the local Costco I had been featured on the Late Late Show with Craig Kilborn perhaps 12 or 15 times already. As I'm shopping, I see about six people behind a couple of tables. On the tables are about 12 crock-pots. Inside each crock-pot is a silver-dollar-sized slice of Aidell's sausage. Each crock-pot has in front of it a sign indicating which sausage sample you'll be given on the end of a toothpick. When it's my turn, I walk up to a girl whose likely in her mid-20s. I ask to sample the apple sausage. She opens the crock-pot, stabs a piece with the end of a toothpick and hands it to me. I eat it. Then, I say to the same girl, "Can I also try the spicy one?" She looks at me and gently says: "I'm sorry, it's just one sample per customer." I shake my head with disappointment and as I turn to walk away, she says: "Hold it. Have I seen you on TV?" I turn back and sheepishly admit that it's possible, depending on what she's watching. She says: "You're on the Craig Kilborn Show. You do that improv bit with Craig, right?" Her recognizing me pleases me to no end. Why? Not because she thinks I'm "famous," but rather because I was under the assumption that Craig's only viewers were prison inmates. With our bond now established, she gestures for me to lean in and then whispers "OK. You can have a second piece of sausage."

A second piece of sausage.

BREAST IMPLANTS: After thanking her several times for her generosity and for watching the show, I continued on my shopping way, where I'm suddenly confronted with a realization that had previously been somewhat ephemeral. Although at that point in my show business career, I had worked on many shows, been around many celebrities, I don't think I was so keenly aware of the charmed and uniquely frictionless life lead by famous people. Who would have guessed that the definition of "famous" was so malleable that it could be stretched to include: "appeared 12 to 15 times in bits on a late night talk show." We all know that famous people don't have to wait on line at crowded restaurants... they fly first class on the airplane... and they get out of speeding tickets -- assuming they show the cops their breast implants. And not just actresses. Tom Arnold and Wilfred Brimley, too. But, even better than all of those perks, even if Aidell the Sausage King's sample policy is just one per customer, when you're famous, you can get a second piece of sausage.

Jon Hotchkiss is the creator of the new series, This vs That, a show featuring leading scientists that reveals the answers to questions like: "What's the fastest way to load 100 passengers onto a 757?" You're invited to see the series premiere, FREE by clicking here.