The end of the year is a great time to reflect on the passing year and look ahead to the upcoming year and all of its glorious opportunities. Naturally, I've spent some time reflecting on the challenging and often thankless job of parent, more specifically single parent. As a single parent, you get all of the tantrums, all of the bickering. You are on diaper duty all the time. It's your night time shift every night. When they're sick, you're the parent. When you're sick (even worse), you're still on (and by that, I mean you manage to turn on Disney Jr. in your fevered haze and warm up some chicken nuggets in between doses of Dayquil).

While I could sit around and complain about how hard of a job it is and how I never imagined my life taking this path, I'm not going to. Partly because one of my New Year's resolutions is to complain less and partly because it's not all bad. In fact, there are certain advantages to the single parenting gig. Below are a few of the perks:

I'm the boss: I get to make the parenting decisions. I don't have to consult with anyone. I don't have anyone questioning my choices (except for me--classic overthinker) or overruling my judgments. If I say that we are going to watch the Lego movie and have a Nerf war tonight, that's what we do. If I say that it's early bedtime because no one has listened to Mom all day, then that's what happens. For a slightly obsessive, hardcore Type A personality such as myself, this is right up my alley.

All of the high points: I already mentioned that being a single parent means dealing with all of the not-so-fun aspects that accompanies raising children. But it also means experiencing all of the best moments, too. All of the daily hugs and kisses. All of the "I love you"s. Those lazy mornings all cuddled up on the couch under the same blanket. Every funny saying and mispronounced word that sends you into fits of giggles -- those are all yours. You don't even have to share.

Motivating factor: Most parents want to be a positive role model for their children. They want to create a world that is better for their children and future generations, and they want to be the best version of themselves possible as they know that there are little eyes always watching. For me, these feelings only intensified when I became a single parent. My children spend roughly 80% of their time with me, and that thought is enough to terrify and motivate me to be my best self. It is a constant reminder to treat others and myself well because my kids are emulating me.

Helps to make peace with the past: When a relationship ends, it is really easy to get caught up in a never ending spiral of questions that lead nowhere: Did I just waste several years of my life? Were the warning signs there before I got married? How will I ever start over? Why did this happen to me? (If you have never had a pity party for yourself, you can skip this part. And then please email me all your secrets.) When you have children with someone though, you can't regret the whole thing, at least I can't. As I've said before, this was never the plan. Being a single parent is hard. But I have two healthy, bright, beautiful, and hilarious children, and that makes it all worth it.

Confidence booster: Kids can be brutally honest, sure, but they can also be some of the kindest creatures. My daughter, especially, likes to tell me if she thinks my shoes or skirt or cardigan are pretty. The other night before bed, she told me, "Mama, I love your arms." I laughed aloud and also teared up a bit. I've always been self-conscious about my arms, but my daughter doesn't see where they could be toned up, she just sees two arms that hold her at night time so Chuck E. (she's terrified of Chuck E. from Chuck E. Cheese; I can't really blame her) won't get her. That's one type of confidence booster. The other type comes when people compliment your children. All parents appreciate this, but it means just a little bit more to the single parent who's wondering if he or she is doing anything right at all. The other day, my father said that he and a family friend were talking about how they could tell I really worked with my kids and it showed. Not only was it a lovely thing to hear, it bolstered my spirits and improved my morale as I tackled another day with a preschooler and a toddler. 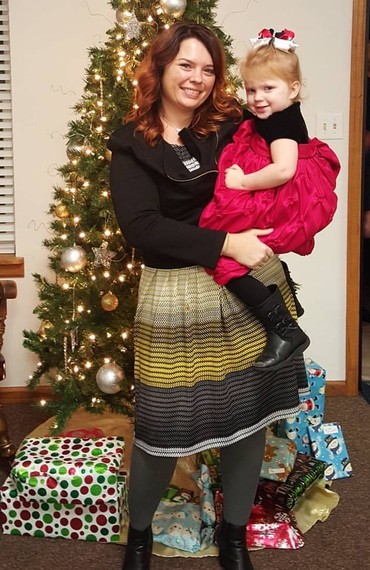 2016 will mark the third year I've rung in as a single parent, and I'm looking forward to it. Oh, it will bring its challenges, its trying times, its momentary defeats. I'm sure I will shed a few (million) tears. But there will also be so much laughter and love. There are new adventures to be had and memories to be made. And that's what I will choose to focus on -- the perks, not the hardships, of single parenthood.