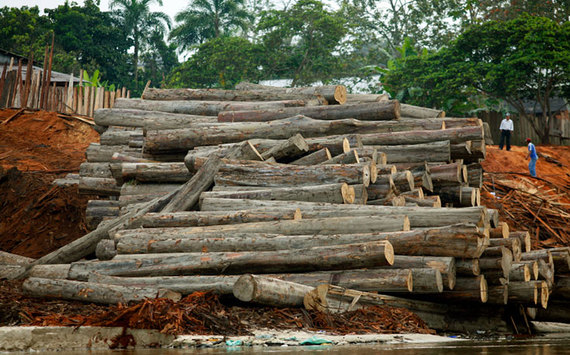 Today, April 12th, marks the 10-year anniversary of the signing of a trade pact between the U.S. and Peru. This trade agreement was the first, and only, U.S. trade agreement that the Sierra Club did not oppose. The Peru free trade deal was the first ever trade agreement to have a legally binding environment chapter, and it also included an "Annex on Forest Sector Governance" that laid out pages of detailed obligations that Peru must undertake to stop illegal logging and the illegal timber trade. While the Sierra Club strongly opposed the polluter-friendly investment rules included in the deal, we took a gamble that a strong, binding environment chapter might counter the weight of the flawed investment chapter. Ten years after the signing of the pact, it is clear that bet didn't pay off.

Despite the detailed rules in the pact that required Peru to reduce illegal logging, the illegal logging crisis continues today unabated. Peru's own government found in 2014 that 78 percent of Peru's wood slated for export was harvested illegally. In October 2015, Peru's forestry oversight agency found that in 94 percent of 144 surveyed logging operations, wood slated for export had been logged illegally. In January 2016, Peru's government responded to the finding by firing the person in charge of the forestry oversight agency.

Despite such flagrant violations, the United States Trade Representative (USTR) consistently refused requests to enforce the trade deal's anti-illegal logging provisions. In the first 2,581 days of the agreement, Peruvian timber companies with a documented track record of illegality sent well over 100 shipments of wood to the U.S. Not once did the USTR use the tools in the trade pact to demand that Peru verify the legality of any of these shipments.

It wasn't until February 2016, more than seven years after the Peru trade deal took effect, that the USTR made its first such request, for a single shipment from a single exporter. This almost complete lack of enforcement undercuts U.S. businesses and workers by allowing U.S. consumers to unwittingly support environmental destruction.

While the environment chapter hasn't proved capable of protecting the environment, the investment chapter of the pact has proven dangerous for our environment. In 1997, Doe Run Peru--a Peruvian subsidiary of the U.S.-based company Renco Group Inc.--took control of a metallic smelter and refinery complex in La Oroya, Peru--one of the ten most polluted sites in the world. As part of its contractual obligations, Doe Run was required to implement a series of environmental cleanup projects in La Oroya, including the installation of new sulfuric acid plants to help combat the pollution produced by its complex.

The company twice failed to meet its deadlines for the environmental clean-up and was twice granted extensions by Peruvian authorities to complete its environmental remediation obligations. When the Peruvian government decided to not give Doe Run a third extension, Renco Group Inc. retaliated by using the "investor-state dispute settlement" rules in the Peru trade deal. These rules allowed Renco to sue the government of Peru for $800 million in a private trade tribunal. The corporation claimed, among other issues, that Peru's decision to not grant Doe Run yet another time-consuming extension violated its trade pact right to "a minimum standard of treatment." The case is still ongoing.

The good news is that on this 10-year anniversary we don't just have to reflect back - we can also look forward. The U.S. and Peru are both part of a new proposed trade deal, the Trans-Pacific Partnership (TPP), that has been signed but not approved by Congress. Among other major threats, the TPP would expand the dangerous investor-state rules that Renco is using against Peru to thousands of new foreign firms, empowering major polluters to challenge U.S. climate policies in private trade tribunals. The pact also would require the U.S. Department of Energy to automatically approve exports of gas to countries in the pact, thereby facilitating increased fracking and climate disrupting emissions. To make matters worse, the TPP's provisions against illegal logging are not even as strong as the ones in the Peru deal that have failed to curb logging abuses.

As Sierra Club executive director Michael Brune said upon the TPP's symbolic signing ceremony in a casino in New Zealand, "Signing the TPP is Russian roulette for our economy and our climate." We took a gamble on the U.S.-Peru trade pact, but we won't make that bet again. Please join us in strongly voicing your opposition to the TPP by writing your member of Congress now, letting him or her know that you oppose this dangerous pact that would harm workers, communities, and our environment.