What is a Birth Certificate?

A birth certificate is issued to legally register every birth. It is a vital record documenting the facts of a birth. It memorializes the arrival of each and every human being - setting the date, time, and location of that auspicious and unique event.

Every person has just one original certified birth certificate (OBC) which serves to verify their age and citizenship as the basis for all of one's identification such as driver license, passport, and social security. Birth certificates (BCs) connect us to our ancestral line and as such serve a critical role in genealogy. 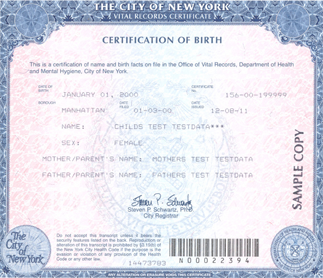 This is verified by the following definitions:

birth cer·tif·i·cate
noun
an official document issued to record a person's birth, including such identifying data as name, gender, date of birth, place of birth, and parentage.
(FreeDictionary,com)

the certificate that is filed with the right authorities when a child is born that records the date and place of birth and the parent's names etc. (TheLawDictionary.com)

A birth certificate is a vital record that documents the birth of a child. The term "birth certificate" can refer to either the original document certifying the circumstances of the birth or to a certified copy of or representation of the ensuing registration of that birth. (Wikipedia)

In the beginning, children born to married couples had both parents named on their Birth certificates (BCs) and children born to unmarried mothers were rubber stamped "illegitimate." Currently some states leave the naming of an unmarried father up to the mother while in other states, such as New York, the baby's father, if not married to the mother, has to either be present at the birth or sign an affidavit of paternity.

Starting in the 1930s and 40s, when an adoption is finalized the OBC that accurately records the birth remains intact and in most states, but not all, is sealed. In its place an "amended" BC is issued naming the adopters as the parents of birth, and they can and often do, change the date and location of the birth.

Amended BCs were created to legalize the façade that adoption was "the same as if" having a child born to you. Because they do not indicate any alteration has been made, many people grew into adults never knowing they were adopted giving false medical history to their health professionals and causing feelings of betrayal upon discovery.
.
Adoptees have been fighting against the secrecy and their denial to their truth since their BCs first became sealed. It is important to note that adopted persons are experiencing great difficulty and being denied obtaining passports post 9-11 because the filing date on their BC can be a year or more after their date of birth which arouses suspicion.

Interestingly, almost three years after my eldest son was born I decided to change his name. I contacted vital records and completed a form to indicate the requested change. In time I was mailed his birth certificate showing his original name and his new name. To this day, that BC showing the change, and a rubber stamp indicating the date of the correction, is the only BC my son is able to obtain. (I redacted the dates for this purpose to prevent identity theft.) 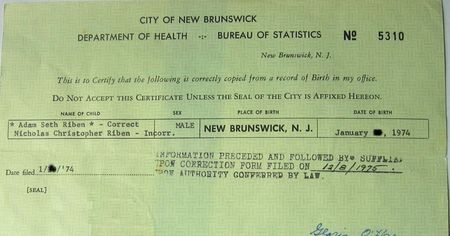 This is an amended BC. So-called "amended" BCs adoptees are issued, indicating no alteration or change, are intentionally deceitful. They were specifically designed to keep adopted persons from knowing they are adopted. They are state committed fraud and need to be stopped, not modeled on.

Molly Maness-Roberson and Kari Roberson, for instance, are seeking a change in the Texas law so they can both be named on their child's BC. Molly carried and delivered the child and is thus named as the mother. Their baby daughter was conceived, however, using Kari's egg and an anonymous sperm donor and they want Kari on the birth certificate. Does the egg donor get BC "credit" but the donor of the sperm does not? What of gay men who purchase anonymous eggs or those who purchase both egg and sperm and do not want them named, as is the most common scenario?

Do parents get to pick and choose who is on or not on the birth certificate? How do lawmakers adjust for all of these situations? Who is listed as "mother" when up to three women may have contributed to the conception, gestation, and birth...and yet another one or two plan to raise the child?

Adoptive parents - heterosexual or same-sex - understandably want, need, and must have verification of their parental rights and responsibilities for children they adopt or create via various reproductive technologies or surrogacy. There is no disputing that children need and deserve both of their social parents to be able to easily and quickly make necessary decisions for them regarding their education, health, etc.

All rights of parenthood can be obtained for same sex spouses such as Kari by adopting the child they are mutually raising. But gay and lesbian couples want more. They are challenging gender-specific parent identification language on birth certificates. Suzanne Bryant, an attorney in Austin who specializes in LGBT adoptions said the present Texas state BC application form "stigmatizes nontraditional families." They request states change the parent field on BC forms from "Mother" and "Father" to "Parent 1" and "Parent 2."

Would all forms and BCs be changed from Mother and Father to Parent 1 and 2, even for heterosexual couples?

Same sex couples such as Randi Shade and Kaya Shell reject the simple solution of adoption arguing that it discriminates against their children making the child "feel bad" for not having both of their parents' names on the OBC. This seems disingenuous. People generally do not see their birth certificates until they are old enough to obtain a driver license. By then, adolescents and young adults know about genetics and heredity and how babies are made and that they were not conceived by the two men or two women who are raising them just as inter-racial and international adoptees know that they were not born to the parents raising them. These children also have, in that time, established a relationship with whoever is raising and caring for them.

More importantly, a short form (also known as standard or an abstract) BC that certifies name, date and place of birth but does not list parents, is all that is required for school registration. Long form (or full size) BCs that list parents' names and addresses are only required for passports, dual citizenship, Indian Registry and immigration.

Why then should any person have a false and inaccurate BCs that belies what their eyes can see is untrue? They do not need a falsified "birth" certificate to tell them what they know: who their Mom(s) and Dad(s) are without their names appearing - in an obvious fraud - on their OBC as parents of birth. It is an unnecessary deception.

Texas State representative Raphael Anchia (D-Dallas) claims that: "To deny [children of same sex couples] a birth certificate that reflects their true and loving family is cruel." Really? Is it not cruel to deny them the truth of their genetics and heritage?

What is the Purpose of a Birth Certificate?

In an article discussing proposed rule changes to birth certificates in Texas, Joel Lazarine, director of Legal Hospice of Texas, in defense of naming both same-sex parents on a BC, suggests that a birth certificate "lists the names of parents raising the child." That is not necessarily so. Many grandparents, aunts and others - including foster and step-parents raise children without being on any original or amended birth certificate. They may or may not have legal guardianship but they do not have their names on any birth certificate. Further, note that no definition of a BC - dictionary or legal - contains the words "raise" or "care for." A BC is certificate of birth, not a certificate of parenting.

Lazarine also stated that in adoption biological parents' names are normally sealed in court records and "are irrelevant to the family as they raise the child." This is also not true and many adoptive parents would disagree. Today's evolved adoptive parents know the importance of heritage to the children they are raising. Many take internationally adopted children back to the country of their origins and others who adopt domestically often maintain openness with birth families.

Do BCs need modernization? Or do we need to get back to basics and maintain Birth Certriifcates as intended: certificates of birth, not necessarily parenthood

All of these proposed changes are based on the model set by adoption which was created as a secreted process in a time when being born "out of wedlock" was stigmatizing and infertility was not something people spoke about openly as they do today. Historians also note that infamous gray and black market baby brokers such as Georgia Tann encouraged these selective practices and unethical adoption practitioners continue to benefit from the lack of transparency.

In an era of shame and secrecy, social workers encouraged adopters to maintain the secrecy and not tell their adopted children they were adopted lest they would feel less a part of their families. States aided and abetted lies by sealing away OBCs and issuing falsely amended BCs.

None of this stigma and shame exists today. Times have changed and openness and honesty are now encouraged in adoption. The change we need to see in BCs is repeal of these convoluted, antiquated legally sanctioned lies, not more lies to accommodate a new generation of adopters.

Having two moms or two dads listed as parents of birth is being presented as another fight for same sex "equality" while, ironically, continuing to disregard adoptees' fight for equality in regards to access to their OBC since they became sealed. Adoptee rights advocates strongly object to adopted persons being discriminated against and denied their 14th amendment right to have the same access to their OBC as non-adopted citizens.

It is the right of every citizen to an unaltered, truthfully accurate certificate of birth. Events that occur subsequent to birth - sometimes by decades in the case of step-parent adoption - should be recorded separately rather than rewriting one's authentic history.

We can give all parents - gay or straight - everything they need to prove and protect their parental rights without denying their children their civil and human rights.