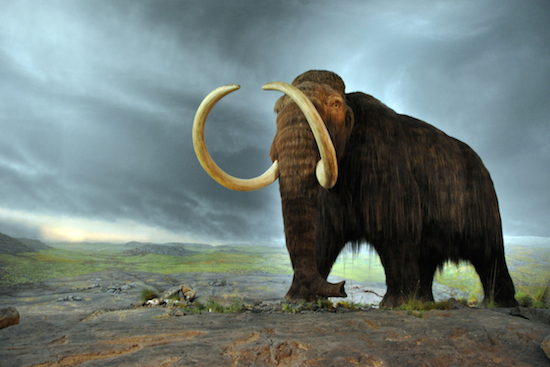 The last time mammoths lived on Earth, the Egyptian pharaohs were still playing with pyramids (look it up). While that's an interesting fact, even more noteworthy is the possibility that one day very soon, you and I could walk among (or at least kind of near for fear of being trampled to death) the mammoths.

Earlier this year, researchers working with DNA from dead woolly mammoths sequenced the long-tusked animal's entire genome. And now, a special laboratory has been set up in Yakutsk, Siberia -- just below the Arctic Circle -- with the aim of cloning these furry beasts.

Yep, you got it. Our long-lost friends the mammoths could very well suffer "de-extinction" and begin repopulating certain parts of the planet again.

That's good news for mammoths, I guess, but not such great news for the female elephants forced to act as mammoth-hybrid surrogates. The problem is, when humans introduce or reintroduce a species to a new environment, havoc is often the result. From cane toads and feral foxes in Australia to mountain goats in Washington State's Olympic National Park to rebounding-from-extinction gray wolves terrorizing American farmers, harm to ecosystems generally ensues.

Now imagine herds of mammoths running amok. Could happen. You never know. If that's what's in store for us down the line, scientists will have to find a predator to keep the mammoth populations in check -- or from migrating to warmer, dense-with-human climate zones as creatures that are a mix of mammoth and Asian elephant might prefer hotter locales. So naturally, we'll have to bring saber-toothed tigers back from extinction to help us cut down on our huge mammoth problem.

But maybe (stick with me here) our saber-toothed predators might experience a massive population explosion, thanks to a plentiful mammoth and human livestock (or perhaps just human) food source. We could hunt them, a sniper's wet dream, but what if they turn out to be much more elusive and intelligent than we'd imagined?

We'll simply have to dip back into the gene pool of extinct animals and come up with an even smarter, more fearsome predator to go after all of our saber-toothed cats. And presto! Some genius in an underground lab somewhere figures out how to cross a pterodactyl with a condor, and we'll end up with a fleet of ... well, bloody dragons, roaming the sky, looking for lunch.

Sound ridiculous? Yeah, it probably is. But just remember, it all started with bringing those pesky mammoths back to life. Fun with genetics isn't always fun for everyone -- Homo sapiens and an awful lot of other species included. Sounds like the premise to a pretty good movie, though ...