In Part 1 of this four-part blog series, we discussed how we believe Chipotle is misleading consumers with their advertisement videos "The Scarecrow" and "Farmed and Dangerous." The blog laid out the 3 definitions of farming that we believe Chipotle has gotten wrong. Part 2 expands on the first definition: The definition of a family farmer.

Chipotle's videos depict today's farmers as huge, industrial farmers, concerned not about ethics and animal welfare, but motivated rather by greed and money. Chipotle, of course, claims this perception is created in fictional satire and should be taken in jest, but one cannot deny these videos are promoting a negative picture of modern day farmers. I am here to say that this depiction could not be further from the truth!

There are over 2 million farmers in this country. Each of whom are working long hours, braving extreme weather, and tirelessly caring for land and livestock. How many of those farmers are family farmers? 96 percent of them, including the farm I work on with my brothers, my parents and my sister. In fact, I've never actually met a farmer who isn't a family farmer! Have you? I'm sure there are a few out there, but even then, do you really think a farm run by non-family members would operate any differently from those that are?

Understand this: The vast majority of farms are operated just like the family farm that I live and work on. We have many videos about how our operation works on our YouTube Channel and we hope that this can give you an idea of what a typical family farm actually looks like! 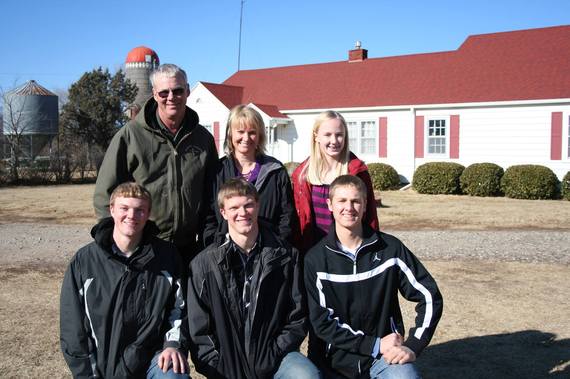 My family on our family farm.

These family farms are not the family farms from fifty years ago, however. Higher land prices and higher input costs have made it extremely hard to make much of a profit as a farmer, especially on a small farm. Few farming opportunities and the draw of a higher salary in the city have also led to a decline of young people returning to their family's farm. Many family farms have joined together to farm "corporately" (Our father and grandfather farmed together as a corporation, as will the Peterson Farm Bros) to help absorb the massive costs of running a modern day farm. These factors have contributed to a decline in the number of farms and the growth of the average size of a typical family farm. Thankfully, new technology such as larger equipment, GPS precision farming, and automated processes have allowed for farmers to farm more acres and raise more livestock per farmer, which has allowed agricultural production to thrive in recent years. Many family farms have thousands of acres of land and over a thousand head of livestock, including ours.

An "industrial farm" is considered a large-scale farming operation with over 1,000 acres of ground or over 1,000 head of livestock (otherwise known as a Concentrated Animal Feeding Operation). This definition fits our family farm and many others I know of. These bigger farms have allowed for greater food production on less land. In 1960, one farmer fed just 25 people. Today, the average family farmer feeds over 155 people and the average American spends only about 6% of their income on food, compared to 17% in 1960. Less expensive food has allowed for 98% of the population to spend all of their time doing something else besides raising their own food. How would you like it if you spent each day of your life growing your own food, instead of working at your current job and spending loads of time and money on family, leisure, and entertainment?

As you can see, the "industrial farming" Chipotle is so against is actually taking place on family farms just like ours. However, please hear me out! Do you really think bigger farms equate to wealthy, spoiled families and rich, powerful CEO-like farmers that Chipotle depicts? Of course not! Many large family farms still have trouble making a profit. Droughts, floods, blizzards, market prices, and equipment breakdowns can wipe away all of our profit in an instant. Farmers, no matter how big or small, still have to work crazy long hours, still have to get their clothes dirty, and still have to deal with the defeat and sadness of losing a crop or losing an animal to sickness. It's not an easy job. And that is why farmers use these methods and new technology, to make their job a little easier! 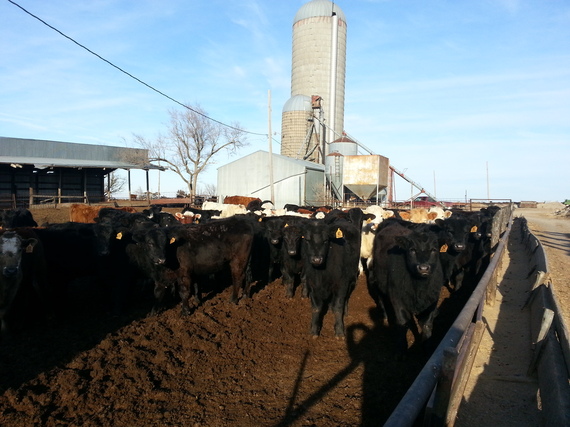 Cattle on our family farm.

Furthermore, just because family farming operations are bigger than they used to be, doesn't mean they have lost the ethical values every family farm was founded on! I firmly believe there is no better place to raise a child than on a farm, big or small. I was outside helping my dad feed cattle before I went to preschool. I learned to drive a tractor when I was 5. I put in my first 10-hour workday when I was in fifth grade. And I loved every minute of it! The farming community that I have experienced in my travels throughout the country is one represented by strong ethical values, hard work ethic, and legendary perseverance no matter what the size, type, or location. If you've met a farmer that doesn't exhibit these qualities, I would be extremely surprised!

Chipotle portraying larger family farmers as "industrialized" and "evil" is one of the biggest reasons everyone in the farming community has reacted so strongly to their commercials. It is a very skewed portrayal. In fact, I don't believe the words "industrial," "factory," or "corporate" should ever be associated with farms, due to their negative connotations and inaccurate depiction. If anything, Chipotle is the one who is an "industrialized, corporate" fast food company!

Stay tuned for Part 3 next week, which will explore the definition of a humanely raised animal. And check out The Peterson Farm Blog here.