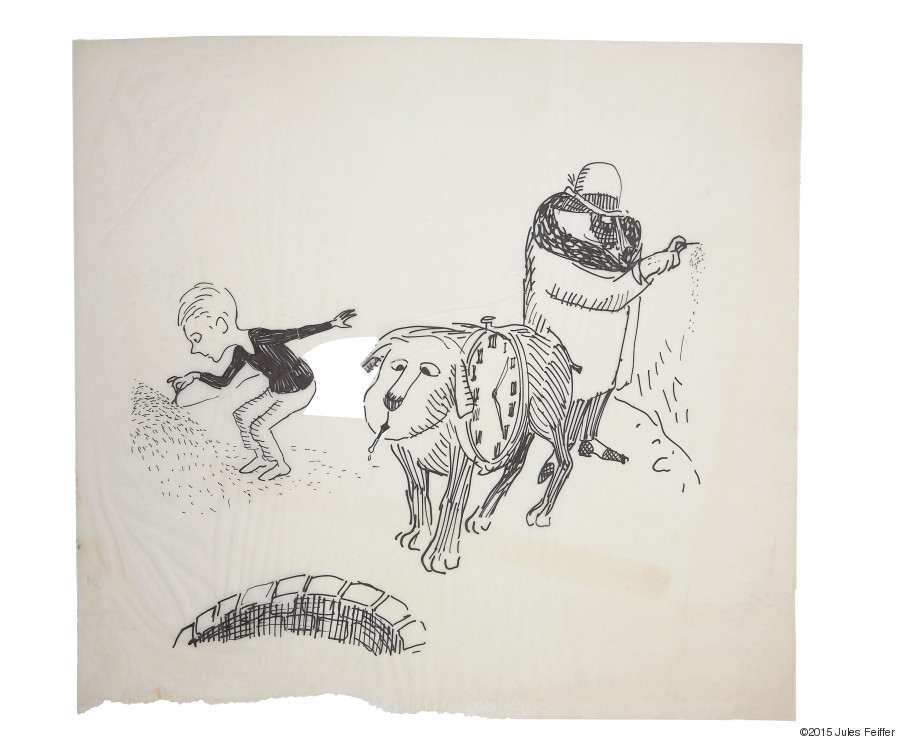 Though it's not a picture book, the collaboration between writer Juster and illustrator Feiffer produced such a harmonious marriage between words and images that Feiffer's sketches are thought of as inseparable from the text. In an age of collectible cover redesigns and repackagings, the original bright cerulean cover with Feiffer's scratchy drawing of Milo and Tock reigns largely uncontested, familiar to generations of young readers.

Feiffer, however, harbored doubts about his work on the beloved children's book. A new retrospective on his artwork, Out of Line: The Art of Jules Feiffer, by Martha Fay, sheds light on his ambivalence toward perhaps his most famous illustrations. Read an excerpt from Out of Line below: 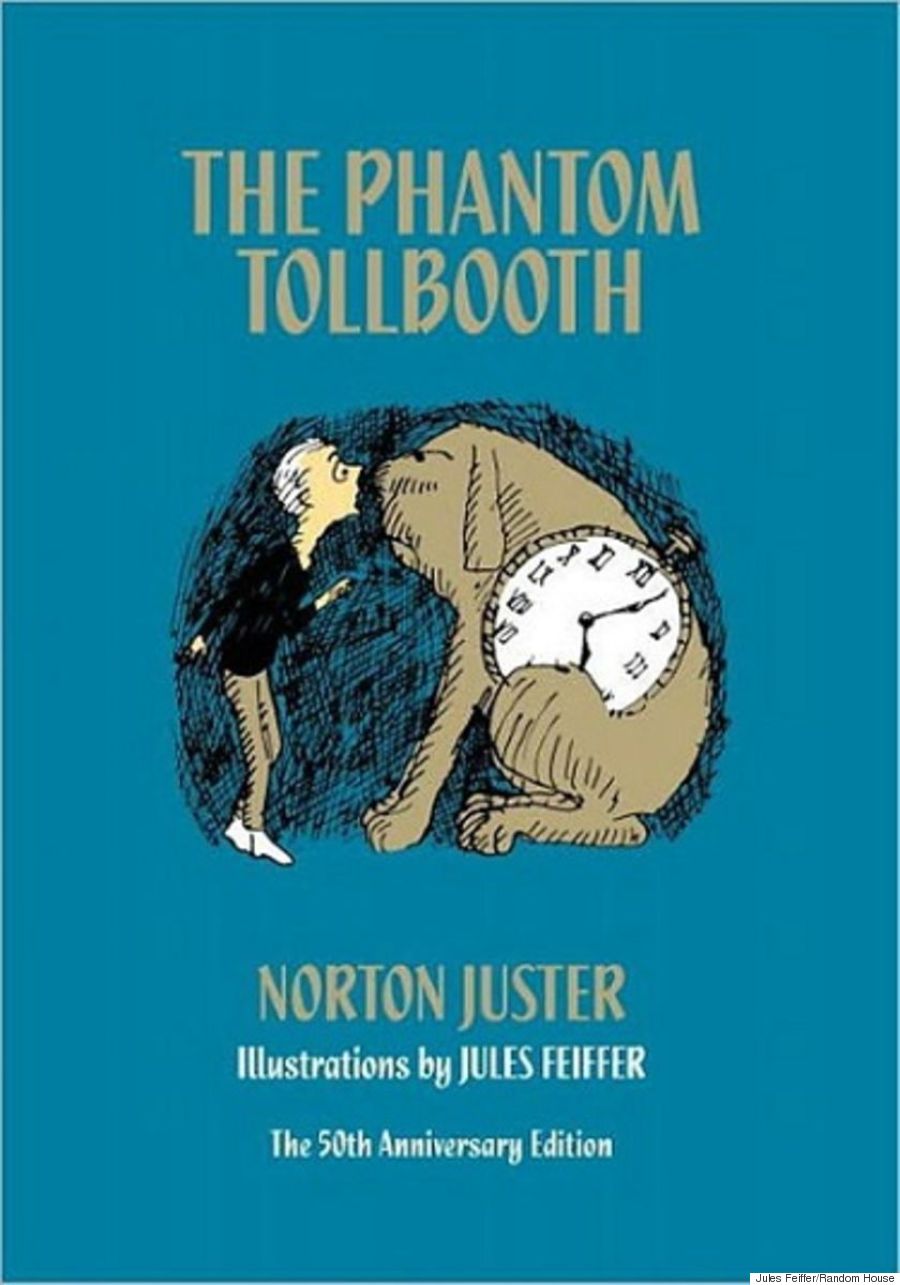 Another collaboration he had mixed feelings about during this period was The Phantom Tollbooth, written by his good friend Norton Juster. When Juster began writing The Phantom Tollbooth in 1960, he asked Feiffer if he would illustrate it. Feiffer agreed, but as Juster recalled fifty years later, he was on-and-off a persnickety collaborator.

“There are a lot of things Jules doesn’t like to draw or can’t,” Juster says. “Either he thinks he can’t—or he just doesn’t want to do it. When we were working on The Phantom Tollbooth, one of the things I wanted to do was maps. Feiffer could not or would not draw a map. So I drew the map, and he put a piece of tracing paper over it and did it in his line. 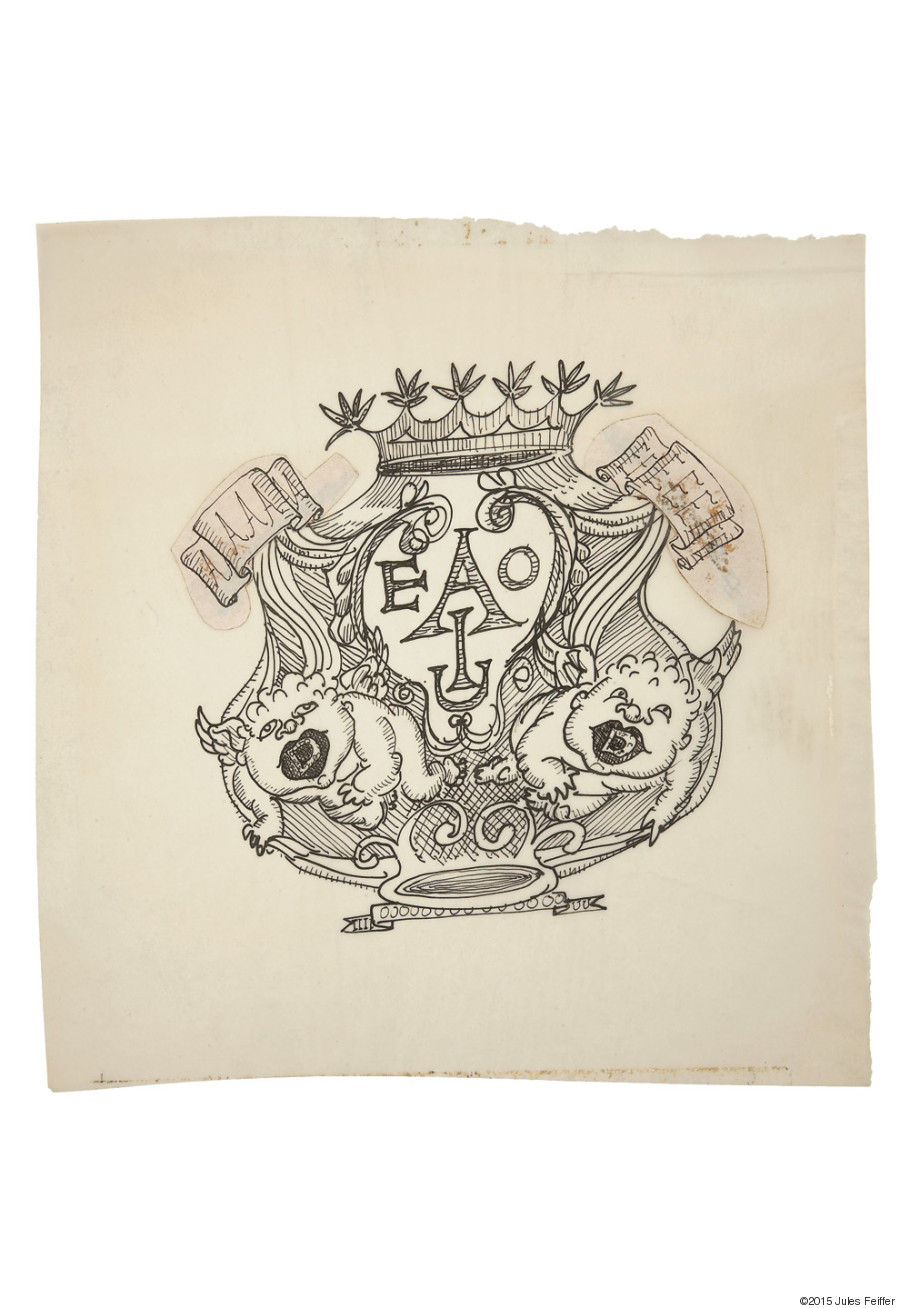 “When it came to doing the armies of Wisdom, who are supposed to be mounted on horseback, the first time he showed me the sketch they were all mounted on cats because he doesn’t like to draw horses. We finally compromised, and he drew two lines that simulated the idea of a horse.” 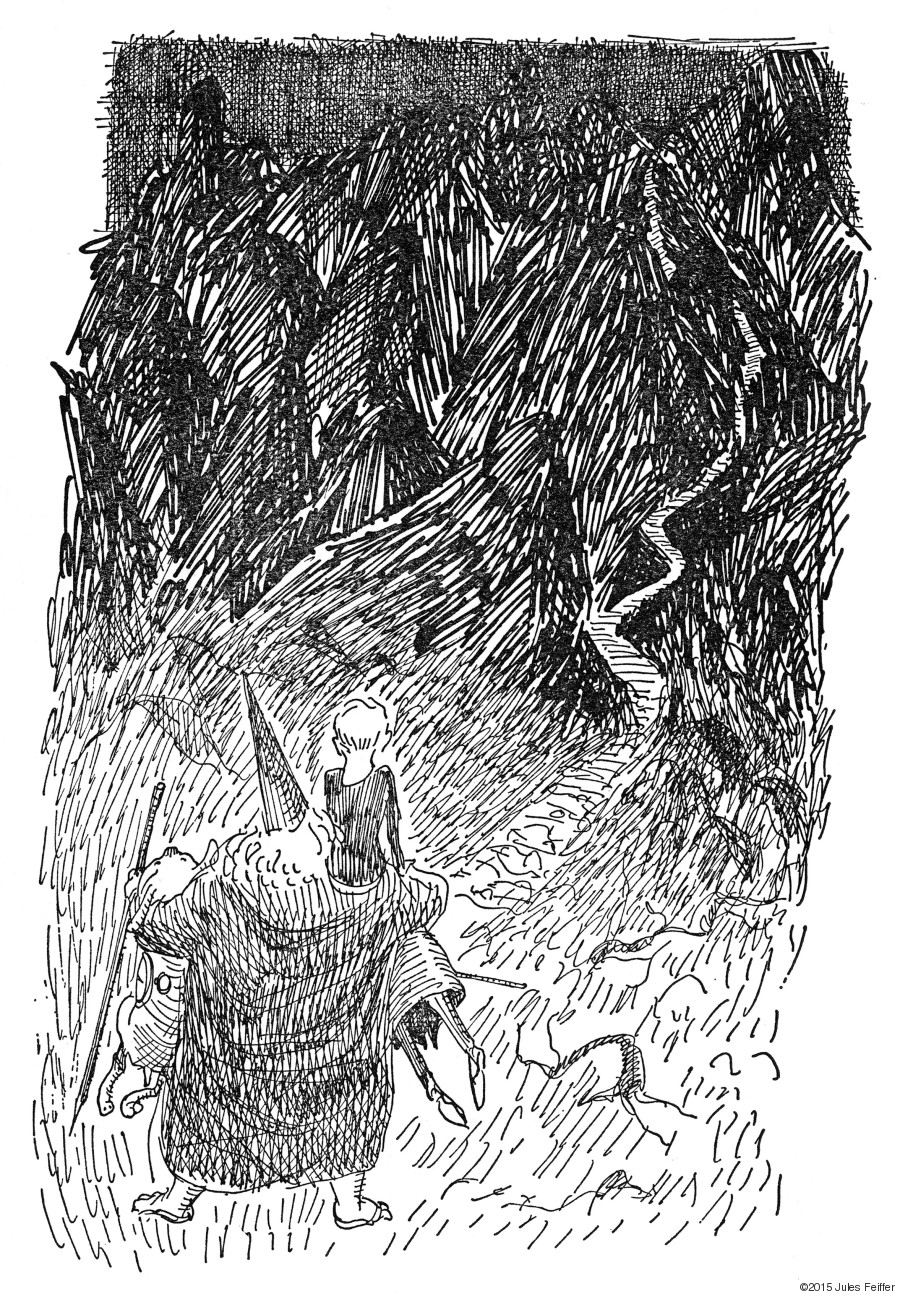 In fact, says Feiffer, not long after the two friends completed their second project together, after a half-century gap, “I had very little regard for what I did on The Phantom Tollbooth. I thought the text was brilliant, and I thought I was imitating illustrators who were better than I was. I did the art on tracing paper.

“Those illustrations are now legendary, apparently. People say they treasure them— they’re their favorite part of the book—and I don’t respond to any of this. I look back on the work and I think it’s good work, but I can’t say I have any visceral response to it. Unlike The Odious Ogre [2010], the last book I did with Norton. There I take great pride in the work, and I think it’s one of the best things I’ve ever done, and I take it out and look at it with great admiration. But I don’t look back at The Phantom Tollbooth, except for a few drawings, as an example of my work that I like to be reminded of.” 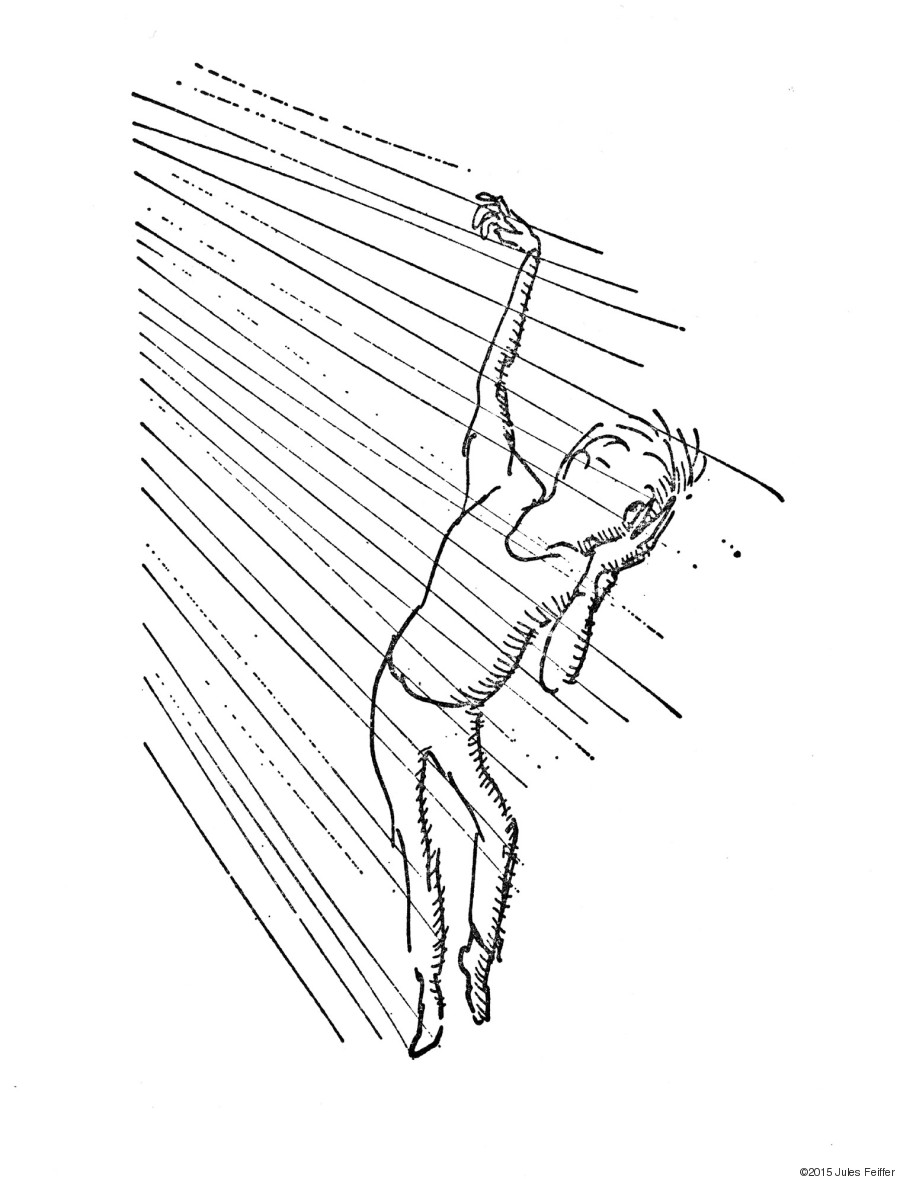 Feiffer’s harsh judgment of his work on The Phantom Tollbooth aside, the bestselling book remains a beloved classic. “If stylistically the Phantom Tollbooth illustrations are not quite all of a piece,” writes Leonard S. Marcus, author of The Annotated Phantom Tollbooth (2011), “that is because Feiffer was borrowing left and right,” from “Winsor McCay, James Thurber, Edward Ardizzone, George Grosz, Thomas Rowlandson, and on and on. Even so, he more than acquitted himself, infusing the drawings with a kind of coiled-spring energy and blitheness of spirit that perfectly suit Juster’s outlandish tale.”

Note: As we were working on this monograph, a cache of drawings Feiffer did on tracing paper more than fifty years ago turned up unexpectedly in his studio.

Excerpt from Out of Line: The Art of Jules Feiffer By Martha Fay ©2015 Martha Fay Published by Abrams

Below are unpublished preliminary sketches, model sheets, and alternate character illustrations for the book:

Alice in Wonderland
storymobs.ca
This really is a book about a land of wonder. The protagonist falls down a rabbit hole into a world of talking animals, disappearing cats and crazy queens. Created by Charles Dodgson, better known by his pen name Lewis Carroll, the story has been interpreted by some as being about drugs. However, we agree with Anthony Browne, an illustrator for the 1988 edition of Alice in Wonderland, who said the book was merely written to entertain. We reckon it's a book best read when you abandon your inhibitions, suspend your disbelief and just kick back and immerse yourself in Carroll's wonderful world.
James and the Giant Peach
Penguin
James Trotter is orphaned when his parents are eaten by a giant rhin. The orphan has to move in with his evil aunts who beat him, and generally make his life a misery. After being given a bag of magic crocodile tongues, James grows a giant peach, which he uses to escape his aunts. It's a wonderful story of adventure, hope, friendship and triumph through adversity.
Matilda
Penguin
Another of Roald Dahl's creations, this is a story of a child with extraordinary powers, with not so very nice parents. Matilda's courage and heroism prove you can succeed against the odds, even if you are surrounded by people who don't believe in you.
The Lion, The Witch and The Wardrobe
Who hasn't burrowed into the back of their wardrobe after reading this incredible fantasy tale? CS Lewis' novel of betrayal, redemption, sacrifice and honour is enough to inspire wonder in any reader, young or old.
The Faraway Tree
Newnes
Enid Blyton's stories revolve around three children who discover an enchanted tree which has magical lands at the top of its branches. A tale of adventure and travel, the fairytales are an enchanted escape into different worlds full of fascinating characters
Peter Pan
JM Barrie's creation of a boy who would never grow up was actually based on his older brother who died in an ice-skating accident the day before his 14th birthday. Neverland is portrayed as the ultimate childhood fantasy, where childhood is never--ending, fairies can make you fly and evil pirates seek revenge. It's a story which shows no matter how fun childhood can be, perhaps sometimes it is just better to grow up.