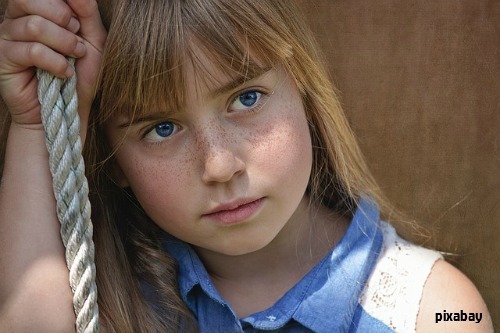 I settled into the chair as much as you can when the chair was made for a 9-year-old. I sat across from the teacher with excited anticipation. I have loved parent-teacher conferences from the time my oldest daughter entered Kindergarten. It's always a joy for me to hear how my kids are doing academically. I also look forward to getting insight into those little details about their day that I don't get to see at home.

Yet as I prepared to hear how wonderful Hannah is doing, the first thing I heard was, "Oh you know our girl; she's so hard on herself." Nobody knows this better than I do. My daughter is my mini-me in pretty much every way and while I had hoped she would inherit her Dad's easy going nature, she instead has my self-critical one.

Then the teacher pulled out a test she got a 75 on. The score was low because she got two questions wrong out of a possible 8. I asked how she did on the other tests and she got mostly 100's and a few 90's. I just knew that I was never going to mention this one low scoring test to her. If you've got a self-critical child like I do, you probably know that rule number 1 is you don't present them with the negative information first or at all if it's not necessary.

Prevent a Self-Doubt Shut Down

I know if I did, she would shut down and retreat into self-doubt. She wouldn't hear anything after that, not even my praise for the majority of her excellent scores. I know this because I'm the same way. I could hear a hundred great things about myself, but that one hurtful or negative thing will haunt me.

A Sprinkle of Praise

Hannah is also self-motivated and always has been. I never need to tell her to do her homework. In her spare time she's writing stories, reading or creating her own projects using recycled materials around the house. You don't ask a kid like Hannah if she's doing her best. She's always trying her best and she usually excels. But this is also slightly problematic for a self-critical child.

The higher the praise, the more it is expected and the bigger the devastation when something is hard for her. I have had to systematically try and teach her the lessons even I can't fully grasp in my thirties. Namely, that failure happens sometimes no matter how hard we try and we have to embrace it as part of the process.

Falling and Failing are Necessary

When Hannah tried to ride her bike without training wheels for the first time, she predictably fell within the first 5 seconds. The frustration and self-defeat was written all over her face. She has no poker face just like her Mama. So I told her that falling was a part of the process and she was not to get mad or blame me or herself for falling, because not only was it normal to fall, it was necessary to learn.

Fear of failure and perfectionism have been my biggest struggles. When I was a kid I could win 3 gymnastics meets in a row, but when I came in third once I wanted to quit. I felt like I was letting my team down. It perhaps is frustrating to deal with a self-critical child if you don't know how her heart really works.

Nobody knows their weaknesses better than self-critical people and the worst thing you can do is tell them to just get over it. They can't. That's the point.

Lead Them off the Anxiety Path

Recently, my daughter started wandering down the familiar path of anxiety. She was afraid she wouldn't complete a lengthy assignment at school. Not finishing something or not doing well is a constant source of anxiety for her. I get it probably better than most. So instead of telling her not to worry, I leaned into hear ear while I was brushing her hair and I whispered:

"I know you always do your best and there is nothing you could ever do that would make you a failure to me."

We both shed a few tears. It's probably what I needed to hear as a child, but didn't. It doesn't really matter whether it's implied or not. The self-critical child typically knows they are loved. That's not the problem. What they forget is that there are no strings attached to it.

I recently completed a life-long goal of writing a book. So I turned the example around to me and said to Hannah, "Will you still love me if nobody buys my book?" "Of course," she said.

There is no loving someone for what they achieve. You can be proud of what they achieve, but really you love the heart of the person. That's what is undeniable about my kid; her amazingly big heart.

Self-Critical Does Not Equal Broken

So while I sat in that tiny chair and listened to her teacher talk about Hannah's self-critical nature and crying in class, I knew it was meant to be something I'm supposed to "work on with her," but here's what I really wanted to say:

Hannah doesn't need to be fixed. She is perfect, tears and all. The high achievement you see in the classroom comes from her, not from us as her parents. She wants to do her best, not because we expect it, but because she expects it of herself. The tears are the cost of greatness.

She Will Grow Into It

She is not going to grow out of it. I certainly never did. What will happen is that she will grow into it. She will eventually learn to temper her high expectations with the reality that failure is not only possible, but that it's necessary sometimes.

While some of her classmates' parents opted them out of the state test this year, I didn't. It might seem strange knowing that she's a self-critical kid, but I knew she would do fine and she did.

While I can't change the tests the world will throw at her, what I can do is show her that the tests don't define her. There is nothing she can ever do that would make her a failure to me and I will keep saying it for as long as she needs to hear it until she knows it for herself.

This post originally appeared on The No Drama Mama, where you can find more posts on family, faith and frugal living from this "tell it like it is" mom of three. You can also follow Erin on Facebook.

Author of “So, You’re Broke? 18 Drama-Free Steps To A Richer Life” (available on Amazon), and blogger at The No Drama Mama.com.

Incensed and Insulted: This Is Why Single Parents Are Still Furious With Dominic Cummings