Do YOU know how to use the phrase "begging the question"? No? That's okay; most people don't.

It is commonly misused, as people typically confuse it with "raising the question." But that's simply incorrect.

Why do people continue to use this confusing phrase if they don't know what it means? My running theory is that people use it because they assume it makes them sound smarter.

I went to a small liberal arts school as an English Literature major, so I was used to hearing people misuse words and phrases all the time in order to sound intelligent.

Here is how a typical literature or literary criticism class would go, after which the room was filled with bewilderment that he had had the gall to say something so ridiculous:

HIM: Well, all language is transparently referential, as my fellow colleages know, and so that begs the question: on a meta level, does language have any real meaning at all?

ME (in my head): WHAT IS HE TALKING ABOUT?! IT DOES NOT MAKE ANY SENSE!

In the long run, misusing phrases like "begging the question" doesn't make you sound smarter. It makes you sound dumber.

But, please, don't feel bad about yourself. Even New York Times writers admit that this is a common mistake among their team, and they're the freaking New York Times. Philip B. Corbett lists some instances of the phrase's misuse in the paper.

I also really appreciate Corbett's example of a misuse and correct use of "begging the question" in the New York Times blog.

Person A: I can't understand why all the news media give so much coverage to Lindsay Lohan. It's ridiculous.

Person B: I'm sure they do it just to sell papers and magazines.

Person A: Yeah -- which begs the question, why do people want to read about her?

So, what is the actual definition of "begging the question"? It's a type of logical fallacy where a statement refers to its own assertion to prove the assertion.

WHAT?! What the FUDGE does that even mean, you ask?

Well, here's Corbett's example of the proper use of "begging the question":

Person A: I can't understand why the news media give so much coverage to Lindsay Lohan. It's ridiculous. She's not that important or newsworthy.

Person B: What? Of course she's important and newsworthy! Lindsay Lohan is a big deal. Why, just look at the newsstand. People magazine, The Post, you name it. She's everywhere.

So, why do we even use this phrase in the first place? Where does it come from?

Because of the phrase's widespread misusage, academic linguist Mark Liberman has suggested abandoning it entirely. He reasons that because of all the shifts in language and language meaning over the years, the relationship of the phrase's literal meaning to its figurative meaning is unintelligible, and now only serves to confuse people.

Corbett also notes that "the phrase is so widely misused, some readers may be confused even when it's used correctly."

There are, however, SOME people who actually know what this phrase means. These people banded together and started the BTQ Group (in case you haven't figured that out, BTQ stands for "Begging The Question"). They understand that this phrase's misuse is a huge issue, and began making these easily printable BTQ cards to help fix it.

Now that you, my dear readers, understand what "begging the question" is (and trust me, you're way ahead of 95 percent of people), you can hand out these cards every time someone misuses it. You'll spare yourself from looking like the grammar nerd in the room (if you are uncomfortable with being that person) and you'll spare the speaker from embarrassment (unless, of course, you think they deserve to be publicly embarrassed).

This group even sells merchandise so you can help spread the good word.

Still kind of in the dark as to what exactly this phrase means? This comic from Ryan North breaks it down pretty easily. He even uses dinosaurs! 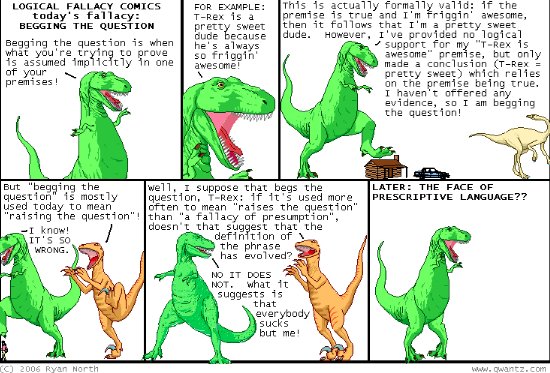 What phrase are you sick of hearing be misused? Let me know in the comments, and I might address it in my next column!

CORRECTION: An earlier version of this article stated: "But, please, don't feel badly about yourself." It has been changed to "bad" and the author is duly embarrassed.