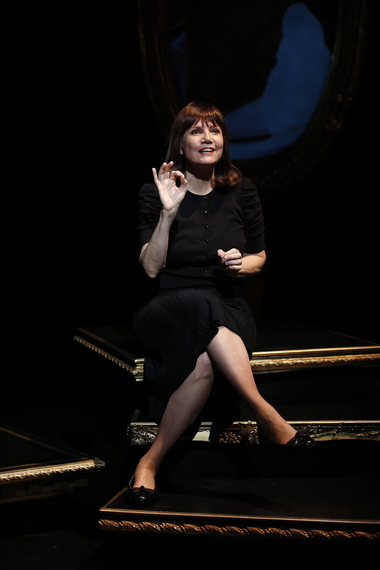 Mona Golabek in The Pianist of Willesden Lane, photo by Carol Rosegg


On a Friday afternoon in Vienna in 1938, fourteen-year-old piano prodigy Lisa arrives on the trolley for her lesson to discover that Mahler Street has suddenly been renamed Meistersinger Street. Her teacher sorrowfully, shamefacedly sends her away; a new ordinance commands that teaching a Jewish child is forbidden. Weeks later, she watches from her window while her father is beaten and humiliated in the street below. It is November 9, 1939: Kristallnacht.

Papa was out, that night, gambling; he has managed to win a precious ticket for the Kindertransport, a program in which 10,000 children were allowed to leave Nazi-controlled countries for shelter in Great Britain. While Lisa--performed by her daughter, concert pianist Mona Golabek, in The Pianist of Willesden Lane at 59E59--evades the discussion by playing Debussy's "Clair de Lune," the parents decide that their middle daughter should be given the passport to evade what we now know was virtually a death sentence. Lisa is transported to London, where she lives in a house converted into a dormitory for 17 refugee children, working as a seamstress sewing army uniforms. (Her never-to-be-heard-from-again father was a tailor.) Rather than crawling into the bomb shelter every night during the Blitz, she hides in the basement and avoids the terrors until the evening the house is destroyed. All the while, she pounds away at the grand cadenza from the first movement of Grieg's Piano Concerto in A Minor.

If this sounds like the basis for a powerful evening in the theatre, rest assured: The Pianist of Willesden Lane is grippingly wrenching almost past endurance. Hershey Felder--an accomplished pianist who has created something of a personal factory of one-man shows featuring himself at the keyboard narrating a musical life (Gershwin, Beethoven, Bernstein)--has adapted Goldabeck's 2003 memoir ("The Children of Willesden Lane: Beyond the Kindertransport") and directed it. The piece premiered at the Geffen Playhouse in Los Angeles in April 2012, followed by engagements in Boston, Chicago, and at the Berkeley Rep; the New York engagement is presented by the Geffen.

The play is stunning on several levels, and presumably not viable without Golabek center stage. For the author not only plays her mother (as child and adult), but she plays it for us: Beethoven, Chopin, Bach, Rachmaninoff and even Gershwin, plus the all-important Grieg Concerto that is threaded through the 95-minute piece. Sitting at the Steinway concert grand that takes up most of the floor space--the set otherwise consists of four oversized, gilded "mirrors," which serve as projection screens--Golabek offers recital-hall quality excerpts, one after the other. (Some of these are accompanied by a full orchestra, on tape.) The music is not simply used for effect; it is woven into the narrative, chosen (presumably) from Lisa Jura's own repertoire, and at key places serves to wipe out the words that describe the horrors.

Praise is superfluous for a performance like this. Golabek strikes a chord--literally so--that turns viewers not only speechless but at times veritably breathless. That said, I expect that The Pianist of Willesden Lane will have a difficult time reaching an audience; not many entertainment seekers are looking for powerful Holocaust accounts that promise to put them through an emotional wringer. Even so, this is a stunning and haunting theatrical piece. Those of you who make your way to 59E59 before August 24 will find your own reward.

The Pianist of Willesden Lane, adapted by Hershey Felder from the memoir by Mona Golabek and Lee Cohen, opened July 22, 2014 at 59E59