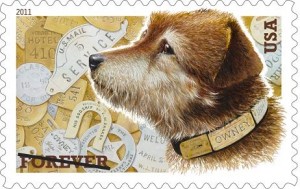 Owney was a muttly terrier who rose from the ranks of the homeless to celebrity status with his image on the new forever U.S. postage stamp. His life was that of a courageous 19th-Century pioneer pup, fighting the odds, if not the Indians. Although his life story has periods of unknown activity, as befits an independent type like Owney, it is sometimes necessary to fill in the blanks with an imagined version of probable events. Here, then, is a mostly true tale of as brave a being as ever worked in a branch of the government explicitly authorized by the United States Constitution.

Owney was born in Albany, New York. Probably. One can never tell with a one-night stand. He may have been born in 1886, 1887 or 1888, more or less. You see, births were not registered back then unless you were human. Owney badly wanted to be human and even more than that, he wanted to be a mailman in the RMS (Railway Mail Service). Some say that Owney began his career walking to work with a human postal clerk who took a shine to him and let him hang out at the work place. Others believe Owney simply crept into the post office, unnoticed, and began his career that very day, when he fell in love with a mail pouch.

Owney developed a passionate and lasting affection for ordinary mail pouches that were transported by train and mail wagon. One day, a sack of mail fell off the mail wagon Owney had hitched a ride on, and he jumped off the wagon and onto the sack, guarding it until the driver could retrieve it. 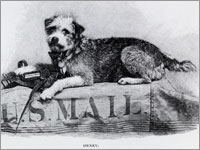 It is fair to say that Owney idolized those bags even more than the humans who dealt with the mail they contained. Perhaps, since mail sacks were used by mailmen on their routes as shields against unfriendly canines, it was the scent of all those other dogs that so fascinated Owney. Whatever the reason, Owney was in love and decided to stay forever. In fact, he did even better than that, he also traveled with them. It wasn't so much that Owney wanted to ride the rails, it was more that he followed the mail sacks onto mail wagons and then onto mail trains, riding along with the bags wherever they went. He was even known to leap from one mail train right onto another.

There is no proof that Owney helped railroad's mail personnel sort the mail while in transit, becoming the fastest sorter of all time, but there's no proof that he didn't.

Despite the then-common danger of train wrecks and derailments (and perhaps holdups by Butch and Sundance, the Younger Brothers or Jesse James), when 80 mail clerks were killed and over 2,000 injured, if Owney was aboard, no train ever met with trouble. He was considered by the RMS to be a good-luck charm, and adopted as their unofficial mascot. 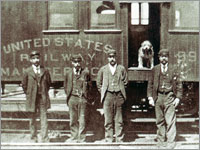 Owney was a jet setter long before jets were invented. First he traveled across New York State, and then across the entire nation, and in 1895, Owney went around the world, traveling with mailbags on trains and steamships all the way to China, Japan, The Suez, Alaska, Mexico, and across Europe before coming home to Albany. We know this is true because The National Postal Museum in the Smithsonian says so.

The kind people Owney met on his many trips began to give him gifts to wear on his collar in the form of medals and tags with their town's name. One tag reads "Presented to His Dogship by F.M. Parker." In 1894, a reporter for the Brooklyn Daily Eagle wrote that "Nearly every place he stopped, Owney received an additional tag, until now he wears a big bunch. When he jogs along, they jingle like the bells on a junk wagon." In fact, he had so many that when Postmaster General John Wanamaker heard that the weight on Owney's collar was getting awfully heavy, he gave Owney a special harness to lighten his load. 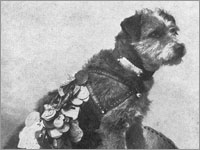 Knowing that Owney lived an exciting and useful life makes it somewhat less depressing to learn that he did not die of old age. Alas, after debarking a mail train in Toledo, Ohio in June 1897, and under shady circumstances at best, he died of a bullet wound. Perhaps it was an accidental shot by Ohio's crack shot, Annie Oakley, when she was cleaning her gun, or revenge by someone who mistook Owney for his wife, or a thief who tried to steal a mailbag guarded by Owney. He died as he lived, brave and strong, representing the U.S. Post Office.

Owney was so beloved and the loss so greatly felt, that ordinary mail clerks raised enough funds to preserve Owney forever. Even after death, Owney was still traveling, and was moved to Post Office Department headquarters in Washington D.C. He traveled yet again in 1911 when he was reassigned to the Smithsonian where he still resides, attracting dog-loving visitors.

Owney is right up there with Lassie, Old Yeller and Benjie with many books written about him: Owney The Post Office Dog and Other Great Dog Stories, by Joe L. Wheeler; The Further Adventures of a Lucky Dog: Owney, U.S. Rail Mail Mascot by Dirk Wales; Owney the Mail Pouch Pooch, by Mona Kerby; A Small Dog's Big Life: Around the World With Owney, by Irene Kelly; and All Aboard, Owney! The Adirondack Mail Dog, by Jennifer Gordon Sattler.

Not only all that, but you can check out "The Story of Owney" video.

Even though Owney himself may be no longer technically alive, his spirit lives in the hearts of all who know of his dedication and abiding love.