The "recent" migrant issue isn't really recent at all. People have been forced out of their homes and countries for many reasons throughout the entirety of history, and this problem isn't going away anytime soon.

The most recent migrant crisis has been building up for nearly a year now. Syrians originally started fleeing their homes because of the Assad regime, but since then it has become fleeing from ISIL. According to a UNHCR graph depicting the dramatic increase of refugees by month comparing 2014 and 2015, nearly every month from April to June has seen the numbers nearly doubled more or less. The real issue is that there are all of these people who can't return to their home country, and most European countries won't accept them either. 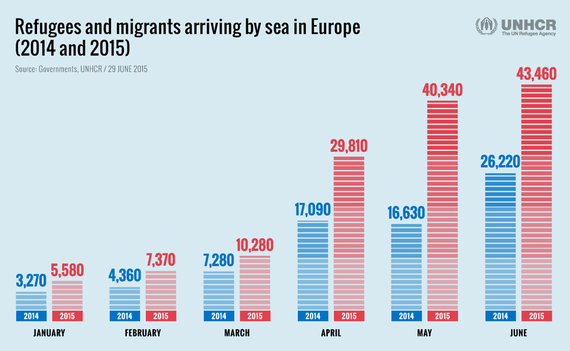 A recent article on Vox, written by Max Fischer and Amanda Taub, gives a pretty clear view as to why these countries aren't accepting refugees regardless of the dire situation. "Europe, like a lot of places, has pretty robust anti-immigration politics. The British tabloid press, for example, has for years scaremongered about the supposed threats from refugees and migrants. Such politics, in Europe or elsewhere, often get described as being about pure racism or xenophobia, but in fact they're about something a little different: a fear, rarely articulated, of changing demographics and civic identity. Taking in large numbers of refugees requires accepting that those refugees might bring changes to your nation's identity or culture. And while that change is often economically and culturally enriching, it can still feel scary. " America isn't any less xenophobic either.

While America is voluntarily taking in refugees from the Middle-East, they do it very bureaucratically. Since America isn't dealing with the issue of these people crossing their border and then requesting asylum, a much longer, more selective process can be utilized to pick and choose who to accept and who to deny. Rep. Mark McCaul, who chairs the Homeland Security Committee, said to The New Republic, "The Obama administration has provided virtually no assurances that the admission of Syrian refugees will not pose a national security threat to the United States."

Even ignoring the refugees from the Middle-East, the American attitude towards the southern border is becoming increasingly hostile thanks to the recent focus from the Presidential race right now. These "illegal immigrants" are, in many cases, actually refugees. While I worked with the IRC, there was a 14-year-old boy there who traveled only with his little brother to America from Honduras to escape the constant threat of gang violence. His whole story is amazing, and what it made me realize is that everyone single one of these refugees, regardless of where they're from, are all individuals. They all have gone through a horrific experience that forced them to leave their homes to save their lives and the lives of their loved ones. These are people who have risked life and limb to keep the people who they love safe, and the countries that can help them are treating them like this was their choice to leave their home. These are all people who are trying to survive, and they are all being viewed as needy and criminals when no one is taking the time to listen to their story and their struggle.