Captain Planet was an idea that was clearly ahead of its time when the show debuted 20 years ago, before "global warming" had become a household term. However, its creators were smart to realize that the battle to protect the environment would be a generational one, and they chose the side that always wins such battles: the future. 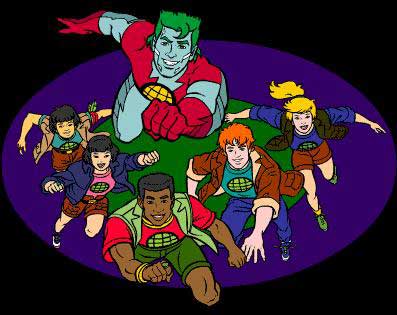 It has been heartening for me to see how enthusiastically children have embraced environmentalism -- though when I think about it, I shouldn't be surprised. When parents tell children to clean their rooms, eat a healthy but untasty food, dress in appropriate but uncomfortable clothes or do something else against the child's will, it's usually in service of a value system that children don't understand, don't see as their own, or don't understand the consequences of. Why would a kid want to clean up his toys in service of "tidiness" when they're so much easier to find on the floor? Why would a kid want to wear clothes he hates to spare his parents from a sense of societal shame he can't understand? Being forced to do what someone tells them for little or no clear gain leaves a child feeling powerless at a time when kids are painfully aware that they have little or no power over anything.

Then tell them that they can stop this from happening. In fact, they're the only ones who can stop it. Then see what happens.

There's nothing that a kid wants more than to be treated like a grown-up, and nothing makes a kid feel more grown-up than being given responsibility for something that is important to them. And could anything be more important than our planet and everything that lives on it? Tell children that they are responsible for protecting the planet and they'll find ways to do it that you couldn't possibly imagine.

This is part of the genius of Captain Planet, whose parting phrase to his young, international Planeteers was always, "The power is yours." Captain Planet was the Planeteers' servant, not their leader, and it was the duty and responsibility of children around the world to take care of and improve the planet they have inherited.

It makes me think of another wonderful piece of environmentalist entertainment for kids -- Pixar's 2008 film WALL·E. See my ReThink Review of WALL·E below.

In the moment that comes closest to an overt environmental message in WALL·E, the Captain (voiced by Jeff Garlin) and Auto, the autopilot of the Axiom starliner, have this exchange about returning to an earth spoiled by pollution and waste:

Captain: Out there is our home. HOME, Auto. And it's in trouble. I can't just sit here and...and do nothing! That's all I've ever done! That's all anyone on this blasted ship has ever done. Nothing!

AUTO: On the Axiom, you will survive.

Captain: I don't want to survive! I want to live!


Essentially, the anti-environmentalists are offering the Auto option: Do nothing. Change nothing. Improve nothing. We can keep cutting down trees, polluting the air and water and killing animals for a while longer until we need to start protecting them...someday. The world can get dirtier before we make it cleaner...someday. In essence, they are telling kids (and adults) to avoid responsibility, to remain babies forever, with the hope that some magical parent will come along to clean up our messes...someday. It's hard to think of anything less inspiring.

But something we all want -- adults or kids -- is to be inspired. For millions around the world, Captain Planet did just that. And now, on his 20th birthday, he's ready to do it again -- but he can only do it with your help. If you or someone you know has what it takes to be a Planeteer, visit CaptainPlanet.me and join the Global Planeteer Movement.