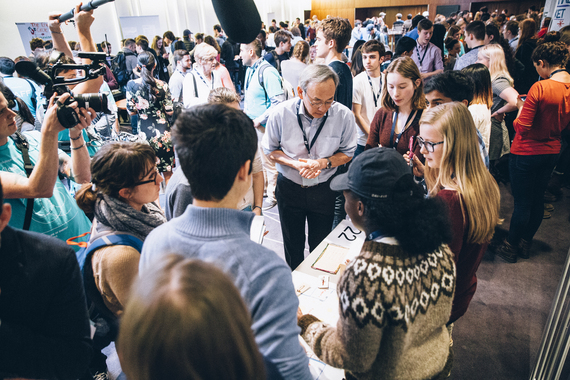 On March 21, 2016, the lobby of the Hilton Nordica hotel in Reykjavík, Iceland was not your typical scene. Kids from all over the United States wandered around the lobby, snacking on coffee and fries. They were not gossiping, scheming, or doing anything you would expect a group of 700 jet-lagged high-school students to be doing. Rather, they were discussing the future of energy, contemplating environmental conservation efforts, and developing plans to improve energy consumption in their own American communities. They were all attending the EF Global Student Leaders Summit, a leadership conference created for high school students to brainstorm new and innovative ideas for the future of energy, and to hear from a roster of esteemed speakers, which included William Kamkwamba, Dr. Steven Chu, and Jessica O. Matthews.

Why would young people want to travel to a distant, cold city on their spring break, when they could be somewhere warm and relaxing? Because every student at the Summit shared one thing in common: a personal mission and deep-seeded passion to change the future of our planet for the better.

Their motivations for wanting to do so varied, but each and every one of them ultimately had a unique and compelling story to tell. So, while there, I decided to listen. I wanted to discover why these student leaders came to the Summit, what they planned to fix in their communities when they returned home, and what they were hoping to learn from their experiences in one of the most energy-independent, cleanest, and energy progressive countries in the world.

Ashley Gifford pulled at her hair before finishing her bitter story. "So we don't know yet if they're planning to take the cars and fix the computer problem...but I can say for sure that my next car probably won't be a Volkswagen." Ashley's 2014 Jetta tdi was one of the cars included in Volkswagen's "Diesel Dupe" scandal and she is now stuck driving a car that is significantly more poisonous to the environment than suggested by the manufacturer at time-of-sale. To make matters worse, she lives in West Virginia, a place where people rely on their cars as their only form of transportation. "My mom has a car, my dad has a truck and a company truck, and I have a car. And then, when my sister turns sixteen, she'll get a car. That's the only way we can get around... it's not just that every family has a car, it's every family member has a car." Realizing this, and recognizing the necessity of car transportation on a day-to-day basis, Ashley wants to find a cleaner alternative to gasoline for the people in her small town.

Other students at the Summit were motivated by issues similar to Ashley's. Sigurjon Agustsson for instance, an Icelandic student, realized that despite Iceland's clean heating and electricity output, and the country's carbon-conscious attitude, Reykjavík's public transportation system was not up to par. Because the city is so small, the buses in Reykjavík are essentially superfluous. Even if people need the bus, it's often not reliable and the wait time is too long to be convenient - something I can attest to, as someone who has experienced Reykjavík's bus system first-hand! To make matters worse, the buses run on diesel fuel. If Reykjavík is going to have any kind of meaningful public transportation, Sigurjon wants trains, like the subway in New York City, or the Metro in Washington D.C.

Megan Crouse, an energetic student from Columbus, Ohio, also recognized the issue of gas pollution in her town. "In the mornings before school, people wait in their cars, and they burn so much gas... there's four rows of streets that are completely packed with cars in the morning." She sighs emphatically: "It's such a problem."

During his talk, Nobel Laureate and former U.S. Energy Secretary Dr. Steven Chu had some advice for people like Ashley and Sigurjon. Some of it was comic - he proposed an electric car powered by a battery that "lasts as long as a human bladder: on road trips, when it's time for you to discharge, it can recharge." Some of it was practical. Dr. Chu challenged the audience to examine recently introduced alternatives to liquid transportation fuel. Most importantly, he instilled in the audience a sobering sense of urgency, emphasizing the fact that "the youngest people, the next generations, will have to make the most sacrifices."

The student attendees of the Summit were moved by Dr. Chu's words. We all know we have a responsibility to make the world cleaner. But with such a huge challenge, where should we begin? Megan hopes that her time in Iceland, experiencing clean air and clean land first-hand, will give her ideas for how her community could adopt better habits about the way it uses energy. She was inspired by Ólafur Ragnar Grímsson, the President of Iceland (and surprise Summit guest), who reminded students of the power of inspiration, declaring, "Until you experience it up front, clean energy is a vague concept."

Ashley knows the issue she wants to tackle when she returns home to West Virginia. "Everyone [in my town] works in oil, gas, or coal. Both my parents are employed in the industry. I want to help people understand how cleaner energy sources can work for West Virginia too. My state is, for the most part, a poor state. [An alternative to fossil fuels] would have to be an energy source that was readily available, but also inexpensive enough for the people of West Virginia to be able to use and afford it." Ashley represents the people who will suffer if oil and gas are replaced by a more expensive - or less convenient - alternatives. She wants to use what she learned at the Summit to bring her important perspective to the energy debate while promoting alternatives to fossil fuels in communities throughout West Virginia.

Meanwhile, Bouchra Benghomari and Zahyyeh Abu-Rubieh, from Cambridge, Massachusetts, have already taken the first steps towards making a change in their community by creating and distributing tool kits to residents of affordable housing developments as a way to minimize wasted energy and the costs associated with energy inefficient construction. Bouchra and Zahyyeh attended the Summit to gain a wider view on what other communities around the U.S. are struggling with, and how Iceland has already addressed many of the same challenges, so that they can apply those problems to new projects back in Cambridge.

After hearing from the speakers and attending workshops to learn about the various new methods of conserving energy, students felt like they had a better idea of what needed to change in their communities back home. When asked what she's going to take away from the Summit, Ashley told me that she was inspired by her workshop with Alex Loznak and Victoria Barrett (two plaintiffs in the climate change lawsuit against the Federal Government) on taking political or legal action to fix a community. She plans to write to her state's legislature, asking that they require car dealers to inform the buyer about how much damage the car does to the environment prior to purchase. Sigurjon also wants to write to the city government of Reykjavík about the implementation of a train system. 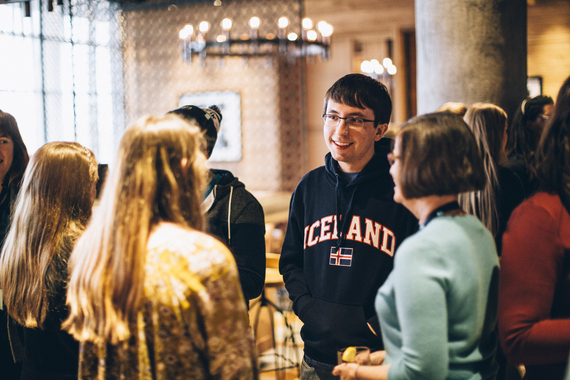 Regardless of what they decide to do, we all now know that the first step to making a difference can be a small one. I took William Kamkwamba's advice to heart: "Start small, and grow from there. Start locally, even personally. If you are the one facing the challenge, you will be better equipped to overcome that challenge."

We may have arrived in Iceland unsure of what to expect or what to do; but we departed from the Summit having learned from leaders in energy innovation, and inspired by the land and people of Iceland. Armed with a purpose, each of us left with a taste of what the future could be like if our communities worked together to become cleaner about the way they use energy.

The next generation is quickly learning about and feeling the effects of pollution. And young people understand that the future is their own, and that they have the potential - and the greatest reason - to shape that future for the better.

Sofia Kruszka is a high school junior from Alexandria, Virginia.

This post is the first in a series produced by The Huffington Post and EF Educational Tours about the recent EF Global Student Leaders Summit, which explored the future of energy from Iceland. The Summit series combines educational travel with a two-day leadership conference, and asks students to tackle global challenges in places where those challenges are notably present or well-addressed. To view all posts in the series, visit here.