Those outside the profession usually think plastic surgery derives its name from the synthetic polymers (plastics) fundamental to many of this field's procedures. But in fact, the 'plastic' in plastic surgery comes from the Greek word plastikos, which means 'capable of being shaped or molded'. This adjective was used by the surgeons pioneering this field in the early twentieth century to describe the restoration of bodily form or shape, which is the fundamental role of plastic surgery.

Ironically, plastics have become increasingly useful for plastic surgeons because of their extreme moldability and biocompatibility. (Biocompatibility refers to the material's composition and surface characteristics which allow it to be accepted by the patient without any allergic or inflammatory reaction). Plastics are particularly useful when surgeons are trying to replace tissues that have been lost or damaged, whether it be for a trauma victim or a patient who received "botched" plastic surgery.

Breast implants are the best known example of plastic material used in plastic surgery, but plastics can also be formulated to mimic and restore certain facial bones. Synthetic plastics are used to replace skull bones lost after accidents, reconstruct facial bones misshapen after trauma, and most recently to build up certain facial bones which have been shown to lose their volume with aging.

Many of these procedures rely on the use of computerized tomographic (CT) scans to precisely identify the deformity, guide the surgeon during reconstruction, and even manufacture implants customized to the patient. The figure below shows a three dimensional skull model derived from CT data of a patient who lost part of his skull and left orbit bones in a traffic accident. The image on the left shows the defect and the image on the right shows a plastic implant custom made to replace the missing skull fragment. 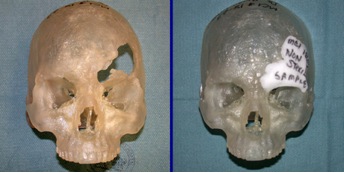 The CT scan below on the left shows a patient who suffered right cheek bone fractures, while the CT scan on the right shows how porous polyethylene implants were used to build up the contours of the injured right side so that it would imitate the shape of the uninjured, normal left side.

Recent studies have revealed that our skeletons play a significant role in our aging faces. These studies compared the dimensions of facial skeletons on CT scans in groups of young (third decade of life) and old (sixth decade of life) individuals. The CT scans revealed a loss of definition in areas which directly correlated with changes that we see in the skin tissues of the aging face. In other words, areas of bone loss in older individuals matched their aging facial features, leading us to believe that bone deterioration is a direct cause of sagging skin and other signs of facial aging.

The CT images below are taken from one such study. They show the orbital bones of a typical young female and those of a typical older female. Note how the overall shape of the orbit has become much rounder. One can see how this underlying skeletal configuration might play a role in determining the shape of the overlying soft tissues, as demonstrated in the line diagram. The researchers further postulated that this bone regression leads to the formation of crow's feet, lower eyelid sagging and other signs of aging.

Some surgeons are using facial implants to augment the facial skeleton to restore and improve native skeletal contours. For example, implants are specifically designed to augment the bone that lies directly beneath the eye -- the infraorbital rim. As shown below, an orbital implant can restore an older skeleton to one with the shape characteristic of youth. These types of implants could also be used to repair damage to orbital bones due to trauma.

As a result of their versatility, moldability and biocompatibility, 'plastics' are an increasingly important tool for today's plastic surgeon. Coupled with the precise three-dimensional data available from CT scans, facial implants made of various plastic materials allow the plastic surgeon to better replace, reconstruct, recontour and even rejuvenate the facial skeleton.