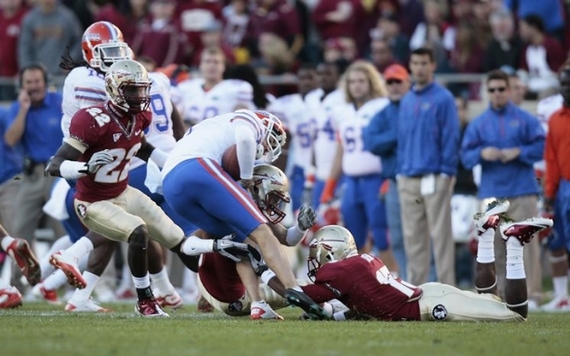 The most important play in Jimbo Fisher's career wasn't a Jameis Winston touchdown pass in the Rose Bowl, or a coast to coast Dalvin Cook run, or even an EJ Manual spin move. The play that changed everything for Fisher and his FSU program was made on a punt against an unranked team by a player who now works in an office in Chapel Hill, North Carolina.

Ochuko Jenije isn't the first name that comes to mind when you think about Florida State's dominant run over the last five years. He walked the line between starting defensive back and special teams standout on a string of underperforming teams. But if you had to pinpoint an exact moment that shifted the balance of college football power in the state of Florida, he's the point. It is his tackle on a fake punt that set up a touchdown and ensured a victory against Florida that would immediately alter football in the Sunshine State.

When the Florida Gators walked into Doak Campbell Stadium in November 2010, they did so with the most acclaimed coach in the country and six straight wins over their fiercest in-state rival. "Rivalry" might even be a stretch, the Gators had waxed the Noles for the majority of those wins and were consistently competing for National Championships. Meanwhile, FSU was having trouble saving face against the likes of Wake Forest. But there were signs of change. Jimbo Fisher was off to a fast start in his first year as head coach and Urban Meyer's offense was struggling to find their post-Tebow magic.

Ochuko Jenije sensed it as well. "Everything changed when Jimbo took over, he brought a culture of success" he remembers. He saw how Jimbo showed the team what it took to be champions. He changed their practices, he changed their diets, and even though they weren't quite ready for it yet, the senior defensive back knew the foundation of something special was being laid. "It was after we got blown out by Oklahoma that everything clicked." FSU lost 47-7 in Norman on the second week of the year, but the loss was just what the team needed. It showed how far they were from being a championship team, and got them to fully buy into Jimbo's message.

If you ask Jenije about his shining moment in the 2010 game, he'll tell you he doesn't remember too much. "It was my Senior Day and I was pretty emotional. But I remember the crowd, there was a sense of hope." There wasn't too much to be enthusiastic about for FSU fans in the late aughts, but the most realistic chance to finally beat the Gators was reason to get excited.

For a quarter and change, it was a close game. The Gators were down 10-7 when they lined up for a punt on their own side of the field. Jenije recognized the trick play immediately, shed his blocker, and made the tackle on Florida punter Chas Henry - with help from freshman safety Justin Bright, as Jenije makes sure to always add. The stadium went nuts. The next play, Christian Ponder threw a 35-yard touchdown pass to Rodney Smith and the game was firmly in FSU's hands. 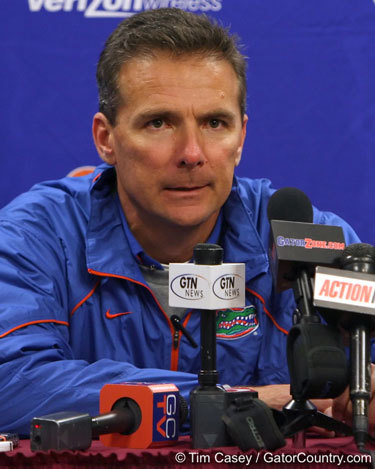 
The tackle on the fake punt was a single play among many highlights for Florida State that day, but it was emblematic of something much larger. Urban Meyer was perfect on fake punts in his career at Florida, 8 first downs out of 8 attempts. No one knew when to pull out a trick play better than him, he's the inventor of the jump pass for goodness sake. After the game, Meyer, looking like a real life Mr. Krabs meme, blamed the failed play on himself, telling reporters he was just trying to get something started. Two weeks later he quit.

Meanwhile, for the first time in half a decade, a crowd at Doak Campbell had reason to taunt Gator fans. But it wasn't just the Seminole fans who realized how significant their victory was, a good portion of FSU's targeted recruits were in the stands or watching close by. Devonta Freeman, Rashad Greene, Timmy Jernigan, Karlos Williams, James Wilder Jr were all members of that class who were at least considering Florida. Three years later they would be the core members of a National Championship team.

Consider for a moment what would have happened if Ochuko Jenije doesn't make the tackle on Florida's fake punt. The Gators seize momentum, and it takes one of FSU's touchdowns off the board, it's at least a closer game. Say the Gators squeak it out and Urban Meyer ends the regular season on a positive note. Does he still leave? Does Florida State's monster 2011 recruiting class choose to play for him instead?

Sure, this is all hypothetical, but there's no denying something switched between FSU and Florida that day, and it still hasn't switched back.

Jenije doesn't see his play in such a dramatic light. It wasn't until an interview for this story that he realized he was the first person to stop an Urban Meyer fake punt. Today he works in the football office at the University of North Carolina and roots for the Seminoles from afar. He'll make his first return to Doak Campbell Stadium this fall when the Tar Heels play in Tallahassee. There, he'll most likely be watching Florida State on the verge of contending for another playoff spot under the shadow of a third championship banner - and maybe, just maybe, it will be because of him.