Next week on July 14, the NASA spacecraft New Horizons will have completed its nine-year journey to Pluto. There is no telling what we will discover when we get there, but it will certainly be both alien and exciting!

For most of the 70 years since Clyde Tombaugh first discovered it in 1931, Pluto has been nothing more than a smudge of light even through the most powerful telescopes. For decades, we didn't even know if it was the size of Earth, or the size of a large asteroid! Even less was known about its mass, but we certainly knew a lot about its orbit!

At 39 times the distance of our Earth from the Sun, those 5.8 billion kilometers translate into a 238-year orbit. In Earth's sky, the planet moves about the diameter of the full moon every four months. When as a student I first learned about Pluto, it was in the constellation Leo, but now it is way over in Sagittarius! Its enormous distance also promised that at about 40 kelvins (-233 Celsius), it would be the coldest object in the solar system since it experiences 1/1000 the warming sunlight falling on Earth's surface. High Noon on Pluto is scarcely brighter than twilight on Earth. (Check out NASA's PlutoTime to see what this illumination looks like near you!) 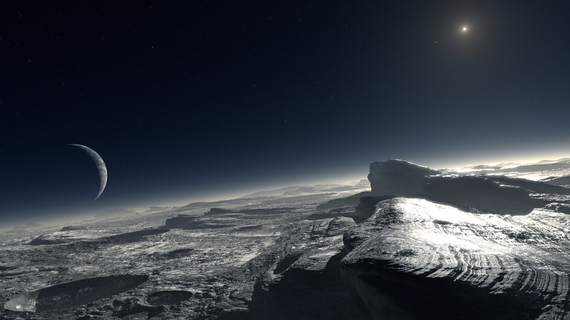 The sun from Pluto according to an artist! (Credit: ESO/L. Calçada)

It was also a huge technological feat to get anything to travel that far from Earth and still work! Electrical power could not come from solar panels as was common for space craft flying across the brilliant inner solar system. Solar panels near Pluto would have to be 900 times bigger to collect the same solar energy. So NASA went nuclear by using radioisotope thermoelectric generators (RTGs), whose decaying plutonium generated heat, and from this, a feeble but steady flow of electricity to run the spacecraft. The most important and energy-expensive spacecraft systems were the heater units that prevented electrical and mechanical systems from freezing-up.

Once the enormous satellite of Pluto was discovered in 1978 it was possible to figure out the mass of Pluto from the period and orbit distance of its moon. It was about 0.0022 times Earth and 0.18 times our moon. Its diameter after many difficult and independent measurements averaged out to be about 2,360 km. If you stood on its surface you would only weigh 7 percent of what you did on Earth: a whopping 10 pounds if you weighed 140 on your bathroom scale!

With so little mass and volume, its density works out to be only about 2,000 kg/m3, which is much less than the common granite of Earth's crust (3,300 kg/m3). Evidently Pluto is an icy body with a respectable rocky core surrounded by a thick mantle of ice.

It does have an atmosphere of nitrogen, methane and carbon dioxide, but it is very thin and it tends to freeze out onto Pluto's surface when this dwarf planet is farthest from the sun. Also the surface is not a featureless ball of ice at all. 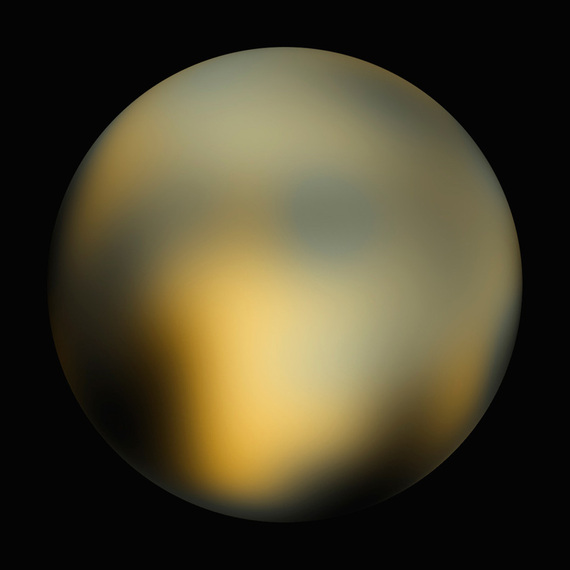 In 2003, observations by the Hubble Space Telescope were mathematically combined to create the best-possible image of Pluto from the distance of Earth. It showed a blotchy surface with light and dark features that persisted with every rotation. Some other objects show the same kinds of features such as Saturn's moon Iapetus, or even the mare on our own familiar moon.

No one really knows for certain what Pluto's blotches are. The best guess is that they have to do with the complex chemical activity of the Plutonic atmosphere interacting with its surface. The feeble ultraviolet light from our sun, combined with the delicate atmospheric temperature and density changes, causes compounds called tholins to form, which have a distinct reddish color. When tholins rain onto Pluto's surface they form a colored layer. But as darker parts of the surface absorb more sunlight heat than the lighter parts, the surface ices and condensates slowly vaporize into a mottled pattern based on the presence or absence of these colorful compounds. 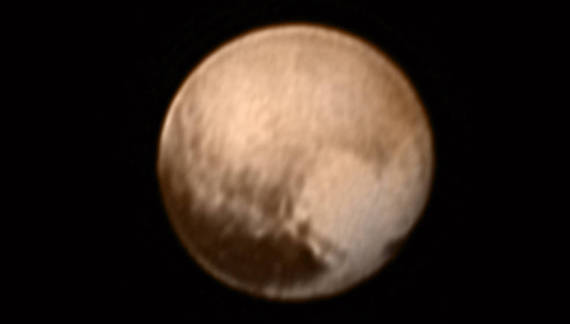 Well, at least that's one idea!

The strangest feature now coming into view is a trail of four dark, circular marks along the equator of Pluto. Dark material heats up more than light material, so these marks may never have been filled-in by the freezing-out of the atmosphere in the time since they were formed. It is interesting that, when Comet Shoemaker-Levy 9 impacted Jupiter in 1994, it broke up into 21 pieces that temporarily formed a string of dark blotches in the Jovian atmosphere. Could Pluto have been struck by a string of meteors that left behind these regularly-spaced craters? If so, they would have been enormous! The four marks are each about 400 km across, and the impacting objects would have been perhaps 70 km across. Another possibility could be ice volcanoes, but even Pluto's moon Charon does not seem to orbit close enough for gravitational stresses to heat up Pluto's interior to make 'cryovolcanoes' happen.

Pluto has one giant moon, Charon, and four smaller moons. The bizarre thing is that the orbits of these moons are very close together. They are constantly jostling each through their gravitational attractions, making their orbits very non-circular. The diagrams you have seen of their very circular orbits are far from accurate. A better gauge is shown with NASA's Eyes on the Solar System, where you can actually watch them move in their chaotic ways.

Orbits of Pluto moons on July 14, 2015 (Credit:NASA/Eyes on the Solar System)

Why do we care?

The goal of exploration is to acquire knowledge about the world around us. This lets us ask all sorts of questions and find answers to many of them. The New Horizons spacecraft cost $1 billion in round numbers, and will round-out our knowledge of the solar system by revealing Pluto in high-resolution for the first time. The goal of surveying the historical Nine Planets will have been completed. What we do with this knowledge is itself an open question, but any grade-school student can now give you a list of more questions revealed by Pluto's new imagery.

Although NASA recently got the go-ahead to build the Europa Express to visit this intriguing moon of Jupiter, there are no plans or money set aside by the US or Europe for exploring our solar system beyond the orbit of Saturn. It's too expensive compared to other planetary missions, and there is no first-ranked and compelling science that would as yet cause us to invest the $2 billion and 15 years to build, launch and collect data from such a mission. But we spend 10 times this every year on pet supplies, so cost is not a compelling argument for not doing research to enrich our children's textbooks!

But that doesn't mean we should stop exploring what we can economically reach, and at least pursue the thousands of other questions we have about our little corner of the universe. No one really knows what new mysteries await us, or what we will be able to do with the knowledge we gain. But we will be poorer as a civilization if we choose not to follow the call of our curiosity.