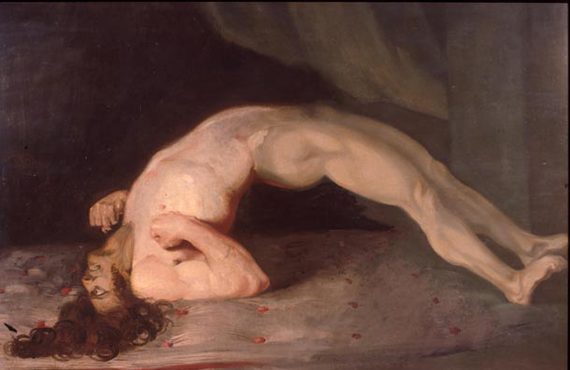 This is a poem I penned in 2012. It first appeared on YouTube in 2012. This poem seems like a rhyme written for our present inconsolable times, though this poem could have been written thousands of years ago and at any place and it would have been just as relevantly fitting.

The World Be Always Bleeding

The world be always bleeding--
It echoes through the night:
Yes: the torturing of all and every be
Our most common of grim plight.
Orphan-child of Africa's sands weeps of
Sickness plaguing across her land;
Mother of India cries-wails at all
The tragic poverty tales.
Travel far and roam wide, and be witness how
Agony doth travel all oceans' sides.
And in every place and at every eon, there
Be suffering as if all be peon.
Whilst peasants forever silently-stoically endured
His wrath, never questioning benevolent
Creator's Torquemada's path,
Alexander great and Caesar invincible never genuflected
In contrite, even as they too were disemboweled
By Suffering's relentless might.
And if to-day Her maw may seem to but gently feed and dine,
Be assured, later She will come and rage
Beyond moral creeds and crimes.

It be most loyal antagonist of our ancient past--
From Pompeii's devastation vast to a thousand
Spanish Inquisitions-Influenzas cast:
It be the Archfiend that slaughters-feasts on
Brutes and beasts till all be deceased.
Where life breathes and bathes it always slays as
It trods even upon our sacred gods.
Before Man's Iron Age of Suffering crawled ashore,
This pagan witch reigned galore, and after ye be
Dust and lore, this Satyr-whore may rule once more.
Maya's beauty be Divine, yet beyond galaxies of celestial
Light, and beneath-below the peering of wondrous
Eyes, this anguish also most cruelly vies.
For this Satanic Fire what burns and bleeds
Entire, be the pith and wherefore of
Chaos-cosmos Christless ire.

And when life leaps with love, dances with virgin joy,
When spiritual bliss be beautiful as Helen of Troy--
Still this Serpent-Monster be never faraway coy,
Always waging war to peace destroy.
Yet, rejoice and make mirth and be rapturous
In pleasures of thine earth--
And when ye be euphoric in playful make, remember
How brethren be in pitiable ache and
Never sweet life partake.
And what of the Almighty power that be? Where be
Her compassion, mercy, and love for thee?
Or, doth the She-Divinity that governs-
Reigns, be helpless-hopeless to cease
All or any of unbearable maim?
And if a sage could unriddle why all this excruciating
Torment be, then that magus would know the essence of
What be at the heart of our Universe-Sea.

But why this timeless flogging? Why war Abel and Cain?
The genesis of Buddha's philosophy? This
Devil without mercy tame?
And what of worms who decree this woe
But meaningless insect vanity?
Yes, what if this pretentious horror--this trifling
Animal fright--be without metaphysics
Of any Godful light?
Renaissance Knights proclaim how the sword of Enlightened
Reason and the pike of scientific thought
Be Grendel slayer if bravely fought.
Yet, court jesters of Newton's laws and concubines of what
Descartes saw, make much Herculean-triumphant
Gain, only to be massacred by cruel campaign
That be all but God ordained.
Himalayan Holy Monks and Shamanistic Seers of the
Wild Steppe, wisely know this cursing be mystery
Beyond learned man and awakened theology.