The role of politics in poetry is a hotly contested topic among poets and critics alike, and rightly so, since so often what passes in popular culture as political poetry is more about the tenor of the politics than the quality of the poetry. To deny politics its place in poetry is to deny the medium access to life in its fullness, as the poet is, as citizen and human, involved in politics whether they like it or not. As both a poet and American citizen, I aspire to voice my concerns more loudly than Shelley's "unacknowledged legislators of the world," specifically regarding Obama's unprecedented covert use of unmanned aerial vehicles -- or drones -- to kill thousands in Pakistan, Somalia, and Yemen.

Since 2004, in a program implemented under George W. Bush but expanded by President Obama, 2,500 to 3,500 people have been killed by drones in Pakistan alone. Though some were terrorists -- later we can discuss the indiscriminate murder of anyone labeled "terrorist," considering that since 1999 only 3,000 Americans have been killed by terrorism, and that number shrank to a mere 17 in 2011 -- up to 900 of those killed were civilians with no ties to terrorism, at least 168 were children, and a confirmed four have been American citizens who never faced charges or sat before a jury.

Poetry bestsellers move in the thousands. In the unlikely case that I could compose an entire collection of poems about drones, the even unlikelier case that that book would be worth publishing, and the absurdly unlikely case that it were to become a poetry bestseller, I could expect to sell 15 to 20 copies per week on Amazon. That means that fewer people would read my poems than have been killed by drones. I don't think I deserve a greater audience than that I've earned, but I do think that the public conversation about drones deserves a greater audience. In imagining how I might do my part as a poet to encourage that conversation, I began considering alternative methods of getting thought-provoking poems into people hands. I wanted something unexpected and symbolic, something exciting and efficient. Something like a drone. 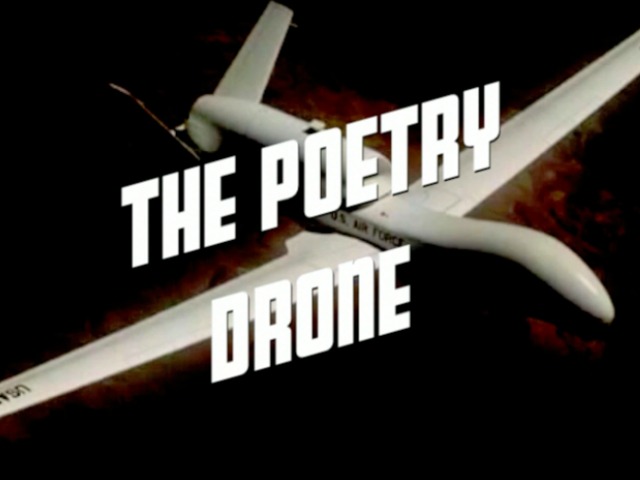 The Poetry Drone is exactly that: a drone for the deployment of specially commissioned poems by leading US and world poets, which aim to bring the US military's covert drone operations into the spotlight to promote discussion, to humanize their victims, and to explore the political responsibility of poets, artists, and citizens.

Drones have already entered the contemporary poetry dialogue, from Michael Robbin's "To the Drone Vaguely Realizing Eastward," which Yahoo refused to publish on grounds of obscenity, to the contemporary Afghan landays composed by the grieving mothers of drone victims, showcased in this month's issue of Poetry. War has occupied a prominent place in poetry since the Iliad. What differentiates the Poetry Drone is its innovative and symbolic mode of delivery, transforming swords into plowshares in a physical sense.

Now that the breeze has learnt to write

She can choose to rewrite autumn as spring

That's what I hope to do with the Poetry Drone: to teach the breeze to write. I need your help. Once we've done that, I hope that my fellow poets and you, our readers, can together decide how best to rewrite autumn as spring.