Joel Allegretti is the author of five collections of poetry, most recently The Body in Equipoise (Full Court Press, 2015), a chapbook on the theme of architecture and design. His second collection, Father Silicon (The Poet's Press, 2006), was selected by The Kansas City Star as one of 100 Noteworthy Books of 2006. He is the editor of Rabbit Ears: TV Poems (NYQ Books, 2015), the first anthology of poetry about the mass medium. 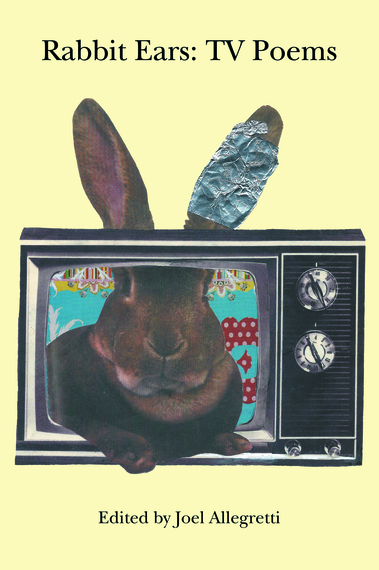 Loren Kleinman (LK): Why an anthology about TV? Can you talk about the relevance of Rabbit Ears?

Joel Allegretti (JA): Rabbit Ears: TV Poems is the first anthology of poetry about a medium that has influenced our language, tastes, politics, opinions, and lifestyles. Just as TV spans generations, so does Rabbit Ears; the contributors range in age from 21 to 91.

It's important that I discuss my frame of reference. Poets, by and large, today are educators and scholars. I'm neither. My background is in media relations. My last job was director of media relations for a national not-for-profit organization. I prepared the CEO, his senior executives, and other spokespeople for interviews. I dealt with Nightly Business Report, 60 Minutes, and producers at local TV stations around the country. I've been inside TV studios. Had I not had that experience, I probably wouldn't have conceived an anthology of TV poetry.

My professional point of view came into play as I edited Rabbit Ears. You can see it particularly in the sections dealing with TV news and television coverage of war.

LK: You've gotten dozens of accolades for the collection from both established poets like Dana Gioia and TV executives from NBC and CBS. Can you talk more about their interest in the anthology and what other feedback has been like?

JA: The fact that a former chairman of the National Endowment for the Arts (Dana Gioia), a CBS executive (Emily Christner), and a senior executive with NBC (Frank Comerford) all took the time to read the manuscript and contribute cover blurbs is a tribute not only to the concept but to the quality of the poetry.

Matthew Gilbert, the TV critic for The Boston Globe, wrote a lengthy rave review of Rabbit Ears. He said it was cleverly edited. Excuse me while I pat myself on the back.

Rob Owen, TV writer for The Pittsburgh Post-Gazette, included Rabbit Ears in a guide to holiday shopping for TV fans, along with books on Downton Abbey and Breaking Bad. I hope readers took him up on his recommendation and bought Rabbit Ears for the TV enthusiasts in their lives.

LK: What was the most challenging aspect of editing this collection with NYQ Books?

JA: There were three challenges, and they all presented themselves long before I sent Rabbit Ears to NYQ Books. The first was the absence of experience. Rabbit Ears is my first anthology. The entire process was an adventure.

The second challenge arose when I issued the first call for submissions. I didn't know what to expect. Compiling an anthology of TV poetry wasn't akin to editing an anthology of love poetry. How many TV poems were out there? Was I going to receive enough quality material for a respectable anthology? Was I going to receive any? To my pleasant surprise, I received four submissions on the first day of the call, a Wednesday. By Friday, I had received 20. I thought I'm on to something. By the end of the submission period, which lasted close to six months, I had received several hundred submissions.

The third challenge was transforming my concept into material form. I had an amorphous idea of what I wanted to produce: an anthology of poetry about television. How open-ended can you get?

I made two macro-level decisions. First, I wanted the anthology to be a celebration of television. I wasn't interested in supercilious criticism of "the boob tube"; I received a couple of poems like that and rejected them. Second, each poet would have only one poem in the anthology because I wanted the book to reflect a variety of voices and styles, much like TV itself.

I ultimately let the submissions guide me. As I accepted work, the manuscript began to build itself. Consequently, I like to think of the contributors as co-editors.

When I had made all my selections, I decided to give the anthology a TV-like structure. I divided the manuscript into 16 "channels," each a section on a genre or theme. For example, there are "channels" devoted to sitcoms ("Channel 3: Make Me Laugh"), science fiction and horror shows ("Channel 8: From Collinwood to the Fangtasia Bar"), and cop shows ("Channel 14: POLICE LINE DO NOT CROSS").

Interspersed among the "channels" are poems about commercials, each of which is introduced with the famous phrase "And now, a word from our sponsor ..."

I'm grateful that so many poets wrote new work or sent previously unpublished poems. Of the 129 poems in Rabbit Ears, 60 are exclusive to the anthology. It speaks to the contributors' enthusiasm for the project. Even the title Rabbit Ears came from a contributor, former U.S. Poet Laureate Billy Collins.

LK: What's your favorite TV show? If you were to write a poem about it, what would be the first line?

JA: I don't have one above all others.