If art is a reflection of the world around us, then America is at loggerheads. Artists Sandow Birk and Elyse Pignolet have given us their State of the Union with two smart and amusing paintings. "A Conservative Map of the World" and "A Liberal Map of the World" were exhibited to applause in Los Angeles and Chicago over the summer. A print, limited to an edition of 25, has just sold out.

"If These Walls Could Talk -- A Conversation" was one of the smartest and most amusing gallery shows in Los Angeles this year. On the Eastside, the Charlie James Gallery yukked it up with Marine, a salon on the Westside. Both venues featured different works by the same group of artists. Bright, big and fun, both shows exploded with a giddy energy.

Two artworks caught the most attention. At the Charlie James Gallery, "A Conservative Map of the World" by Sandow Birk and Elyse Pignolet had a crowd hovering and howling at their worldwide detail and observation. Their companion piece created the same reaction on the Westside. "A Liberal Map of the World" offered a completely different perspective of the same old planet.

About the two Maps, Sandow Birk reveals, "The concept was to show how the two extremes of American politics see the world differently, but then once [Elyse Pignolet and I] had the basic outlines of the countries, it was fun and funny to just go over the top and load them up with all kinds of things. The strength of them, and perhaps the sad thing too, is that while they are funny they are also pretty accurate in a lot of ways.

For example, the Conservatives see America as the most important country in the world, so its big and dead center. There are a lot of missing countries and a lot of places and people that they don't seem to care about, so that's evident in the map. And it includes things like military bases, World War II island battle sites, missile defense systems, natural resources, golf courses, Jerusalem, and Al Queda lurking in just about every corner of the map.

On the other hand, the Liberal map is equally stereotypical, with America not central, but Tibet over-sized and lots of emphasis on fishing depletion, melting ice, impoverished children around the world, the Tour de France and European cultural sites. I think they work really well together as a pair, and I think they pretty much speak for themselves."
-------------------
GORDY GRUNDY is a Los Angeles based artist and writer. His visual and literary work can be found near www.GordyGrundy.com 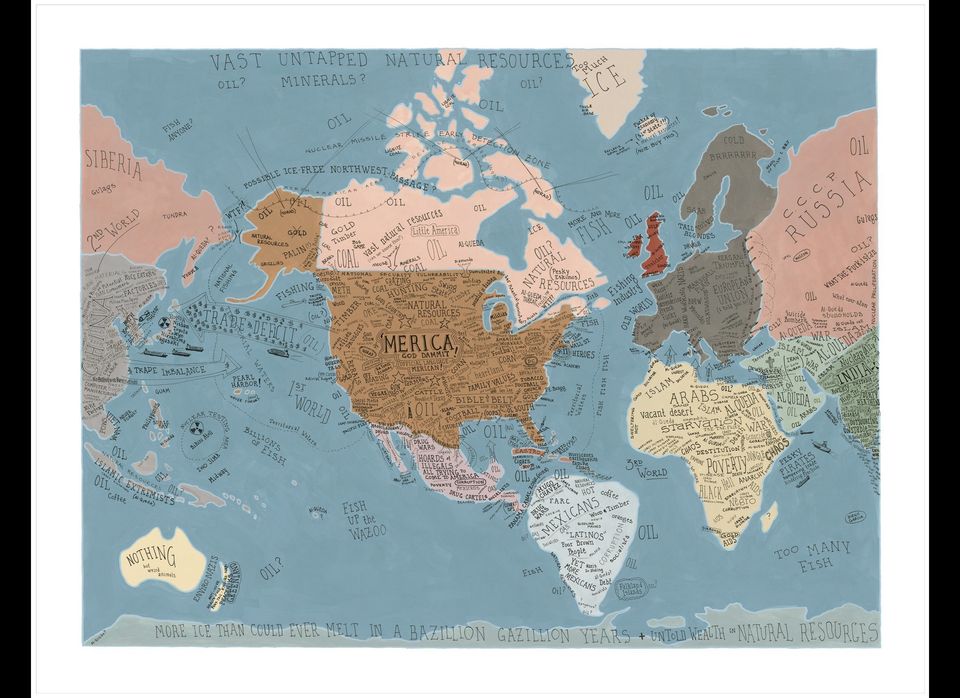