Washington is having second thoughts about its giant giveaway of military grade equipment to local police forces. But it may be too late to reverse a decade of bad policy and bad thinking.

Because too many American cops already think of citizens as "The Enemy." And its not just black citizens. All citizens. Skin color doesn't matter.

A sea change took place over the last decade that was invisible to most Americans. Across the country, in big cities and small towns, police forces gradually turned into armies. It took the events in Ferguson to blow things wide open. Only now are Senators like Claire McKaskill reckoning with the results of a misguided policy: "The whole country and every representative and senator have seen the visuals, and at some level, it made all of us uncomfortable." Note her shocking understatement and the typical D.C. focus on "optics."

The technical term for the change is "militarization," but it sounds too clinical for what's been going on. Even before 9/11, the Pentagon was lavishing cops in every state with military equipment, but that's escalated since 2006 as the Pentagon has unloaded surplus assault rifles; armored vehicles; planes and helicopters. The total dollar amount has now reached into the billions since that terror attack has made everyone think they're the next target, now matter how improbable it might seem.

Even tiny towns want armored personnel carriers. And they use them. For things like serving warrants and drug raids. That's right. For ordinary police work that used to done without military hardware.

45,000 SWAT team raids take place in this country every year. The U.S. is now a war zone and our police have morphed into soldiers. They raid at night for maximum shock and awe, break down doors, use flashbang grenades, shoot people's dogs, wreck homes, and commit violence on innocent citizens. They often raid the wrong house because their information is out of date. Sometimes they even kill unarmed citizens. And they haven't really been accountable to anyone, despite the string of news stories that have been appearing on local TV stations and in local and national newspapers for years.

I started reading about these epidemic SWAT raids about five years ago and how police forces were recruiting ex-military and radically shifting their consciousness and their perceived mission. Forget serving the public. The public is the enemy, at least potentially, and the enemy has to be crushed. As more ex-soldiers have entered the police force and more cops have been trained by the military, the danger has increased to the general public everywhere.

Nothing's going to change any time soon despite reviews. As the New York Times reports, GOP Representative Peter T. King, who's on the Intelligence and Homeland Security committees, doesn't think the money and equipment should stop flowing to local police forces. Despite the facts, despite the statistics, he insists that there's no evidence "that giving the police heavy weaponry and equipment [has] led to abuses elsewhere."

But you know this is a searing problem when organizations as different as the ACLU and The Heritage Foundation agree that America's police are out of control.

That's one reason I wrote Assault With a Deadly Lie, a novel of suspense that explores the crushing effects of police brutality on innocent people. Because nowadays, none of us are really innocent in the eyes of the law. We're all criminals, no matter who we are or where we live. As the defense lawyer in my book says, after 9/11, "You think you have rights and freedoms, but everything is contingent now." 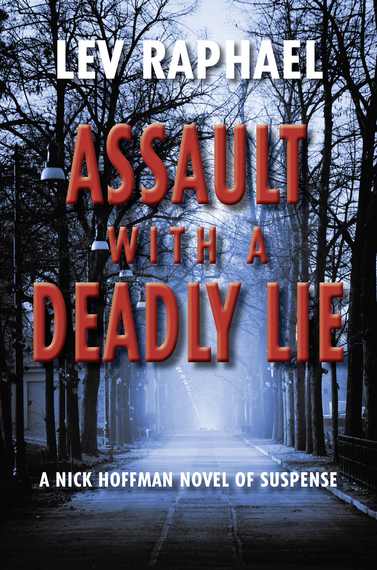 Lev Raphael is the author of twenty-five books in a dozen different genres: http://www.levraphael.com