Hey, no fair fighting back!!

That's what I hear when conservatives go on about "class warfare" in response the President's call for balance in deficit reduction. It's particularly grating to hear Rep Paul Ryan use the CW talking point, when the loins' share of his deficit savings come from cuts to low-income programs and Medicare, with no offsetting revenue.

Lots of posts in recent days have explored the tax side of this equation, essentially emphasizing the Buffett point that many of those who have done the best are paying a smaller share of the income in federal taxes than the middle class. That's an important point that links directly to President Obama's call for shared sacrifice and balanced deficit reduction. Sorry, Rep. Ryan -- it can't all come out of the spending side.

But, as the figure below reveals, the increase in income inequality -- one reliable metric of how different income classes have fared -- is very much a pretax phenomenon. The figure shows the changes in income shares from a comprehensive income data set of the Congressional Budget Office, 1979-2007, pretax and aftertax (federal taxes only -- I've added a table below with the levels for the most recent data year so you can see the underlying shares). 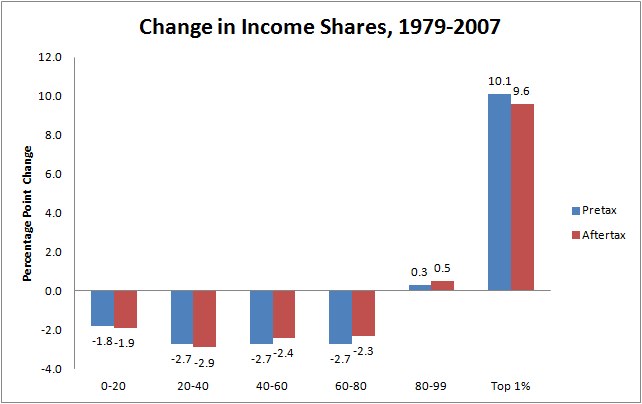 The fact that the growth in inequality is largely a function of the pretax income distribution doesn't mean we should make it worse with regressive, supply-side tax cuts -- (economist Alan Blinder calls this move "unnecessary roughness" -- amplifying pretax inequality with regressive tax cuts). To the contrary, we need balanced tax measures to generate the revenues to support programs that can help push back on this trend -- initiatives like Head Start, child nutrition, educational support.

But it also doesn't mean we can meaningfully correct the problem with tax policy alone. We have be mindful of all the policies that effect the pretax distribution--the distribution of labor and capital earnings before any taxes and transfers kick in...that's where the real inequality action is.

Now, most economists argue that much of the increase in inequality is due to factors like globalization and technological change -- factors that are less a matter of policy than of economic evolution. But of course their impact can be amplified or dampened by policy. For example, unfair trade practices like China currency management make give low-wage competitors an even stronger price advantage. (Trade agreements are less of a big deal as I see it--the advocates overdo how much they'll help and visa-versa re the opponents -- though the advocates are worse...).

Lack of a strong, long-term public-private strategy in terms of boosting our manufacturing sector, as is standard practice in advanced (Germany) and emerging (China) countries also hurts our manufacturers compete internationally. So policy does matter -- considerably -- in this space.

Technological change is also thought to be a significant factor behind the changes in the graph, though the evidence here is more ambiguous. (One strain of work, for example, argues that technology has increased labor demand for both high skill and low skill work, while leaving out the middle.) But to the extent that technology increases employers' skill demands such that a college education is increasingly necessary to compete, programs that help disadvantaged kids get that opportunity play a role here too. And cuts to those programs hurt.

And then there's a bunch of stuff that directly raises or lowers the bargaining clout of middle and working class families--policy changes or missed policy opportunities that have hurt or failed to help them.

- The long-term erosion of the minimum wage

- The inattention to labor standards such as wage and hour rules, overtime regulations, workplace safety, worker classification (this is where regular employees get misclassified as independent contractors and lose basic labor protections -- and guess what? Progressive reform of this problem is in the President's new budget plan -- very cool...)

- The attack on public sector employment

- The lack of universal health care

- The absence of comprehensive immigration reform

One more biggie: full employment. It's very much a policy variable and one, in fact, that used to be the law for the Federal Reserve -- so-called Humphrey Hawkins Act mandated full employment as a policy goal of the Fed. As I stress here, the fact that our job market has run with so much slack over the very period when inequality grew is no coincidence (and visa-versa: when inequality was flat or falling, we were more likely to be at full employment).

And of course, in recession, like now, by dithering on stimulus, we're disproportionately hurting the wage, incomes, and living standards of the folks who've been losing income share over the years shown in the figure above.

In other words, there are a lot of policy measures that have considerable impact on how the benefits of growth are distributed -- before taxes even show up on the scene. When representatives of the wealthy squeal about "class warfare," they're not just talking about shielding their treasure from the tax system. They're also protecting and endorsing a policy agenda that's helped tilt growth their way for a long time.