Paul Krugman recently highlighted the dangers of Europe's austerity policies and the growing inequality of the developed world, the worst since the Great Depression. The result then, as now, has been the growing strength of right wing parties in Europe, such as Marine Le Pen's National Front in France, and Hungary's Jobbik Party; all racist, anti-immigration parties calling for some form of independence from the European Union.

"Look at France, where Marine Le Pen, the leader of the anti-immigrant National Front, outpolls mainstream candidates of both right and left. Look at Italy, where about half of voters support radical parties like the Northern League and the Five-Star Movement. Look at Britain, where both anti-immigrant politicians and Scottish separatists are threatening the political order."

And now we have upcoming Greek elections that threaten to derail the euro as the EU's currency, or if the favored Syriza party wins, Greece will demand at the very least to renegotiate its austerity agreement with the EU. More from Krugman:

"And the devastation in Greece is awesome to behold. Some press reports I've seen seem to suggest that the country has been a malingerer, balking at the harsh measures its situation demands. In reality, it has made huge adjustments -- slashing public employment and compensation, cutting back social programs, raising taxes. If you want a sense of the scale of austerity, it would be as if the United States had introduced spending cuts and tax increases amounting to more than $1 trillion a year. Meanwhile, wages in the private sector have plunged. Yet a quarter of the Greek labor force, and half its young, remain unemployed."

These austerity policies are keeping Eurozone unemployment still in the double digits, with France's rate still above 11 percent, (whereas Germany's is 5 percent), and that is unacceptable to growing nationalist movements in particular that want to break away from the European Union.

The results are a growing income inequality that the World Economic Forum's Global Agenda Councils name the top threat to global stability in 2015. Via the Pew Research Center:

"While wealth is rapidly increasing in developing nations, and advanced economies struggle with stagnation, there is great concern about rising economic inequality in all parts of the world, particularly in Asia, according to the Global Agenda survey. The Outlook 2015 report suggests renewed focus on improved education, tax policy and job creation as ways to alleviate the problem."

It turns out that much of the nationalists' support is coming from Vladimir Putin's push to destabilize Europe for its opposition to his annexation of Crimea and parts of Southern Ukraine. But don't blame it on Putin, who is just taking advantage of European policymakers protecting their Oligarchs. Rather than spend more money to stimulate growth, as the U.S. Federal Reserve has done with its QE purchases, they want to balance their budgets and thus favor the creditors, when it is Europe's debtor nations that need relief, if they want to break out what could become a deflationary spiral. 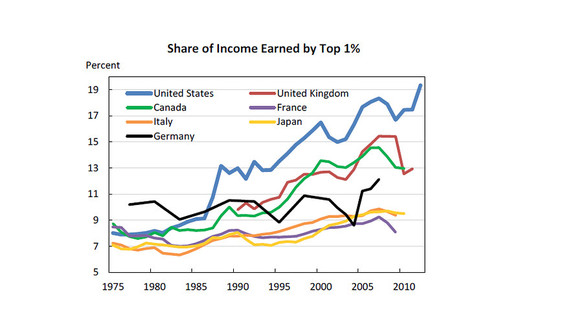 It's the old story that Thomas Piketty has retold in his Capital in the Twenty-First Century -- the tendency of profits from capital in western, free market economies to rise to the top of the wealth ladder when government policy making is weakened and financial regulations ignored, as happened during the Great Recession.

Europe is now suffering the same fate, with conservative governments in control and the debtor nations such as Greece still being punished, while Germany flourishes as it protects its own interests rather than that of the EU as a whole.