Scientists, more than most other groups, tend to be coy about their political leanings. But as usual, the best way to unearth the truth is to follow the money. If someone has donated cash to a candidate or political committee, you can find their donation on the Federal Election Commission database -- a nice tool of transparency that doubles as an impressively deep rabbit hole of political trivia. (Did you know Kanye West gave $2,700 to Hillary?)

On the surface, the results aren't shocking -- a 2009 Pew Research poll found that 55 percent of American scientists are Democrats; their campaign donations tend to lean that way, too. But donated money also reveals more intriguing personal information -- alliances looking to be made or upheld, a bet on who best represents your beliefs -- that the nation's STEM leaders usually don't air publicly.

Here are the politicians and Super PACs that have been vouched for by some of the most famous scientific minds of America.

Bill Nye has recently become visible in the world of politics, partnering with none other than President Obama to speak out against climate-change deniers in Congress. "I have no trouble taking these political stances, because I think the evidence is overwhelming," Nye told The Seattle Times. "Conservatives are so far to one side that things are a little out of balance."

But Nye was quietly involved with the Democratic Party as early as 2000. When his job listing was still "Science Guy" (seriously), he made a small donation to Tom Campbell's run for Senate, followed by a $1,000 donation to Democratic Senator Maria Cantwell of Washington. In 2010, as the newly selected CEO of the Planetary Society, Nye made donations to Senator Barbara Boxer, a California Democrat. He began to give financial support to Barack Obama in 2012, donating $500 to Obama for America and $500 to the Obama Victory Fund.

Venter was the first to decode the genome of a free-living organism and created the first synthetic lifeforms. He is the founder and CEO of the J. Craig Venter Institute, a merger of several organizations including the Institute for Genomic Research and the Institute for Biological Energy Alternatives.

Venter has also actively donated to politics since the early 2000s. While he has donated to a variety Democratic candidates, his top pick seems to be current Democratic potential Hillary Clinton. In 2006, Venter made a donation to campaign committee Friends of Hillary and then a series of donations toward her 2008 presidential run. While he gave to President Obama's campaign once she lost the nomination, Venter has lent support to Hillary once again in 2015: In July, he donated $2,700 to Hillary for America. 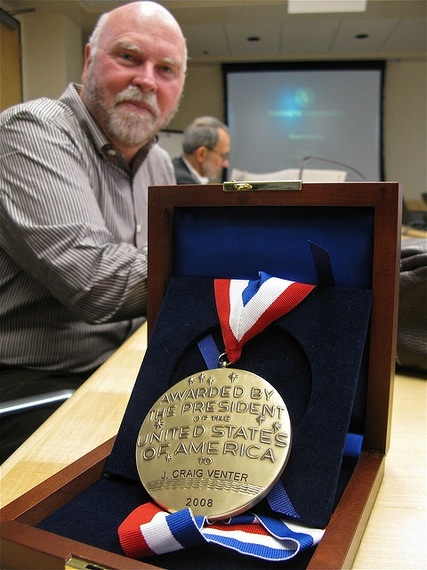 Craig Venter with his National Medal of Science.

Venter, however isn't entirely sold on her -- this July he also gave $1,000 to the Martin O'Malley campaign. Which, when you look at O'Malley's politics, makes sense: He's celebrated by the biotechnology industry for supporting Maryland biotech tax credits.

There's also a personal connection here that can't be ignored. In 2007, O'Malley chose Thomas Watkins, then the CEO of the biopharmaceutical corporation Human Genome Sciences, to chair Maryland's Life Science Advisory Board. It was backing from Human Genome Sciences that allowed Venter to establish his Institute for Genomic Research.

From the look of it, Tyson isn't a frequenter campaign financier -- there's only one donation on record, to Connecticut Democrat Elizabeth Esty. She was elected to Congress in 2012 and reelected in 2014. Her initiatives (and perhaps the causes closest to Tyson, if donations mean anything) are creating green jobs, protecting access to reproductive services, expanding STEM education, and advocating for gun reforms.

Watson is a tricky character: He's famous for receiving the Nobel Prize in Physiology for co-discovering the structure of DNA. He's also infamous for saying some racist, sexist, and homophobic things -- abhorrent enough that the Cold Spring Harbor Laboratory stripped him of his title as chancellor of the institution in 2007. 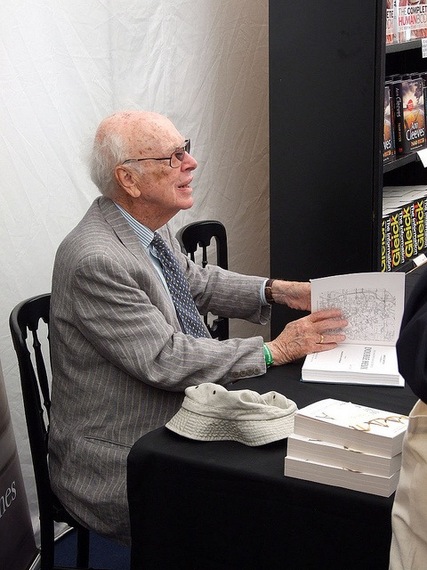 Apparently Watson still files his political donations with Cold Spring Harbor as his employer. From 2003 until her retirement in 2013, Watson supported Democratic Congresswoman Carolyn McCarthy, a long time gun-regulation advocate. It's likely that Watson saw himself on the same side of a good fight with McCarthy -- in 2004 she was able to obtain government appropriations to launch Cold Spring Harbor's Center for Women's Genomics and the DNA Biopsy Project, both of which provided research for breast and ovarian cancer.

But Watson's finances didn't go to just Democrats -- in 2012 he also made a $1,000 donation to the New York Federal Campaign Committee.

Witten has been called a string theory visionary and "Einstein's true successor." In 1995, he revealed that the five competing string theory variations could actually all belong under the same umbrella. Naturally, he went on to win a MacArthur "Genius Grant" and the Fields Medal.

Witten also supports a myriad of Democratic politicians, regardless of their district, including those competing in congressional races in Tennessee, Wisconsin, and California. Additionally, Witten is a steady contributor to the PAC of J Street -- a self-described "political home for pro-Israel, pro-peace Americans." The purpose of the nonprofit is to advocate for a diplomatic, two-state solution for the Israeli-Palestinian conflict.

Young billionaire Elizabeth Holmes is the founder of Theranos, a hardware and medical company credited with developing new types of blood tests capable of detecting hundreds of conditions with just a prick to the finger (and which is currently mired in speculation over its future). Holmes has also been named an inventor on more than 164 patents, and she's the only 31-year-old to sit on the Harvard Medical School Board of Fellows.

But while her fortune is large, Holmes' political fundraising so far has been small -- and close to home. She donated up to $15,200 to the unsuccessful Senate campaign of Democrat Michelle Nunn, now the CEO of CARE USA. Nunn is the daughter of former Georgia Senator Sam Nunn, who is on the board of Theranos.

5yrs ago on @space_station I got awful news from Earth. Recognizing the victims & my sis-in-law @GabbyGiffords todayhttps://t.co/O2TtQJDLY9

It seems like astronaut Scott Kelly, now famous for holding the American record for longest consecutive days in space, has made a campaign donation only once. In 2010, Kelly donated to the congressional campaign of his Democrat sister-in-law, Gabrielle Giffords who, in 2011, became the victim of an assassination attempt. Before she retired in 2012, Giffords spent her time in office advocating for health care reform, border trafficking, and small business tax reliefs.