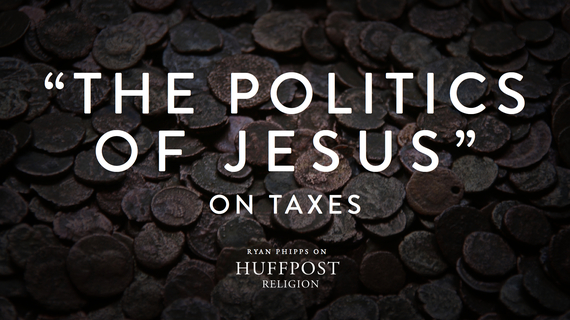 - The story of Jesus turning water in to wine during the wedding at Cana is only mentioned in the Gospel Of John.

- The Annunciation is only mentioned in Matthew and Luke.

- The healing of the blind man at Bethsaida is only found in Mark.

What's my point? Assuming that The Gospels were written down from memory by the writers or transcribed by another as the stories were dictated, it's safe to assume that when something repeats, it was impactful enough to "stick" in the writer's memory.

If you are not an oral traditionalist, I concede that this reasoning will come off as deeply flawed to you.

This is, however a blog entry, not a chapter in a book, so we'll leave Markan Priority and The Q Document for another time.

Anyway this idea of "mirroring" is what brings us to the topic of taxes and what Jesus had to say about them.

Later the leaders sent some Pharisees and supporters of Herod to trap Jesus into saying something for which he could be arrested. "Teacher," they said, "we know how honest you are. You are impartial and don't play favorites. You teach the way of God truthfully. Now tell us--is it right to pay taxes to Caesar or not? Should we pay them, or shouldn't we?"

Jesus saw through their hypocrisy and said, "Why are you trying to trap me? Show me a Roman coin, and I'll tell you." When they handed it to him, he asked, "Whose picture and title are stamped on it?"

His reply completely amazed them.

And in each of these accounts, Jesus explicitly says that he approves of the paying of one's taxes.

Tax collectors in ancient Israel worked for the Roman Empire. Many tax collectors were Jews who bought tax collection franchises from the Roman government, and any amount that they collected over and above what Rome required, they could keep for themselves.

In this way many of the Jewish tax collectors became wealthy at the expense of their own people.

In Luke's Gospel, when some tax collectors came to John The Baptist to be baptized, they asked him what they should do to show their repentance, and he answered,

"Collect only the amount of taxes that the government requires." (Luke 3:13)

This, coupled with the words of Jesus above, shows us that Jesus is not just making a blanket statement when he says "give to Caesar what belongs to Caesar" and allow oneself to be extorted. But he is saying to pay what is required.

In 1866, a Presbyterian Pastor named Joseph Alden wrote a book titled Christian Ethics, or the Science of Duty in which he says the following:

"A man's taxes are what he pays for the protection of his life and property, and for the conditions of public prosperity in which he shares. He ought to pay his just portion of the expense of government."

"Taxes are the price we pay for a civilized society."

So what would Jesus' stance be on taxes were he alive today?

Based on the Gospel accounts and other references above, he'd be for taxes. At what percentage, you ask? Well, that's hard to glean from the text, but being Jesus, with his chief motivation being to love God and to love others, (Matthew 22:36-40) would support a percentage that provided for the well-being of all people.

To say that Jesus would be "anti-tax" is just not true, according to his own words.

If a Christian is, by definition "one who follows the teachings of Jesus Christ," and the life of Jesus supported taxation, then maybe an anti-tax stance is not Christian.

Could we be robbing the poor by supporting such a position?

Could we be withholding help from those who are truly unable to help themselves?

Could we be making our country a place that only "works" for ourselves as individuals and completely overlooking the inherent needs and rights of our fellow man?

These are some questions worth asking.