Shame. It governs our lives in more ways than we'd want it to. Any cringe, embarrassment, infraction of social norms; It is a learnt mechanism to pull us back into a narrative that we have been told our whole lives.

When you feel shame, you always know why. Whether it has been projected, disguised or transferred, it is always deeply felt.

Shame is about enforcing the rules we don't have written. Female body hair, male impotence, helpless dependence, obesity, age. Think of all the things we work hard to pretend aren't there, to cover up or to dismiss in others. Hiding an addiction, shaving, makeup, bravado.

But as such a blunt and ungoverned tool, it's all too honest in a way that supercedes political correctness. There is a spilling over of shame onto those who have suffered, victims who are victims out of nothing other than enormously bad luck. There is also a distancing we often give to people whose shame we do not want to tarnish ourselves.

The blinding shame provoked by bodies, gender, sex and sexuality probably contributes to their conflation with one another. As Dan Savage describes coming out to his mother; "I told her I was gay and she heard 'Mom, I suck cock.'"

So because of what makes queer communities distinct, shame is something queer people have to confront on a constant basis, which is where pride comes in. Pride is the blossoming of shame into something one can own. It is wearing oneself openly enough that the shame cannot stick.

I don't just mean the fun kind of pride, like marching in a parade. This is every day. I'm talking about getting gender specific about partners when the internet company calls, it is telling your grandparents what you are really doing on the weekend and with who, it is writing that article when you know the trolls will circle. This kind of pride is about not self-censoring for the sake of everyone else.

It is about taking the shame people expect you to feel and knocking it out the park.

Because shame is such a pervasive mechanism to pull us into conformity, it is an assumed reaction. People are shocked at those who don't let it control them. When superstar genderqueer models are asked whether they really don't care if we think they're a man or a woman, they're actually being asked "Do you really feel no shame?"

The discarding of shame can almost be more taboo than an act itself; The "I don't mind if they're gay, but do they have to flaunt it?" mentality. This is because shame is not about what we've done, it is about who we are.

It is also easy to say, "Drop your shame, embrace your pride, it will set you free." But the reality of life in most of the world is that remembering your shame is about survival. The pride in being different is so confronting to some people that their desire to quash it is incredibly destructive.

The transgender teenager who was assaulted in a bathroom and had "it" carved onto his chest. The numerous assaults on queers that occur everywhere. The conflation of transgender "passing" with beauty. The horrendous statistics for self harm.

These are the hard truths for the queer community, but the saddest truth is often that the greatest shame comes from those closest to them. The rejection by families and loss or erosion of the support network one is born with is a loss of one's allies in life. The reconstruction of an identity is too often a lonely process.

Pride can be about visibility and visibility can normalize. The more people who live with pride, the weaker the ignorant voice becomes.

So if the shame one has can be replaced by pride, embrace it. Take it with two hands. Because when it comes to shame and pride, it is really about a choice between conforming oneself to live with the world and asking the world to live with you. 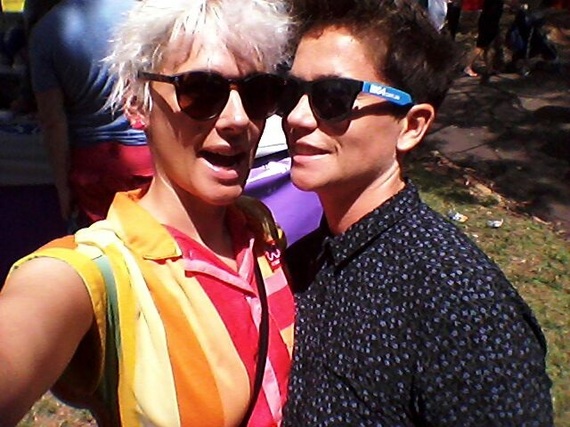