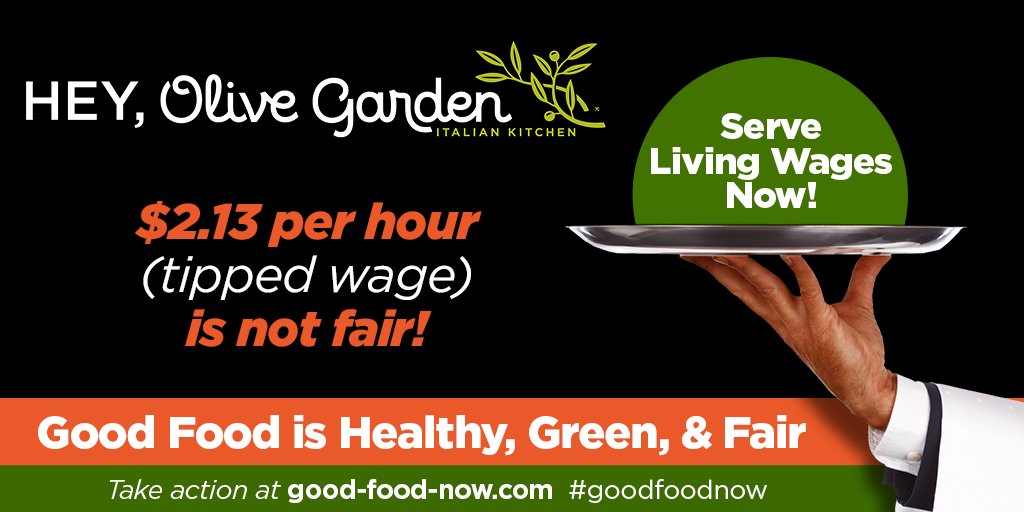 The continued success of our nation's restaurant industry -- it's the fastest growing sector of our economy, FYI -- speaks clearly to what we all probably know already; America loves food. It's not uncommon for the average person to have a laundry list of favorite restaurants, or a meticulous and discerning palate. Sadly, such sentiments often dwarf the average individual's knowledge or understanding of where their food is actually coming from, or how the workers preparing and serving that food are treated.

Large corporate restaurant lobbies exploit this lack of knowledge and play an oversized role in shaping what people consume, all the while spending millions on politics that enhance their bottom line but have a detrimental effect on workers' livelihoods and customer health. Darden Restaurants, owner of multiple restaurant chains including Olive Garden and Longhorn Steakhouse, is a leading corporate lobbying powerhouse in its industry. Darden has played a prominent role in opposition to minimum wage increases and earned sick leave policies, and in supporting politics that impact food sustainability and customer health.

Between 2011 and 2015, Darden Restaurants spent $5.3 million trying to influence Congress on issues critical to public health and workers' rights. As an active member of the National Restaurant Association -- or "the other NRA," as we like to call them -- Darden has stood against paid sick leave legislation in over 15 states. Their employees suffer from the company's lobbying, but so do their customers, who oftentimes don't realize they're being served food by workers without access to paid sick days. The CDC has found that infected food workers account for the vast majority (70%) of norovirus outbreaks.

Darden's crown jewel, The Olive Garden, knows a thing or two about this; they made headlines in 2006 and 2011 for illness outbreaks involving hundreds of their staff and customers. Without an earned sick leave policy, their workers are forced to choose between their health and their income. To make matters worse, Darden has consistently supported the NRA while its opposed efforts by Health Departments and City Councils to inform and protect consumers through common sense public health policies, including initiatives such as menu transparency and taxes on sugary drinks.

While Darden's political choices make it harder for all consumers to make informed dining decisions, many of their workers face the additional barrier of poverty wages that limit their choices when it comes to planning their family's meals. Darden is the largest direct employer of tipped workers in the world, with 20% of its 150,000 workers receiving the federal subminimum wage of $2.13 per hour. It isn't surprising, then, that Darden is a staunch supporter of the antiquated and unfair subminimum wage for tipped workers.

While workers in Darden's restaurants struggle to make ends meet, the workers who produce the food that ends up on our plates are struggling for their human rights. One major Darden supplier, Tyson, has recently received attention for undermining workers' compensation laws across the United States, and subjecting its workers to deplorable conditions, such as consistent ammonia exposure in chicken processing plants.

Another, a seafood supplier, was recently linked by the Associated Press with slave labor in Thailand. Such conditions emanate in large part from a "just in time" logistics business model, borrowed from Walmart. In this model the retailer -- not the producer or the distributor -- sets the price-point and takes delivery of products only when needed, allowing for reduced labor and inventory costs. As a result, producers often cut corners to meet the prices Darden is willing to pay. In the context of labor, this means lower wages, no benefits and in some cases, law-skirting or outright illegality.

Darden's political activities serve their bottom line, at the expense of both workers and customers. And as the largest full-service restaurant company in the world, they wield unmatched influence across the industry. Our organizations have come together with 49 others to hold them accountable to our communities. Stand with us and learn how you can take action at Good-Food-Now.com. It is about time Darden change course, and commit to serving Good Food Now from seed to plate.

Saru Jayaraman is Co-Founder and Co-Director of the Restaurant Opportunities Centers United (ROC United) and Director of the Food Labor Research Center at University of California, Berkeley.

Jose Oliva is Co-Director of the Food Chain Workers Alliance.

Co-Founder and Co-Director of the Restaurant Opportunities Centers United (ROC United) and Director of the Food Labor Research Center at University of California, Berkeley.