As a longtime LGBT activist with experience in dealing with the Catholic Church, primarily related to the child abuse scandal here in the U.S., I have watched closely as the new pope brings hope in many Catholics, myself included, with his initial messages of "Who am I to judge" related to LGB people (he has made comments about trans people that are much more hostile hence the exclusion of the T).

His recent trip to the U.S was something I looked forward to, to the point of accepting an invitation to the White House for his arrival ceremony, which I attended with my partner and my 87-year-old devoutly Catholic aunt. And overall it went well, until Kim Davis (and her legal "counsel") decided to drag her lies and disingenuousness into the debate.

At the trip began I was hopeful, despite the World Conference on Families rejecting LGBT participation or content. I knew many LGBT Catholics and allies who organized and spoke out prior to and during the historic trip.

I was heartened by the media including issues related to the LGBT community as they intersect with Catholicism, especially journalists like Maria Shriver who regularly brought up the "who am I to judge" comments and expressing hope they would result in some more discussion of our communities in the church.

Thomas Roberts put together a very nuanced and thoughtful panel interview that was aired in several segments on MSNBC about Catholics marginalized by the church, including LGBT people. As you can see from the photo I was a participant in this vibrant, diverse discussion. 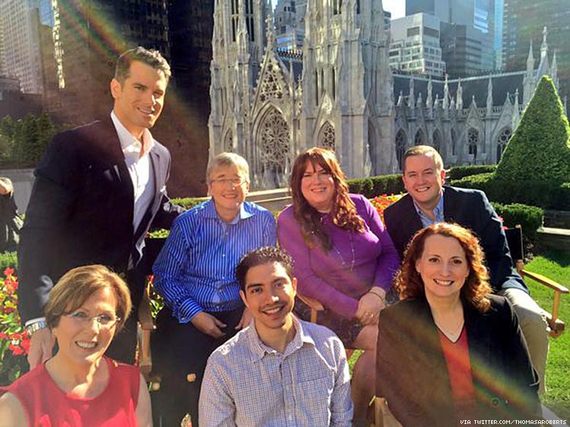 And while some general references toward the end of the trip by the Pope to "traditional families" and "marriage tradition" (that serve as code that makes most LGBT people uncomfortable) I was, as a progressive who knows full well that change in the Catholic Church is a glacial process, pretty pleased with how it all went.

For example, out gay Catholic Mo Rocca participated in the mass in New York City. Dignity, GLAAD, the Family Acceptance Project, Fortunate Families and others spoke out and gathered in Philadelphia to discuss and organize.

Enter Kim Davis and her lies.

She may not be Catholic but I think the 9th Commandment is pretty universal. Kind of like the Golden Rule the Pope invoked when speaking to the U.S. Congress.

The firestorm began when David and her lawyers from the Liberty Council went all over the national media talking about a "private meeting" with the Pope, his blessing her and telling her to "stay strong," and insinuating that he expressed support for her refusal to do her job.

The Vatican, to its own detriment, dragged its heels and gave non-committal responses to journalists as Davis and her team continued to wring out every bit of attention they could -- without producing any evidence of a "meeting" -- with any media outlet that expressed interest. Not enough media were responsible to note that just last week another fraud was perpetrated by Davis and her team about a rally that included grossly exaggerated information.

Finally, official reaction is coming late and only under tremendous pressure, and has made this into a public relations as well as religion and political story. Headlines now scream "Vatican Source: Pope Blindsided By Meeting With Controversial Kentucky Clerk."

Ahem. One would think the Vatican would have a better communications team, but as I remember vividly from the abuse scandals, I am not that surprised. A tin ear to how the media -- and the community -- in the U. S. can mobilize is something I am familiar with.

So this is their dilemma now. The Vatican allowed Kim Davis to dominate the message and prompt reaction from LGBT Catholics groups that no longer jibes with what they are saying really happened.

So it turns out that Davis, like so many others during this trip, was able to shake the Pope's had, be blessed and exchange a few words, which I am sure he said to others. Private meeting? Encouraging her for her conviction? I doubt he even knew who she was, frankly, and the whole think stinks of making a mountain of good PR out of a molehill of an interaction.

Father Federico Lombardi, SJ, the head of the Holy See Press Office released a statement, which said in part:

Pope Francis met with several dozen persons who had been invited by the Nunciature to greet him as he prepared to leave Washington for New York City. Such brief greetings occur on all papal visits and are due to the Pope's characteristic kindness and availability. The only real audience granted by the Pope at the Nunciature was with one of his former students and his family.

The Pope did not enter into the details of the situation of Mrs. Davis and his meeting with her should not be considered a form of support of her position in all of its particular and complex aspects.

Uh-huh. So while he expressed support of conscientious objection being an important right for all there are still more questions than answers.

In addition, the Pope's reported denial of a meeting with the Dalai Lama is also bad optics, if that turns out to be true as well.

I'll pray for some clarification in the meantime. And may Kim Davis and Liberty Counsel be duly judged for their disingenuous and dishonest behavior. I'll call is un-Christ-like and leave it at that.

Who am I to judge?