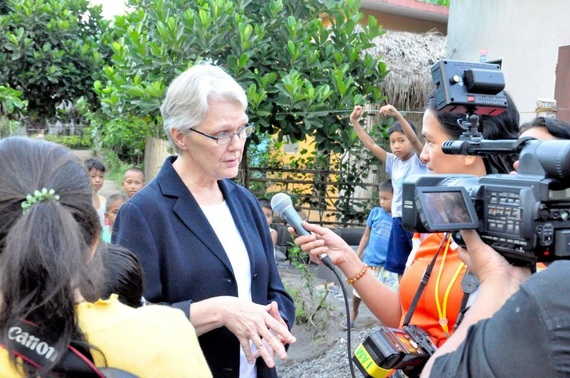 When the pope sits down on Saturday in Tacloban City to have lunch with those who lost loved ones, jobs and homes in Typhoon Haiyan, he will be doing much more than demonstrating his love for the poor.

The pope's time in the Philippines, one of the world's most disaster-prone countries, will encourage us all to reflect on how we can seize the opportunity to make 2015 the year of resilience by reaching historic agreements on new measures to reduce the impact of disasters, climate change and to adopt a new set of sustainable development goals.

Typhoon Haiyan was an object lesson in how poverty and disasters are intertwined. The strongest storm ever to make landfall affected the poorest of the poor most.

In 2013, tropical cyclones were responsible for 92 percent of the people affected by meteorological disasters in Asia, including 16 million or about 3.5 million families as a result of Typhoon Haiyan. Another 20 million people had their lives disrupted in the Philippines that year by earthquakes, volcanic eruptions, floods and smaller storms.

Typhoon Haiyan claimed over 6,000 lives on November 8, 2013, when it made landfall six times as it crossed the Philippines archipelago, destroying more than 1 million homes, and affecting 14 million people, leaving many homeless, injured and children orphaned. It cost the country $12 billion in economic losses.

Haiyan fed slowly on the warming waters of the Pacific Ocean before it arrived, creating a seven metre tidal surge. Its strength was consistent with the observed effects of climate change. Combined land and sea temperatures have risen by 0.85˚C over the last 100 years and there has been a 19 centimeter rise in sea levels.

Tacloban was the storm's epicenter. It destroyed schools, health facilities, housing, places of work, the airport and other critical infrastructure spread out along the exposed coastline. The location of housing and key infrastructure exposed them to the full impact of the storm and vulnerability was increased by the poor quality of construction. The city also experienced typhoons in 1897 and 1912 that killed some 22,000 people.

The reasons why so many people died in an age of advanced weather forecasting varied. Many poor communities refused to leave their shanties because they were afraid they would not be allowed to return. Some did not understand what a tidal surge was. Some did not believe the warnings because there was no obvious change in the weather prior to the storm's arrival. Others did not move to evacuation centres because they felt safer in their homes.

It is vital that future investments on social development, along with new infrastructure should improve people's resilience and avoid the creation of new risk in line with the priorities of the Hyogo Framework for Action, the global blueprint for disaster risk reduction adopted by all UN Member States in 2005 after the Indian Ocean tsunami took over 227,000 lives.

The pope's visit to the Philippines and his solidarity with the poor of Tacloban should speak volumes to world leaders and government ministers tasked with adopting a series of new global agreements this year which will form the basis for tackling poverty over the next 15 to 20 years.

In March, the Third UN World Conference on Disaster Risk Reduction, hosted by Japan, will update the Hyogo Framework for Action based on the experience of the last 10 years including Typhoon Haiyan, with the overall objective of reducing mortality and economic losses.

Among other things, this will require a strong focus on better standards of housing for the poor and a huge effort to protect, or move, millions of people out of danger zones along storm and flood exposed coasts, river banks, unstable hillsides and seismic zones. Organization and understanding of what drives risk are essential to building resilience.

Existing levels of exposure and vulnerability lie behind losses. A new universally accepted agreement on climate change will help to avoid the creation of new risk. And a comprehensive new set of sustainable development goals will provide the world with the necessary guidance for improving the lot of humanity.

The pope's first visit to the Philippines is a truly historic event and an occasion of joy for the country's Catholic population. His visit to Tacloban reminds us what is at stake if we do not capitalize on the promise of 2015 to make the world a better and more resilient place.

_________________ Margareta Wahlström is currently the Head of the United Nations Office for Disaster Risk Reduction (UNISDR) and was the UN Special Coordinator for Humanitarian Assistance to the Tsunami-Affected Countries (2004-2005).