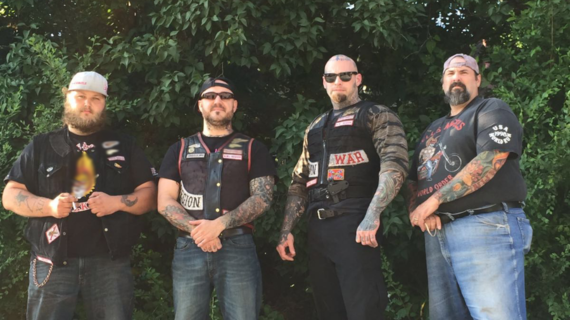 The First Amendment guarantees citizens the Freedom to Assemble. Unless you're in Porter County, Indiana. And a Hells Angel.

Just when it seemed Motorcycle Club profiling couldn't get any worse: On May 11, 2016, while hosting a charity event for kids, patched members were targeted and harassed by over 60 local and state law enforcement officers.

The Background: In late April, the Hells Angels NWI Region circulated flyers, advertising Bike Night at The Mill-- a bar located in Burns Harbor. Proceeds were to benefit a special needs school--an educational facility which includes students with autism.

Those flyers caught the eye of the Porter County Sheriff's Department. And because they valued a show of force, more than helping struggling children, they decided to put an end to the fundraiser.

So, on the evening of the event--after rallying officers from numerous local and state agencies--they activated a large scale "Saturation Patrol."

Just as the Hells Angels rode up to the bar, authorities swarmed the parking lot, blocking both the street and access to the gathering. Once the general public saw the enormous presence of law enforcement, many pulled out--substantially lowering the charitable outcome.

And all this occurred on the taxpayer's dime. So, how did authorities justify the costly drama? Law enforcement claimed Hells Angels were observed traveling two miles over the speed limit and failing to use a turn signal.

Shortly afterward, the Sheriff's Department issued an unabashed statement, making it clear they intended to continue such tactics at future Club events.

And if that wasn't enough, in classic bully style, officers intimidated The Mill owner with threats of Excise (Fines for any infraction they could dream up), if she refused to cancel upcoming gatherings with the Hells Angels.

Not allowing the harassment to stand in the way of freedom, and their determination to serve charities, the Charter made arrangements for their next 3 fundraisers to be moved to an alternate bar. This time, proceeds were directed toward a No kill Animal Shelter.

However, as soon as the Club's flyer went public, depicting the substitute location, law enforcement took note. Keeping their vow, they set out to strong-arm the newest bar owner.

Afraid of losing her business, for illusive infractions, she sent a frantic text. In part, that message read:

"I'm sorry I have to tell you this, but Excise got ahold of me and they already have things to shut me down, without even walking into my bar. I have been informed that if I allow you to 'take over' my bike night for any of the 3 nights you advertised, I will not be able to afford my mortgage...."

It's crucial to note, the authorities had never been inside her establishment. Yet, they made it evident, they'd cite enough imaginary violations to destroy her business, if she didn't play ball.

Let me be clear: I'm not implying fault with either bar owner. Those proprietors should never be compelled to put their livelihood on the line to affirm a political stance. Undoubtedly, they, like the club, have been unfairly pursued.

As for my perspective? I'm not a party girl. Never have been. (The biggest crowds I interact with are at the mall and church). In fact, I've managed to go my entire life without setting foot in a bar. Until, that is... just a couple months ago, when I found myself somewhere I never before imagined.

In a biker bar. With Hells Angels. On Easter Sunday.

Appreciative of the invitation, I showed up at a Phoenix tavern about an hour into the festivities, made my way through the crowd, gave the organizers' a hug and whispered in their ears: "I'm not really comfortable. I just wanted to come by, say hello to friends, and stay a few minutes. I hope you're not offended when I leave early."

In response, I was graciously seated at their table, and told they understood my fish-out-of-water dilemma. A couple hours, and several hugs, later, I made my way out the door.

That particular event was a fundraiser for disadvantaged children. And while the language in the bar was...well, let's just say colorful, I have to admit: I've rarely seen such unity, and desire to help others, than I observed between the Club members that afternoon.

In retrospect: I can't think of a more sacred way to spend Easter Sunday.

While police profiling is not exclusive to biker communities, it's a growing occurrence within the culture. And lately, authorities have become so brazen, they no longer attempt to hide their intentions.

Sure, law enforcement knows it's wrong. Of course, they know it's unethical. But with an "ends justifies the means" mentality, and confidence the general public will turn a blind eye, they find loopholes to do it anyway.

And how does it happen? For the most part, citizens won't defend factions outside their comfort zone, especially if those individuals have, first, been vilified. In a distinctive divide and conquer strategy: authorities can illuminate fringe groups, depict them as gangsters, strip them of their rights, and count on the public's uncanny ability to shrug their shoulders and retreat into the shadows.

Yet, the tragic reality is: when any American loses freedom, we all lose freedom.

If Middle America is too complacent to stand in solidarity with Hells Angels, or charities, under fire--will they, at least, be compelled to stand for Justice? For the U.S. Constitution? For Freedom?

*Bio: Candy Chand is a writer living in Cave Creek, AZ. She's been interviewed on Fox & Friends, NPR and PBS. Follow, and message, her on Facebook by clicking on this link @ Candy Chand---Writer