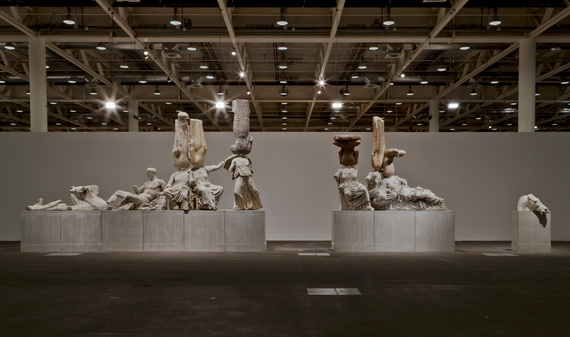 Shanghai-based artist Xu Zhen is interested in the theme of aesthetic collisions across time and culture. With the help of recent advances in the fabrication of sculptural forms, he has been realizing his ideas in monumental installations that quote and re-constitute ancient sculptures. For example, Xu Zhen's Eternity, which made its debut at Art Basel, 2014, consisted of fabricated replicas of the heroic classical statuary that once decorated the east pediment of the Parthenon. Several of these classical reproductions serve as bases for -- or more precisely, impale--inverted replicas of ancient Buddha statues. The detail and fidelity of these copies would have been nearly impossible to achieve: the labor and expense required would have been extraordinary.

The entire field of sculpture--and its range of possibilities -- is undergoing an expansion and transformation. Digital technology, including 3-D scanning and CNC (computer numerical control) milling are facilitating and industrializing the creation of objects of extraordinary subtlety and complexity. "The use of 3-D modeling techniques changes the production time and the accuracy of the objects being produced," Xu Zhen explains, "but more importantly it also enables realizations of the imagination to a greater degree."

Mark Rossi, whose firm Handmade often works with sculptor Charles Ray, also has positive things to say about these developments: "3-D modeling enables the creation of objects (both virtual and subsequently physical) that cannot be created by other methods. It enables exploration and iteration more rapidly in some cases than model/pattern making can, and at potentially much lower cost. Also, shifts in scale can be accommodated immediately."

Xu Zhen, a conceptualist who describes himself as both an artist and curator, has the production of his works overseen by the MadeIn Company, which he founded and owns. According to Alexia Deheane of MadeIn, the process of making the final forms for Eternity began with 3-D scanning:

"First, we got permission to make scans of the original Parthenon sculptures. Their forms were initially scanned, worked on in 3-D software for more accurate detailing, and then printed in parts afterwards. Using the printed parts, we went back to traditional molding and casting, working with glass fiber reinforced concrete, sandstone, limestone, marble grains and mineral pigments. We worked with a team from Switzerland's Kunstgiesserei during the entire process." 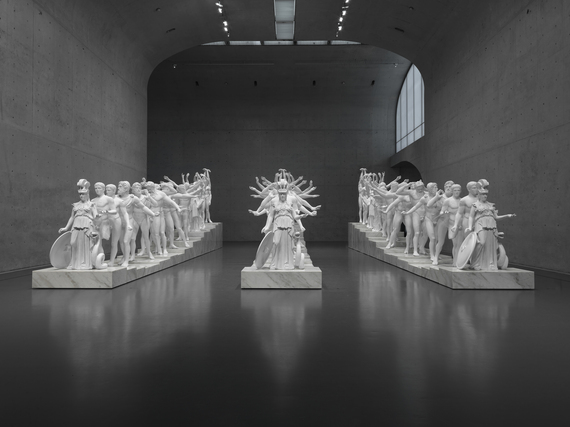 Building on the success of Eternity, Xu Zhen assembled and re-configured the forms of 19 classical sculptures for European Thousand-Hand Classical Sculpture, which was presented in his solo show at the Long Museum -- a private museum founded by the collector/couple Liu Yiqian and Wang Wei -- in March of 2015. Based on eight months of research and modeled from photos taken by a team of photographers sent around the world, European Thousand-Hand Sculpture was produced with a combination of fabrication techniques and traditional sculptural processes. A complex multi-figured project, it would have taken an army of skilled stone-carvers decades to execute, but Xu Zhen's fabricators finished their work in about a year and a half.

The reinforced concrete used in Xu Zhen's projects is only one many materials that is being utilized in conjunction with digitally based fabrication methods. Artificial stone composites, bound by cement or concrete, can be endowed with the appearance of natural stone through the addition of sand and crushed stone. Highly varied in terms of color, luster and weight artificial stone composites can be cast in a negative mold and then milled, chiseled, sanded and painted. Plaster, a familiar material often used in the 19th century for academic casts is also offering new possibilities. At Antiquity Stone in Morrisville, Pennsylvania, a dozen computer-operated stone cutting machines and two robots cut, mill and polish the works of owner/artist Jeff Koons, including his recent monumental plaster figure: Gazing Ball (Farnese Heracles). 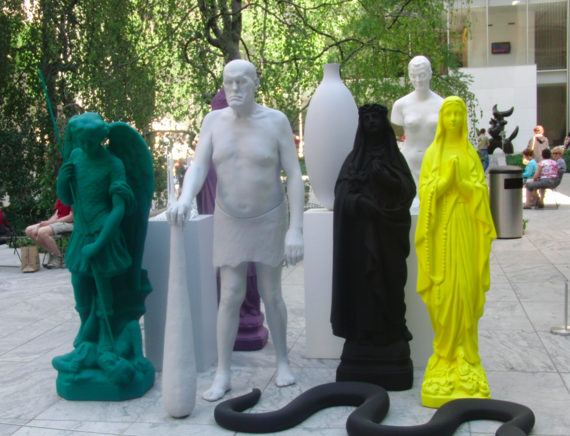 Sculptor Katharina Fritsch has something in common with Xu Zhen in that her fabricated works are often based on existing forms. Her digitally modeled Figurengruppe, which is based on cheap souvenir figurines often sold near European pilgrimage sites, was first made in painted polyester and then recast in 2010-11 in lacquered copper and bronze. A more recent Fritsch work, a blue rooster that appeared on a plinth in Trafalgar Square in 2013, began with a complex 3-D model that was used to develop a steel, wood, and eps foam "masterform" which was covered with 3-D printed parts. That form, in turn, was used as the basis of negative molds that produced the glass-fiber reinforced components of the final steel-supported sculpture. 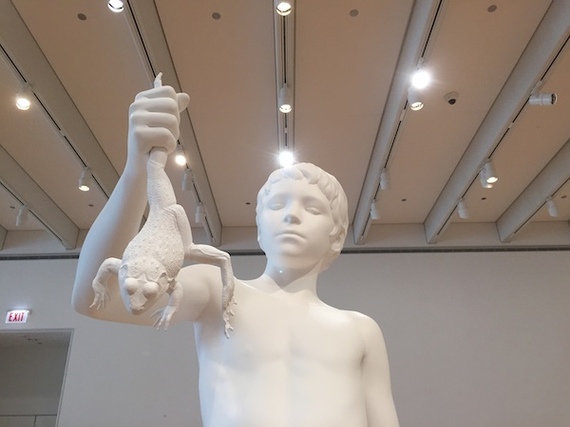 Charles Ray's eight foot tall Boy With Frog, which has been produced in fiberglass and cast stainless steel versions, is based on photographs of a live model which were scanned and then used as the basis for a 3-D digital model. A modeling software equipped with a "haptic interface" that provides feedback via touch was used by Ray to refine the digital model, which then became the basis of scale models in urethane foam.

For artists who want to use new technologies and methods to realize their work, there are some notable problems to be faced. Mark Rossi of Handmade cites "high entry costs in initiating projects, size constraints on machine working envelopes and difficulty in working to create usable files for machining." Rossi thinks of high tech fabrication as "a tool in the box" and notes that it has "inherent restraints." Nonetheless, it is clear that technology is forever changing the range of sculptures formal and expressive possibilities.

Along with striking new possibilities, the rise of fabrication raises aesthetic questions. Among the questions raised is what digital modeling and production does to the "soul" of works of art but further distancing them from the physical touch of the sculptor and sense of "drawing" underlying the form. There is a tendency for forms based on 3-D models to look just a bit too perfect, like the imagery of a high-end digital animation. Some artists may want that effect, while others may find it cold.

Also, sculpture has always involved collaboration -- for example, between sculptors and foundries--but the trend seems to be that sculptors are more than ever generators of ideas who rely heavily on the skills and knowledge of collaborators to realize their forms. When the original sculptures of the Parthenon were made it involved the collaboration between quarrymen and carvers who engaged in intense physical toil. The making of works like those of Xu Zhen involve a great deal of effort of a different kind: software designers are the new quarrymen and industrial fabrication machines are the new carvers.