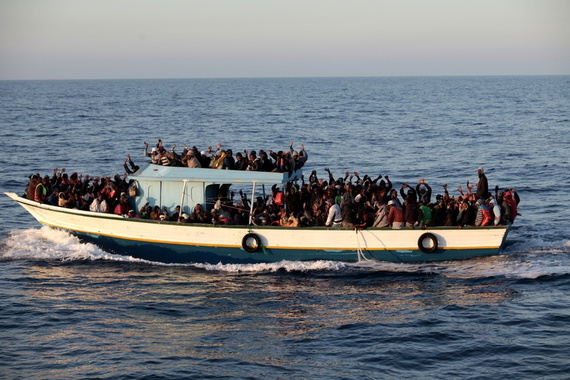 The number of refugees arriving in Europe today is close to the figures of the Biblical exodus. In 2015, 1,008,616 people arrived in Europe after crossing the desert and the Mediterranean on shabby boats and, according to the United Nations High Commissioner for Refugees, at least 3,771 of them lost their lives on this dangerous quest. Many of those who try their luck in Europe originate from Africa and are part of the "problem of integration in European societies" -- a subject making headlines in the past few months. Yet these people regarded as the cause of socio-economic problems in Europe could be considered as important resources. By doing so, we could rethink the whole relationship between Europe and Africa and promote different models of development.

The greatest majority of migrants from Africa request political asylum as soon as they arrive. Thereafter, they can opt between two designations to remain on the continent. The first is the status of refugee (based on the Geneva Convention of 1951) and the second is to request subsidiary protection granted by the European Union on the basis of one of its directives. In simple terms, both schemes grant asylum to a person who would be exposed to unbearable violence in their country of origin. Single European countries also offer international protection on the basis of their own juridical systems. However, this arrangement is not as reliable as the condition of refugee as it can change easily. In Germany, for instance, the beneficiaries of this measure are called "tolerated people" or "tolerated immigrants" (see this article from Spiegel). The problem is, a majority of African immigrants pledging for this kind of protection have weak legal rights, as in most cases they are not running from an immediate violent threat but from misery and deprivation. Said in simple terms, they are economic migrants. One could argue - and personally, I agree with them - misery is a threat. Nevertheless, so is the law and this is reason many people are denied the status of asylum, which has lead to the increase of illegal immigrants in the European Union.

LIMITED OPPORTUNITIES As a consequence, these people essentially have two possibilities: join the informal economy (= work on the black market), or return to their country of origin. As one can imagine, most don't want to go back because of lack of opportunities; the first reason they left in the first place. In consequence, they are left to try to survive in the informal economy. Often, this means exploitation, possible involvement in illegal businesses and insecurity.

An important point is that for many of these immigrants from Africa, being part of the informal economy is something they are very familiar with. Not because of a penchant towards illegal activities, but because a big portion of the African workforce -- up to 75 percent according to the International Labour Organisation -- already works in the informal economy. In Africa, it is a powerful social structure that allows millions to tackle conditions of extreme poverty (see my previous article on this subject). However, in Europe these immigrants who end up working in the informal sector frequently fall into the fringes of society: a recipe for social disaster.

REVERSE THE CURSE Yet, there could be a different way to intervene: by supporting these people with the possibility to use their skills from the informal economy to develop micro-businesses in Europe, formalise them, and eventually take them home. Training programmes on business and technical skills coupled with micro lending schemes structured on longer periods of grace would incentivise people to develop their entrepreneurial skills. Furthermore, a migrant who works is a burden removed from state budgets, and one who develops a new business linked to his/her home country promotes a more stable society for the African continent.

These ideas may seem like science fiction, but they are not: there is also a legal basis for it, managed and promoted by the International Organization of Migration through their Assisted Voluntary Return and Reintegration programme, a comprehensive approach to migration management that "aims at orderly and humane return and reintegration of migrants who are unable or unwilling to remain in host countries and wish to return voluntarily to their countries of origin". Indeed, this scheme is not very popular among migrants for the moment, as most of them have no desire to return home and potentially be exposed to the misery they fled. Yet, a programme aiming to create micro-enterprises for migrants would incentivise them to make use of their skills from the informal sector, strengthened by new skills acquired in Europe, market connections and availability of finance.

Working in Africa with the Ethical Fashion Initiative, a programme I developed for the International Trade Centre, I regularly witness the power of micro-enterprises and the willingness of young Africans to engage. Through targeted capacity building and a clear market framework, we assembled a network of small and micro producers who engage in manufacturing for local markets and international fashion brands. With ten years of experience in this sector, I can confidently state that micro-producers are one of the huge, untapped potentials of African societies. Through the Ethical Fashion Initiative, thousands of them are at work! I also meet many African immigrants in Italy who asked me to help them create their own micro business in Africa. This is not about funding huge schemes of work in Africa (e.g. industrial development), usually associated with corruption, inefficiencies and habitually failing to benefit ordinary people (read The Looting Machine by Tom Burgis). An intervention like this would generate development from "below" and support tax-paying citizens who challenge governments and desire to have a real stake in the existence of their countries. It could reverse the immigration conundrum faced in Europe today.