Growing up in poor neighborhoods and then running social service programs for 20 years, I heard countless stories about millions of people living in poverty. The percent of those in poverty never seems to change much, hovering around 15 percent, or more, of our population. The poor are depicted as stuck in a "culture of poverty." That poverty is now generational, and this image leads society to believe that if so many have been stuck, for so long, those folks must not know what to do. Some call those families lazy, while the good-hearted seek to save them. I ran social service programs for 20 years on the same assumption: if my workforce and other programs got poor families out of poverty, it would be the silver bullet. Once they knew how to work, they would either be happy or continue upward and rebuild our middle class.

Yet, there were two problems that I had to finally face. First, after two decades of my programs getting families above the poverty level, I was still seeing their kids or even the same families show up, once again, for services. Working placed them on the precipice of crisis, which our middle class faces, even today. The second problem was more personally perplexing. Having lived and worked in poor neighborhoods, I wondered where those millions of lazy people, not working much, if at all... lived? Almost everyone I knew or met, even with government support, actually worked. In fact, they worked really hard, demonstrating all kinds of talents. I observed a resourceful, rather than dependent, population. The stereotype of generational poverty didn't correlate to the reality I experienced.

Around 2009, I finally came upon a series of census bureau studies that proved my experience. A more recent study, published in 2012 , examined those under the poverty level wage and found that only 3.5 percent of the families in poverty remained in poverty for 3 years. While I had guessed that 80 percent of the families were working hard but hidden, the census reports indicated that, in fact, more than 96 percent of families worked to move above the poverty line in just 3 years. But, as with my family, within 3 years 30 percent would fall back under; probably from the types of crisis that my family faced: cuts in working hours, the car breaking down or an urgent need for medical attention. Another study by the Urban Institute showed that 50 percent of our working poor would fall into poverty within 5 years, and so on. Apparently these folks also picked themselves up again, as part of the next 96 percent that moved up.

This paradigm illuminates two things: 1) the 15 percent or so in poverty are not necessarily the same people, and, 2) they are not lazy or dependent. Cultural and generational poverty are myths. Poverty is episodic. Families try, and try again, forever cycling in and out of poverty. Although we offer help to those under the poverty line, there is almost nothing to help if you work your way out of poverty. It isn't that people don't know how to get jobs and work. The problem in America is that working hard doesn't pay. Benefits are provided when you enter poverty, and when you are wealthy. 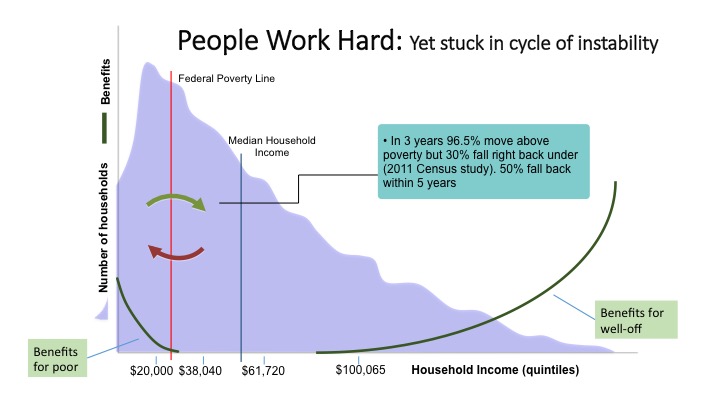 The table above shows the spread of the U.S. population by income. The black vertical line is median income which means that half of the population is to the left of that black line. Warren Buffet is way off to the right. The red line is poverty level income and most of the U.S. population churns back and forth above and then below that line. Because welfare and charity go away as you move above that red line, it means that people actually work really hard to move up. And yet, we don't recognize that initiative. Our helping system for the poor is set up to look at weaknesses, not initiative.

The other thing to notice are the green lines that more roughly depict the benefits we make available to people. The green line on the left is mostly welfare, and other benefits that are based on need. The more needy one appears, more support is made available. Important if one is in crisis. But when an individual gets a job or saves money benefits are then cut, and most are gone completely at 120 percent of the poverty level. The green line on the right depicts the benefits our country makes available to the more affluent through mortgage interest deductions, tax breaks, lower interest rates, etc. But if you look closely at the studies you find that there are almost no benefits available once a person moves above the poverty line, and not much more is available until once reaches an income over $80,000, annually.

There are two important things about this chart.

1. The vast majority of the people under the poverty level are not lazy or dependent. They don't need to have their hand held by "professionals," and they have lots of talents. Our work at Family Independence Initiative (FII) shows the families themselves would make better use of the funds we spend trying to help them. Yes, current programs can help the small percentage of people in crisis. But we should not define the vast majority of the working poor and those in poverty as not knowing how to lead their own change.
2. If we are willing to give benefits to the rich because we feel they work hard and create jobs, then we should make benefits, investments and awards available to the poor who also work really hard and also create jobs out of their kitchens or trucks.

The working poor are a huge, important part of our economy.