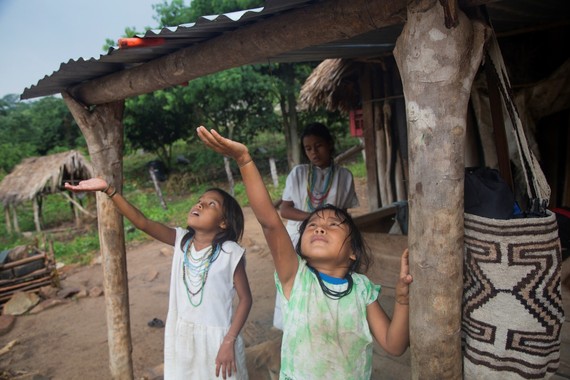 Ibeth Villafaña, left, catches raindrops with a cousin after a rainstorm under an eave near her home in Colombia. Photo by Sara A. Fajardo for Lutheran World Relief.

Now that an agreement has been reached between the Colombian government and the Revolutionary Armed Forces of Colombia (FARC), the current generation of Colombian youth will have a chance to see something they've never fully experienced before - peace.

The agreement seeks to end a conflict that dates back to 1964. It has claimed 220,000 lives and forced approximately six million people from their home and land, a national total second only to Syria.

The end to the conflict presents an opportunity to make an investment in rural areas and to build a viable peace dividend for those who suffered most in the war: the third of Colombia's population who live in the countryside, 90 percent of whom are mired in poverty. Many have been forced from their ancestral land.

Engaging in sustainable rural development in what is referred to as the "new Colombian countryside" is essential to building peace because it addresses the root causes of inequality and land tenure that drove the conflict. It is so important that it was the first issue agreed upon by the government and FARC in peace negotiations.

"It's our job to, little by little, reconstruct the social fabric that was broken by displacement," Ricardo Sabogal, director of the office of land restitution, told Bloomberg News.

Lutheran World Relief (LWR), in line with other interested observers, sees this as a pivotal moment for Colombia and the region. LWR staff in Colombia are focusing on supporting this investment in the new Colombian countryside, which will build on and preserve the newly won peace by promoting innovative programs with the private sector that promote family food security in former conflict areas.

One project involves helping the Arhuaco - one of four indigenous tribes living on the slopes of the pyramid-shaped Sierra Nevada de Santa Marta mountains on the northern tip of the Andes in northern Colombia - as they repossess their tribal homeland. The war and encroaching development forced them from the lowlands of the Sierra Nevada, and their land was seized by civilian landlords and armed groups that planted coca and grazed cattle.

The tribe has been systematically buying farms in the region and relocating families as part of a strategy to recover the traditional Arhuaco territory. They have already purchased more than 170,000 acres, with a plan to buy in excess of 320,000 more.

While living on the mountain, the Arhuaco grew coffee, which thrives in the lower temperatures and wetter climate of the higher elevation. But conditions in the new territories are hotter and drier, making coffee cultivation untenable. LWR is assisting these Arhuaco farmers as they transition to producing cocoa - a crop that thrives in the new conditions - by supplying technical knowledge to better maintain their cocoa plantations. LWR is also linking the Arhuaco farmers with buyers, including Pacari Chocolate, a world-renowned luxury confectioner based in Ecuador.

"They're doing quite well, given the circumstances," said Emilio Huertas, LWR's Colombia country director. Those conditions include water scarcity and adaptation to change. "Cocoa as a crop is new for them," says Huertas. "It's not a traditional crop, so this has been a cultural adaptation."

This is just one example of a nationwide effort to jump start development in the new countryside. The implications of this effort are enormous. It is the linchpin to keeping the peace and ensuring the long-term stability of Colombia.