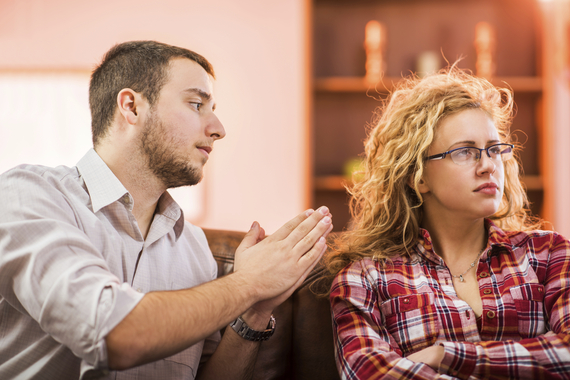 It was a dreary, cold March afternoon and the ride in the backseat was uncomfortable. I was confused. I was angry. I was overcome with sadness for a multitude of reasons. I was 15 years old and I was not alone in the limo.

My grandfather, David Crockett Fannin was lying at peace in a coffin in front of us. No one spoke as we followed the hearse to the gravesite. I was sitting between James and Claude Fannin. They were brothers. My Uncle Claude stared straight ahead with an expressionless gaze, while my Dad had his head in his hands. "You both are wrong," I blurted, breaking the deafening silence. "I'm ashamed to be a Fannin. For my entire life, both of you stubborn men haven't spoken to each other."

Was it a grudge? No one ever knew the real story of how my Dad and Uncle stopped talking to each other. We believe it was over money. No family members would ever discuss it. I never saw or spoke to my cousins. I wasn't allowed.

Angrily I continued my pent up rant, "And now you both go in silence to bury your father, my grandfather. You should be ashamed. This is ridiculous! This is wrong! It is NOT acceptable!"
You could feel the emotion as we left the car and walked to my grandfather's resting place. With the minister speaking as David Crockett Fannin was lowered into the ground, I witnessed a miracle. No words were spoken, but my Father and Uncle slowly held hands. We all prayed. We all cried.

Negative thoughts that produce anger, jealousy, resentment, disdain, scorn, condescension, or ill will are physically and mentally unhealthy. They are too burdensome for the champion. The successful person swiftly says, "I'm sorry." "Forgive me." "I forgive you." "Let's work this out."

Negative thoughts over time will take their toll. They slow you down. They attract what you don't want. They distract you. They keep you tethered to the very thing that upset you. You become the victim. You become the prisoner of the past, draining hope and positivity. These thoughts can eventually manifest themselves into a negative reality.

A few years ago I convinced a good friend to make peace with his father. They had been at odds with no communication between them. There was anger. There was resentment. Finally with my encouragement, he approached his father and they bonded. They straightened out their differences. Soon after, his father died. There were no regrets. My friend found peace and understanding. He has closure.

We all have people challenges and even conflicts. We all have disappointments with the ones we like and especially love. Let go of the story. It's the story that fuels our emotional unrest. Once the story is eliminated from your mind, nothing can power the negative feelings. Move forward. Let go of the past.

Most of us have been hurt by the actions or words of another. Perhaps your mother criticized your choice of a significant other. Maybe your business associate undermined your potential promotion. Possibly you divorced over an affair. These wounds can penetrate your soul. They can overrun your mind like weeds in a garden. They can produce feelings of revenge, hatred, bitterness and anger. Forgiveness, however, can set you free. By embracing forgiveness, you can also embrace the feelings of peace and hope.

Forgiveness is the process of concluding resentment, indignation or anger as a result of a perceived offense, difference or mistake, or ceasing to demand punishment or restitution.


With forgiveness you make a decision to let go of resentment and thoughts of revenge. It took my father a lifetime to release the story of his past that fueled his negative emotions. The act that hurt or offended him remained a part of his life. He even tried to pass these feelings on to his only son...ME. After forgiveness entered my father's psyche, negativity lessened the grip on him. It helped him move forward. Forgiveness even led to his feelings of understanding, empathy and compassion for my uncle, the one who he believed had hurt him.

Know that forgiveness doesn't minimize or justify the wrong. You can forgive the person without excusing the act. Forgiving, however, can make way for peace. It can lead to lower blood pressure, reduction of stress, increased new healthy relationships, decreased symptoms of depression and lowered risk of alcohol and drug abuse.

One of my clients was wronged by her husband's infidelity. After a nasty divorce and child custody battle, her life was a challenge. Because of her bitterness and anger, she repeatedly brought these emotions into all of her new relationships and experiences. These human interactions were interlaced with conflict, struggle and lack of trust. Her life was wrapped up in the negative past, crippling her from enjoying the present. She was becoming depressed and anxious. She had feelings that her life lacked meaning and purpose.

Finally by applying the S.C.O.R.E.® Success System, she cut the negative tether to her ex-husband by eliminating the replay of his transgressions. She began enriching her life by emotionally connecting to friends and family. She understood how her past experience had negatively impacted her life. She moved away from the role of the victim and released the control and power her ex-husband had in her life. She no longer defined her life by how she'd been hurt. She finally found peace. She would eventually find love again.

Forgiveness is a commitment to a process of change.

• Forgive swiftly. Do not allow lingering negativity.
• Forgive often. Make this a habit.
• Seek forgiveness, although it may never arrive.
• Move forward with hope and positivity.
• Learn from the past, then bury it and don't dig it up again.
• Learn to say, "I'm sorry" "Forgive me," "I forgive you," and mean it.
• Be honest with yourself and others.
• Monitor your thoughts for feelings of being a victim or judge.
• Replace all negative images, words and deeds with a positive, future vision.
• Use the S.C.O.R.E.® Success System to live in the moment.

How powerful is forgiveness? It releases the negative past and opens a revitalized energy source that can pave an amazing future of simplicity and balance.

Make amends. Bury the hatchet. Make peace. Pick up the phone. Look them in the eye. Control the situation or circumstance by making the first move. Empty the anger from your heart. Sever the tethered thoughts that keep you connected to the negative transgression or offense. Move forward.

My Father and Uncle finally became good friends after they left my grandfather's gravesite. They spoke often. They met often. They forgave each other. I still can see them holding hands, as if they were kids again. They were brothers. They loved each other. They embraced forgiveness.

Get in the forgiveness Zone.