In 1995, world leaders signed the Beijing Declaration, a roadmap for women's rights and empowerment. Now, 20 years on, they gather at the United Nations to adopt the Sustainable Development Goals, one of which is dedicated to gender equality. Despite progress on multiple fronts, parity between men and women remains an elusive goal. But achieving it offers huge economic potential -- if full parity were to be achieved, the contribution of women to global GDP growth could double between 2014 and 2025, adding as much as $28 trillion or 26 percent to the global economy. This is roughly the combined size of the economies of the United States and China today.

Even in a scenario in which countries do not achieve full gender parity but match the progress of the neighbor in their region that has made most headway in closing its gender gap, up to $12 trillion could be added to annual global GDP in a decade -- equivalent to the current GDP of Japan, Germany, and the United Kingdom combined.

To accelerate progress toward parity and achieve the substantial economic benefits on offer will require action not just on gender inequality in the world of work, but in society as a whole and on attitudes and beliefs about the role of women. A new tool developed by the McKinsey Global Institute -- the Gender Parity Score, or GPS -- has established a clear link between the three. Gender equality at work is not achievable without gender equality in society and a shift in attitudes.

The GPS takes a comprehensive view of 15 gender equality indicators spanning work but also physical, social, political, and legal aspects. It measures the distance from gender parity of 95 countries that are home to 93 percent of the world's female population and generate 97 percent of global GDP. Forty of the 95 countries have high or extremely high levels of gender inequality on at least half of the 15 indicators.

Given the size of the gender gap and its multifaceted nature, it is necessary to focus on the most egregious gender equality gaps -- whether a type of gap or a particular region -- so that the right gender issues for the right women in the right countries are tackled.

In a similar spirit to the United Nations' Millennium Development Goals, a short list of simply stated and achievable objectives to help focus and rally action, MGI has identified 10 top gender impact zones -- the largest concentrations of gender gaps experienced by women in the world.

Five of the zones are global -- these are issues that affect women wherever they are. The first is blocked economic potential, reflecting persistent wage gaps between men and women and a low share of women in leadership positions. Even in the region that does best on elevating women into top roles in business -- a composite region of North America and Oceania -- women still only account for 74 percent of the leadership positions of men.

The second global impact zone is time spent in unpaid work. Across the world, women, on average, spend three times the amount that men spend engaged in domestic and care work. In some countries, the gap is much larger. In India, for instance, women spend nearly 10 times the hours of men in unpaid work; in Japan, a highly developed economy, it is nearly five times.

Third is inequality in legal rights. In 18 of 90 countries, daughters do not have equal inheritance rights to boys, and in 16 out of 75 countries there is no domestic violence legislation.

The fourth global zone is political under-representation that persists in developed as well as developing countries. Globally, the number of women in ministerial and parliamentary roles is just 22 percent that of men.

Finally, violence against women is a serious issue in a very large number of countries. In most countries, 30 percent of women report that they have experienced physical and/or sexual violence from an intimate partner. The figures are far higher in other countries. In Angola and Ethiopia, more than two-thirds of all women have reported such violence. No country in the world has reported prevalence rates of lower than 5 percent.

There are also five regional impact zones. The first is low labor-force participation in quality jobs, which is concentrated in India, South Asia, the Middle East and North Africa (MENA), and sub-Saharan Africa. Female labor-force participation is between 20 percent and 32 percent that of men in Algeria, Egypt, Iran, Pakistan, and Saudi Arabia, and about 35 percent that of men in India, Morocco, Oman, and Yemen.

Second, low maternal and reproductive health is a particular problem in sub-Saharan Africa. This region is home to 60 percent of all the women around the world who die in childbirth and 23 percent of all women who don't get the family planning they need.

Fourth is financial and digital inclusion. This zone stretches across India, South Asia, MENA, and sub-Saharan Africa. Women's access to financial services is less than 50 percent that of men in Chad, Niger, Morocco, Pakistan, Saudi Arabia, and Yemen. Women's use of the Internet and mobile phones remains only 50 to 75 percent that of men in Bangladesh, India, Iran, Senegal, Turkey, and Uganda.

And, finally, girl children are most vulnerable -- measured using sex-selective abortions and child marriage -- in China, India, and South Asia. India and China are home to an estimated 1.5 million "missing" girls each year -- 98 percent of the total in the 95 countries MGI studied. In India and South Asia, about 26 percent of girls between the ages of 15 and 19 are married. These two regions account for almost 60 percent of the global women affected by this issue.

These 10 impact zones do not include all countries affected by a particular gender inequality issue. In addition, some countries have smaller gender gaps to bridge, but nevertheless are home to a large number of women still affected. For instance, China and Indonesia are home to 109 million women, or 17 percent of all women worldwide, who are not in the labor force. Twenty percent of the world's women who die in childbirth -- 48,000 women -- are in India. Twenty-seven percent of all women affected by gaps in digital inclusion -- that's 14 million women -- live in just six countries, including relatively prosperous Germany and Japan.

Only by understanding the full range of gender equality issues in different countries and regions can an effective route toward gender parity be plotted. Focusing the world's attention, energy and resources on these 10 would address more than three-quarters of the women in the world who are affected by gender inequality, and could make a substantive contribution to bridging the global gender gap in a reasonable timeframe. 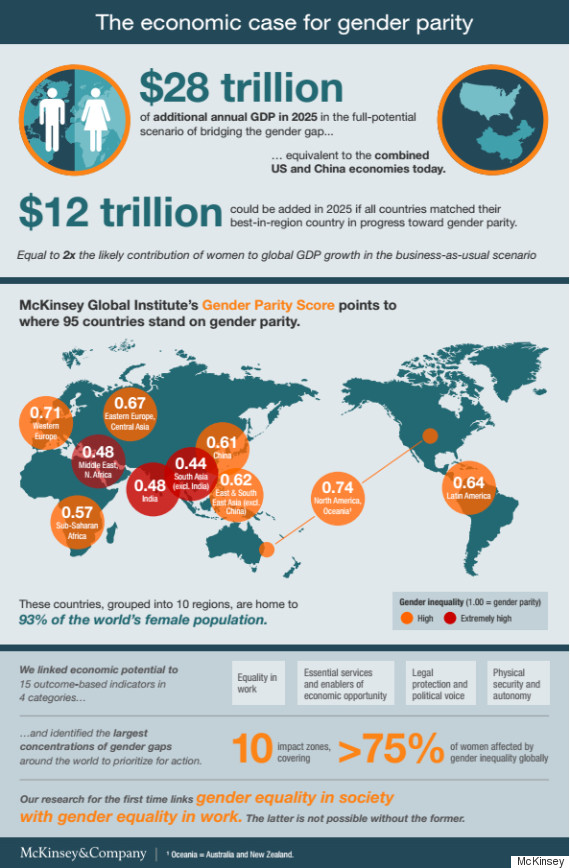 James Manyika and Jonathan Woetzel are directors of the McKinsey Global Institute based in San Francisco and Shanghai, respectively. Anu Madgavkar is an MGI senior fellow based in Mumbai. They are coauthors of a new report, The power of parity: How advancing gender equality can add $12 trillion to global growth.