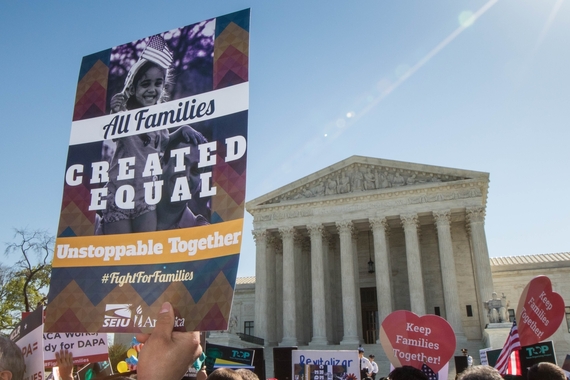 This past Monday I had the pleasure of speaking before thousands of supporters of the President's immigration executive action, DAPA and expanded DACA, at a rally on the steps of the Supreme Court. The rally brought together people from across the country who believe in keeping families together and opposing hateful rhetoric against immigrants.

Inside the Supreme Court, the Solicitor General presented a strong argument in support of DAPA and expanded DACA. He pushed back against Texas' arguments and detailed why Texas had no basis for bringing its challenge in the first place.

A ruling against DAPA and expanded DACA will not only affect immigrant families, but all families, and it'll send a message of hate to U.S. citizen children whose parents are vulnerable to deportation.

Just like the story of Maria, a member of the Service International Union (SEIU ) of Texas, and mother of a 12 year-old U.S. citizen.

Maria came to the United States from Mexico 14 years ago in search of a better future for her family. She worked as a janitor for 8 years and is now a full-time mother. Like many U.S. citizen children whose parents are eligible for DAPA, Maria's daughter lives in fear of being separated from her parents. She cannot imagine living in a world where she would not have the care and tenderness that only her mother can give her and of being unable to fulfill her dream of becoming a veterinarian without the support of her parents.

Maria can't give her daughter the certainty that she'll be present in her life because Maria knows she can be deported at any time. And just like many in her situation, she moves forward and continues to fight for a solution.

This fight for DAPA and DACA is personal, not only for Maria, but for our entire community regardless of our immigration status. It's personal for our nation that was founded by immigrant families. Personal to the organizations and businesses that invigorate our country. Personal to the millions of families who have strengthened the past, and continue to strengthen the present and future of our communities.

We can't betray our nation's fundamental values ​​of compassion and justice. We won't let that happen.

On April 18, we raised our voices with close to 5,000 people outside of the Supreme Court in Washington, D.C. We made our presence known on social media and in over 20 cities across the United States to show our support for the president's immigration initiatives. Our voices and our stories have the power to change our future and the future of immigration policy, and protect those very values that make America a beacon of hope for all families.

We know that DAPA and expanded DACA are on the right side of justice. No doubt about it. We must have faith and fight forward until these programs are unblocked and we reach our north star, common sense immigration reform with a path to citizenship.