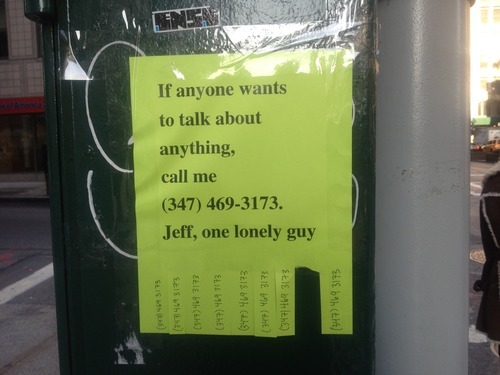 He strikes when you least expect it: You're walking home from work on what was a reasonably pleasant and painless day (you finished a project, had an egg sandwich) and suddenly, as you're turning the corner to your apartment, your thoughts take a turn for the worst. The mere thought of even sitting by yourself in your apartment becomes stifling, and the idea of seeing your roommate or spouse there, tooling around in the kitchen -- even worse.

And this is when the realization hits: Loneliness has arrived. No, Emptiness. Actually, how about: Absolute Lack of Feeling About Anything in the World. These three musketeers have shimmied up to your door while you were gone, and are now hanging out on your stoop with a couple of cigars, stinking up everything around them. You're not technically "alone" anymore because you've got these three chums, but who the heck wants them?

So what do you do when you're feeling lonely in NY?

Loneliness/Emptiness/Absolute Lack of Feeling are actually pretty rare emotions when you're living in N.Y.C. Most of the time, we're clogged with too much emotion: frustration over a competitive passion we're pursuing, excitement about the date we're having at that new, rustic Italian spot, appreciation for our dishwasher.

So on days when we just can't seem to understand what we're still doing on this Earth, it's important to remember that Emptiness doesn't stay for long. That's not his nature. He passes on to someone else eventually -- but in the meantime, he's all yours. So you've got to bask in his graces like a kiddie pool before you're stuck back to your ol' effusively emotional self, feeling so damn angry about that chick whose bag had its own subway seat on the 4 train at rush hour. People, these days.

Have you ever smiled at a stranger? Someone you're passing on the street and may never see again? Someone who bears no benefit to your career or your romantic life? When you smile at someone for no reason other than to pass it along, something happens: They smile back.

And when they do, you share this second-long moment together that becomes your iridescent little secret. It's the strangest thing: It's as if you both smiled and realized at the same time that, perhaps, none of this is really real, or there are no boundaries between us all, or this day is actually going to be okay. And I know that when I have a moment like this, I pocket it, quite literally, because to share a secret with a stranger like that? It's irresistible.

Skyscrapers hover over us like oak trees, leaving little room for some blue-sky-to-eye contact. But that's okay. Because when you're feeling lonely in New York, it's important to remember that someone, somewhere, is feeling just as lonely, too. In fact, it's statistically impossible for you to be the only lonely person in New York. You're special but, come on, you're not that special.

Somewhere, on the 11th or 52nd floor of an office building, tenement, apartment complex, sits a person no better or worse than you who has no idea how Loneliness/Emptiness/Absolute Lack of Feeling managed to find the key into their apartment. And when you connect with this person, when you both empathize with one another, something magical happens that floors you both: you're no longer lonely.

This post originally appeared on This Is Why I Love NY.