Today, I'm please to share my byline with Drew Goldsman, urban resilience planner for the Nature Conservancy's Connecticut chapter, to shine a light on an innovative project in Bridgeport, where a wetland designed to manage runoff from rainstorms is also bringing a neighborhood together:

Stormwater management is a major challenge for cities all over the world. When it rains - especially heavy downpours - the water flows straight from the concrete infrastructure into (often antiquated and overloaded) sewer pipes and then into surrounding rivers or oceans. The unfiltered pollutants can create major environmental damage, not to mention personal tragedies when streets and basements overflow.

At The Nature Conservancy, we are convinced that natural green infrastructure can help improve the management of both the quantity and also the quality of city storm water.

The Example of Bridgeport, CT

As with much of the highly urbanized Northeast, coastal Connecticut was inundated by the storm waters of Super Storm Sandy. As Connecticut's largest city and home to some of the state's most underserved residents, Bridgeport now needs to reactivate the largely forgotten waterfront while simultaneously crafting ways to reduce the impacts of Long Island Sound storm surges (exacerbated by sea level rise) and allow rain water to move through the city with as little negative impact on neighborhoods, schools, health and safety, and water quality as possible.

In addition to the threat of infrequent, yet potentially catastrophic, storm surge, there are a number of areas in the city that are prone to flooding during rain events. For example, a one-inch storm event brings 300 million gallons of storm water to Bridgeport! One area, adjacent to a historic housing development called Seaside Village, is the site of a truly transformative project to help address flooding while creating a community amenity with wetland habitat.

Led by the Urban Ecology Lab at Yale University and in collaboration with community leaders from Seaside Village and the City of Bridgeport, the Seaside Village Stormwater Garden project is addressing a triple bottom line: reducing flooding of a parking lot and nearby homes, providing wetland habitat, and creating an oasis of native vegetation and wetland features in an otherwise paved and/or manicured urban landscape.

The Conservancy's Connecticut Chapter has played an integral role in the project, which started with a city-wide coastal resilience planning process, continued through design and installation stages and is maintained with volunteer workdays.

Underneath the installation is a series of monitors and gauges that track the flow of water. The site is set up as an experiment with different soil mediums and planting mixes in separate swales to identify their impact on water infiltration and water quality. In addition to the storm water infiltration benefits, the installation supports native wetland and upland vegetation that provide bird and butterfly habitat and seating areas for community members. 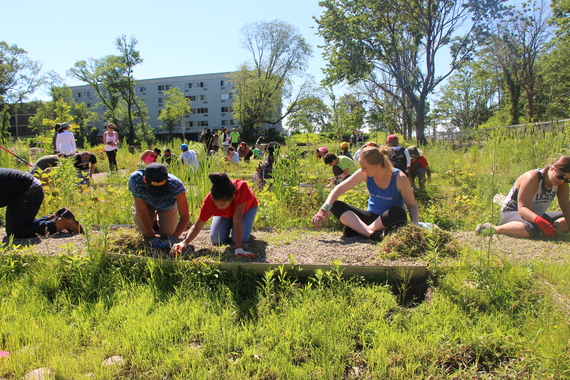 While there is a growing body of research demonstrating the effectiveness of green infrastructure as a cost-effective tool for reducing stormwater runoff, it is critical to assess local conditions. The ecological results are still coming in, but it is clear that the site is helping to alleviate flooding to the adjacent parking lot and potentially nearby homes.

Beyond the natural infrastructure's specific engineered goals, the site has succeeded in building the community's involvement in the underutilized communal "lawn." Growing interest and demand soon led to the creation of a community garden, with raised beds for vegetable production and a large fenced-in dog run. Altogether the three sites form a cohesive and dynamic suite of green spaces that engage the community with nature in new and creative ways.

The Connecticut Chapter - A Leader in the Conservancy's Cities Initiative

The Connecticut chapter holds up the Seaside Village Stormwater Garden in Bridgeport as both a demonstration of the Conservancy's commitment to revitalize and strengthen local neighborhoods, as well as an example of innovation in community engagement and resiliency.

"We're building a team around urban issues across the entire state. Pulling from our extensive expertise in land management and coastal resilience, the team is focused on identifying priority projects from the ground up that will foster stewardship of the city's natural infrastructure and contribute to a thriving, more resilient Bridgeport," said Frograd Ryan, Connecticut state director for The Nature Conservancy.

"Moving forward, we are excited to be embarking on more projects in Bridgeport where investments in nature will have the greatest social and ecological benefits," she said. 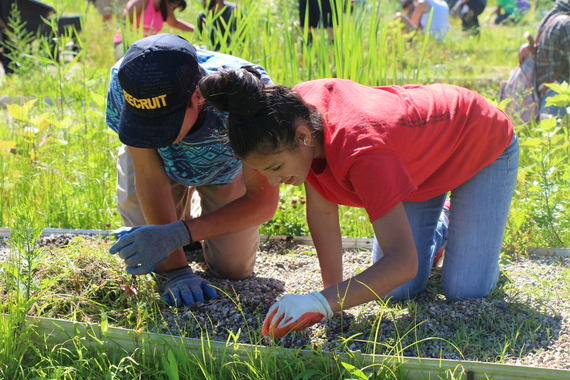 Our efforts in Bridgeport are pioneering work. We are trying to understand all the key benefits for a city embarking on this approach and will continue to evaluate the ecological, social and financial advantages of green infrastructure versus the traditional approach. Cleaner, slower flowing water is the major environmental benefit.

But as the two photos above show, the potential impact of deep social resident engagement is another crucial factor in our work. After all, what better way to engage city residents in a more effective protection of their homes - as well as a love and appreciation for nature in general.

Our goal is to understand, improve, and then scale up. We have several other cities running similar projects around air quality, urban heat or coastal resilience issues. As these projects mature, we will be able to present them to our cities network and develop our urban work to the same scale and scope that has made the Conservancy's traditional conservation work so powerful.

Pascal Mittermaier is the Global Managing Director for Global Cities at The Nature Conservancy. You can follow Pascal on Twitter @PascalMitter. This piece was originally published at: goo.gl/1aVvIx