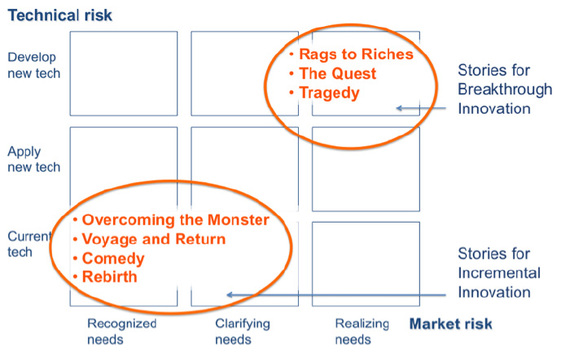 Exceptional design is good storytelling rooted in a strong design philosophy. But whether the design philosophy is "form follows function" (Horatio Greenough), "less is more" (Ludwig Mies van der Rohe) or "friendliness" (Steve Jobs), how does one create good stories that support either incremental or breakthrough innovation?

Like art, good storytelling can be said to be "goal directed play" with the intent of "making values, beliefs, visions and missions special" to support action. Stories communicate real or fictional events and experiences by improvising as well as embellishing and are shared in all cultures for entertainment, education and self-preservation.

A good story contains a protagonist, a challenge and a narrative point of view. The rare exceptional story has the ability to unite and inspire people, hitting us at our core with mesmerizing and memorable insights. Think Alexander the Great, Winston Churchill and Steve Jobs.

Archetypical stories lend themselves to specific types of action and thus promote different levels of innovativeness in the outcome.

We now have guidelines and metrics for the quality of the design story. Studies at Stanford University show that good stories for incremental innovations are co-created by cross-functional collaboration and focus on user behavior while a strong leader's story is key to focus on activities for breakthrough innovation. Often the leader's story is key to the business, think Richard Branson, Bill Gates and Steve Jobs.

Below is an example of one good and bad story based on how the narrative is shared.

Good story: Steve, a visionary but socially awkward California kid, sets out to liberate people with personal computers. Succeeding, publically disgracing him, a backstabber then maneuvers him out of his company. Steve then first builds the world's best high-end computer firm and then the world's best digital animation studio. When his old friends beg him to return to save the now bankrupt original firm, Steve, now a mature leader, transforms the world of digital entertainment and computing, making an amazing comeback and turning the defunct firm into the biggest and most beloved and profitable company in America.

Bad story: A confused young man markets the opportunities in his gullible friend's consumer invention and becomes rich and famous. Now a troubled tyrant, he loses everything, starts a couple of ventures and eventually returns to regain control of his old, now faltering company. Luckily, the firm develops a new line of computer products, music products and entertainment products, becoming the leader in a new industry and money and fame returns.

Successful leaders need also to be excellent storytellers, for if they do not successfully tell their own story and control the narrative, then the press, their costumers or their competitors surely will. If one can find an archetypical story that matches the firm's innovation type and co-create an incremental innovative story or a breakthrough leader story that is good and authentic, it can swiftly move mountains and be an integral piece of their success.