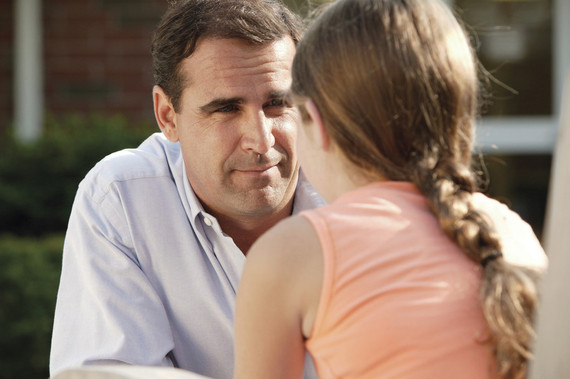 A few days ago I witnessed the following dialogue between a pre-teen and her mother who were waiting next to me at a traffic light: Daughter: "... and they did not invite me to sit with them at lunch." Mother: "I told you to do your hair up in the morning, you would look so much better. You'll see, that can make a big difference."

I can feel for both, mother and daughter. Now that I have spent some time to re-sensitize myself for communication traps in our own family, I hear the mother's own fears -- fears I can absolutely relate to -- through her words: is my child unpopular? What if she keeps getting excluded by her peers? I have visited exactly that uncomfortable place just a few weeks ago:

Son: "I hate this weekend. Nobody wants to hang out with me. Everyone is busy." Me: "Of course everybody is busy. I told you so often to make plans earlier. Get your friends' phone numbers and make plans at the beginning of the week, not on the day you want to do something!"

My own lack of empathy, my need to jump in and dismiss my son's experience as a mistake he made, is not much different to the mother's response to her daughter. But what about our child's inner voice: something's wrong with me. Otherwise the popular kids would have invited me to sit with them at lunch... maybe I'm a weirdo. Everyone is having fun except me.

It's not surprising that mothers get unnerved by the idea that their kids feel lonely. Most of us have been in that place when we grew up. There may be exceptions. But feeling left out occasionally is one of the most terrifying experiences of being human -- and one of the most common ones too. We are hard-wired to be alarmed when we get rejected, because on a primeval level we know that we need our tribal peers to survive. We want to fit in. We have an instinctive need for acceptance.

Meanwhile, motherly fear of our child's social exclusion turns us into a verbal steam engine: Told you! Had you done what I said this wouldn't have happened. Pre-teens often doubt their self worth when they experience rejection, frustration or loneliness. Some may have a perfectly healthy perspective on the ups and downs of growing up and shrug it off. But often this goes deeper.

How can we tell what we are dealing with? If we jump in and tell our child: "told ya! I gave you a solution but you wouldn't listen. Now you suffer!" we starve the conversation of what it needs to grow: empathy. If a friend told me that she finds it difficult to make plans, I would recognize her need for sharing something she struggles with, no doubt. I would respond in a "tell-me-more" manner, seeking to understand. However, with my own son I exhort, urge and stop him from sharing more.

Suffocating a dialogue certainly doesn't help our kids to get to know themselves, nor does not build trust between them and us. The "told ya" response wastes a great opportunity to connect when kids go through their first independent social experiences, including the pain that occasionally comes with it. I deeply believe in developing self-knowledge as one of the key qualities to live life well, especially in complex environments. As so many things, helping our kids to continuously develop their understanding about who they are can be surprisingly simple.

One thing we can all do is to remember that vulnerable stage in our own lives at age ten or so. When we were not wearing the right brand of jeans (that's me), were not invited to that in-party (also me), and as a result did not feel welcome in a group. I have a handful of memories that I can access, and I can now catch myself when I want to fix my kids' problems. It is painful nonetheless. But then, we are human, and our emotions are an important resource to learn what it is to be human. I told my kids the story of a girl in my class who was allowed a party of eight classmates. She did not choose me. And when I heard about how awesome it was the following Monday, I did not know where to look. I was embarrassed and convinced that I would never ever in my life be worthy of having fun.

Yesterday my son told me that in our building some friends who seem not to want to hang out with him as they used to. I asked him what happened, and then I just listened. This allowed him to talk about it until he gets it: they are crazy about football... and I hate football. They are always playing football, but I like music and basketball. Maybe that's why we grew apart... At that point, the edge is taken off the subject. He may still feel excluded and that can be frustrating. But at least there's perspective. He owns the reasoning process. He can draw conclusions without me criticizing or rescuing him.

Being prone to reasoning rather than listening when I see my kids struggle, this is a big lesson for me. Sometimes, shutting up makes all the difference. This way, we can find out whether we are dealing with a typical teenage situation or whether we need to dig deeper. We create that sacred safe space.

With friends, we would not think twice about doing that. But kids can reconnect us with our own deepest fears -- especially in the pre-teen years, when they experience peer dynamics. Yes, going back to those moments in our own lives may be uncomfortable, but worth the effort. I am making a promise to myself today to be true to my trust in self-study with my own children. Hopefully, they give me another chance.

More:
Parenting Parentspre-teensparents-momsempathy
Newsletter Sign Up
Raise the kind of person you'd like to know
Subscribe to our parenting newsletter.
Successfully Subscribed!
Realness delivered to your inbox