As Rob Manfred, the new commissioner of Major League Baseball, took the stage, I couldn't help but notice the person sitting to my left. Donning slacks and a sport coat, his wardrobe mirrored that of most attendees, but there was one very noticeable difference. He was about five feet tall and too young to legally drive a car, let alone sip a beer during the conference happy hour.

His name was Jonah White, and at 14 years of age, he'd traveled from Brooklyn to Boston to attend the annual MIT Sloan Sports Analytics Conference. The two-day event attracts some of the biggest names in sports, like Phil Jackson, Adam Silver and Andrew Luck. As an 8th grader, not only had Jonah chosen to attend one of the world's premier sports conferences, but he told me that he is already "working on an independent study in baseball analytics."

To my surprise, Jonah wasn't even the only student from his school in attendance. He was joined by two of his fellow sports-obsessed classmates, Manu Herskovits and Sam Hafetz. Manu aspires to be a "college recruiter or MLB scout," and Sam hopes to become a team's general manager or political/sports analyst like Nate Silver. Similar to Jonah, Manu said that he is writing a "research paper on the education of college athletes." All three attend Saint Ann's School in Brooklyn Heights, N.Y. 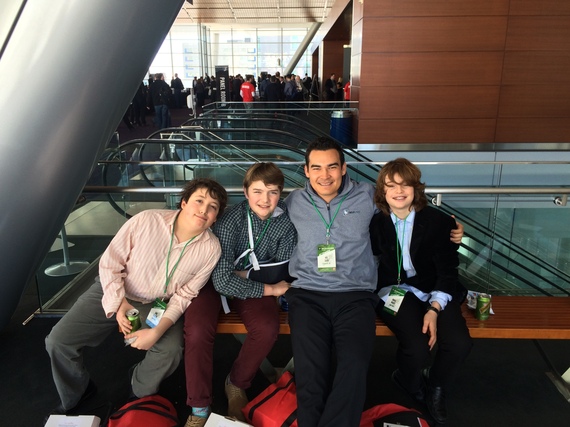 To say that they stole the show would be an understatement. They devoured the conference. Listening intently in each session, they rushed the stage to meet the speakers in person and even collected their autographs.

Impressed by their zeal and initiative, I posed a few questions to learn more about them and how they'd wound up in Boston.

- How did you guys first hear about the conference?

"I (Sam) discovered the conference when I was reading online."

- What did your parents say when you asked to attend this conference?

"They were all for it! In fact, this is our second year attending."

- Who were your favorite speakers?

- What do the other kids at school think of your attending?

"Well, we don't really want others to know about it or they may follow suit. But most kids don't like sports as much as we do."

Unlike Jonah, Manu, and Sam, most of us didn't attend professional conferences as 8th graders, and it speaks to the powerful revolution in sports analytics, which has attracted not just former athletes but many bright minds previously sheltered from the conversation. The shift can be largely attributed to Michael Lewis' book Moneyball; it has changed the way that sports are analyzed and has spawned a healthy dialogue questioning many traditional conventions regarding sports strategy.

And as evidenced by Jonah and company, there isn't any sign of things slowing down. They told me that they've been interested in sports analytics for five years (since the age of nine). And one of the noblest aspects of the MIT conference is that it keeps a portion of discounted seats available to students, favoring youth participation over revenue maximization.

So while these 8th graders have plenty of time to decide what they ultimately want to do in life, such a dedicated emphasis on studying and evolving the industry will likely usher in a whole new breed of sports decision makers. Perhaps they'll be among them.