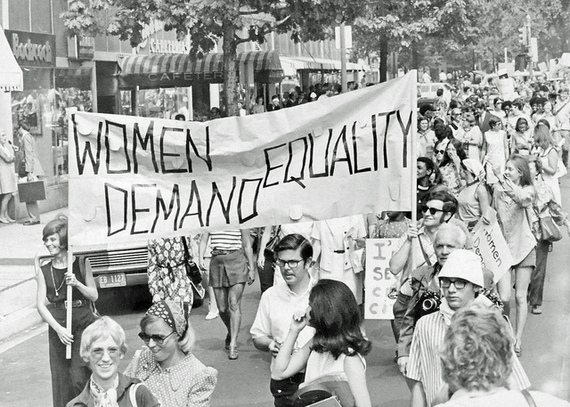 Today is Women's Equality Day, which marks the 94th anniversary of the 19th Amendment that guaranteed women the right to vote. It was the culmination of a long struggle by generations of women who fought for equal access to the promise of the American Dream. The right to vote, they believed, was the main hurdle in the way of equality. Once political equality was achieved, social and economic equality would soon follow. Despite the myriad of successes women have achieved since then, true equality remains a distant dream.

Today women are still denied basic pay equity. I've written before about the harsh reality of the gender pay gap and the detrimental effects it has on American families. Nearly every day new stories and studies prove that gender discrimination is a real and present threat to women in the workforce and their families.

Yale University recently found that two identical resumes, one with a male name and one with a female name, received markedly different reactions from employers. The employer consistently ranked the female applicant lower in competence and hire-ability, despite identical qualifications. Female applicants were also offered $4,000 less as a starting salary.

Yet despite this reality, opponents of equal pay continue to deny the very existence of discrimination and a resulting pay gap. They argue that such legislation would be redundant and unnecessary. Their actions tell women to accept their status as second-class citizens who deserve less than their male counterparts.

Women also continue to struggle to achieve equality of health care. Although the Affordable Care Act sought to rectify the disparity by guaranteeing coverage to all and making it illegal for insurance companies to charge more to women based solely on gender, there is still far to go. Women can be denied access to birth control, and face increasing restrictions in access to abortion. Women are not even guaranteed control over their own bodies.

In the near century that women have had the right to vote, they have used it to push for progress and justice. Yet despite their many hard-fought battles, real equality remains elusive. This November, I urge women to once again use their votes for social change. This November, vote against those representatives, like my own Congressman Dave Reichert, who have stood in the way of women's equality.