Lior Suchard says it's all about focus. "It's the difference between a flashlight and a laser beam. Both are light, but the laser beam is much more focused so you can see more. If you can focus your mind, you can do the same." 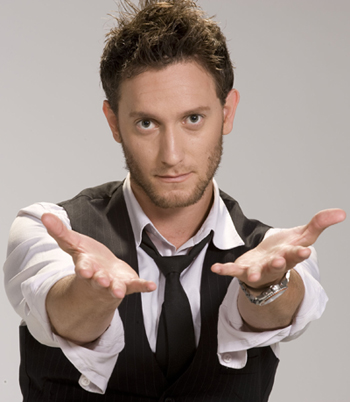 Suchard is talking to me, trying to define what he does. I imagine he gets tired of doing so, as what he does defies definition. The cynics among us will say it's trickery. A person who believes in the power of the mind as I do, will say it lies in the power of the mind. And, as opposed to others who do such acts, my brief very unscientific audience survey ("Excuse me. May I ask you a question?") indicated that most people do not suspect trickery; suspect that there's someone offstage somehow whispering in his ear. The people I asked were quite wiling to believe.

At 27, Suchard is the heir apparent to Uri Geller, the self-described Israeli "mystifier" who gained fame bending spoons seemingly only with the power of his mind. In fact, Suchard was the winner on a TV show that designated The New Uri Geller.

Over the years, there have been "debunkers" like James Randi who said he can explain exactly how Geller does what he does. I am not choosing sides. I've seen demonstrations of the power of the human mind and I am a believer, as these demos had nothing to do with entertainment or stagecraft and weren't strictly "demos," but were incidents that proved the power of the mind is real. In the original sense of the word, the human mind is "awesome." Believing that, I believe Lior Suchard.

I met Suchard when he opened for Joan Rivers at The Venetian last week. His very truncated act ("In Israel I have an opening act.") gave us a taste of his capabilities. He pinpointed the number between one and 100 an audience member chose. He was able to name the first love of a woman from the audience he'd sent out of the theater to think about it. Finally, he brought up a couple, placed them on opposite sides of the stage tapped the man's head and the woman -- eyes closed and clearly separated from the man -- flinched as if it were she who'd been tapped. The audience gasped.

I spoke with him briefly after the show and he further astounded me by guessing my number, by bending my quarter, with my initials on it, in my hand. Finally, he guessed the name of the person of whom I was thinking. My next thought was, "I've gotta sit down and talk to this guy." So I did that on Friday.

We met, along with his manager, at a café at his hotel. He told me he was born in Tel Aviv, the youngest of three sons of an entrepreneur and a secretary. "I was seven when I first started realizing I could do this," he says. "I think I had -- what do you call it? -- attention deficit, but I could focus. [Note: My friend Valerie says she has the same condition and it's called "hyperfocus" and is common in people with ADD.] My two older brothers were my guinea pigs. I'd ask them to think of numbers or have me guess in which hand they are hiding something.

"What I do today is a combination of a gift, a talent, and understanding and developing that gift."

His high school math teacher, aware of what he could do, made a contract with the young Lior:

He told me I'd have five minutes of every class to show the other students something incredible. It had to be connected with math, so I'd do things like ask him to think of a formula. I'd write on my paper, then he'd write it on the board. It would be the same.

Suchard graduated from high school and did his mandatory three years in the Israeli army. "I was a combat soldier. I can't say any more, but the army took advantage of my skills."

When he got out of the army he began to perform. Then, three years ago came the Geller TV show. "It was a live show," Suchard says. "It got a 40 percent rating in Israel and it was also broadcast in England, Poland, Germany, China and on Al Jazeera. Nine people started as contestants and, 12 weeks later I was declared the winner."

The show provided a boost to his career and he's performed around the world.

I couldn't help asking a series of questions, the answers to which make the question obvious:

People ask things like, 'Can you talk to my dead father?' Or, when I meet someone and ask their name, sometimes they'll say, 'You tell me.' And, yes, in Israel I have groupies. I have to wear sunglasses and it's hard for me to go about unrecognized.

And, he said someone along the way, that when he asks an audience member to draw something on a piece of paper for him to guess, "Too many people draw happy faces."

Suchard had come to our lunch prepared. I'd lost my original bent quarter so I gave him another. We each wrote our name on one side of it, he placed it gently in my hand, curled my fingers over it, turned my hand over, tapped it, told me to slowly wiggle my fingers and slowly open my hand. The quarter was bent.

Then, he asked if I'd like to play roulette. Usually I'd say no, but I assented. "How many games?" he asked. "Up to five." 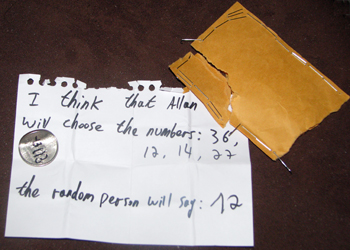 Suchard next opened his wallet and extracted a small brown envelope. It was stapled all around and glued shut. Clearly, there was something in it and as I did as directed and opened it, he said he'd written the paper at 3 a.m. that morning (more than eight hours before we met). Folded up inside was the paper shown with the envelope and quarter in the photo at left. Words failed. (I didn't even think to ask him how, with his skills, he could misspell my name because to me it's proof that he focuses on that which he must focus and all else is extraneous. This, to me, makes eminent sense.)

I understand that If you take all the entertainment, jokes and funny things off what I do, it's a frightening thing. Most people are rational and look for rational explanations. And Israelis are the most skeptical people in the world. They don't believe anything. The [pattern of my life was set] in Israel. Everyone wanted to test me. So I am used to it.

At ease with his gift, Suchard struggles still to describe what he does. "I call it 'Supernatural Entertainment,' but I'm not sure that describes it. I am not a magician, an illusionist, a psychic or a mind reader. And my act has a lot of comedy in it."

I suggest "Comedy With Another Dimension."

Whatever he calls it, Lior Schard wants to work more in the United States where, today, aside from the opening gig with Joan Rivers, his work is mostly at corporate functions. My feeling -- and it's a strong one -- is that someday soon he'll be part of the mainstream and be seen on national TV fairly frequently. Meanwhile, take advantage of any opportunity you have to see him and check him out on youtube.