Sunday (September 7) was National Grandparent Day, just in case you missed it. I know many (if not all) of you are thinking, I have never heard of Grandparent Day. Does anyone actually celebrate it? I have to admit, it's not a day that anyone I know really honors, and when I mentioned it to people in passing, they all seemed pretty ho-hum about the subject. However, grandparents mean in-laws, which mean mothers-in-law and daughters-in-law, so the whole topic led me to think more about the mother-in-law/daughter-in-law relationship. (As if I need another reason to think about this relationship, right?) 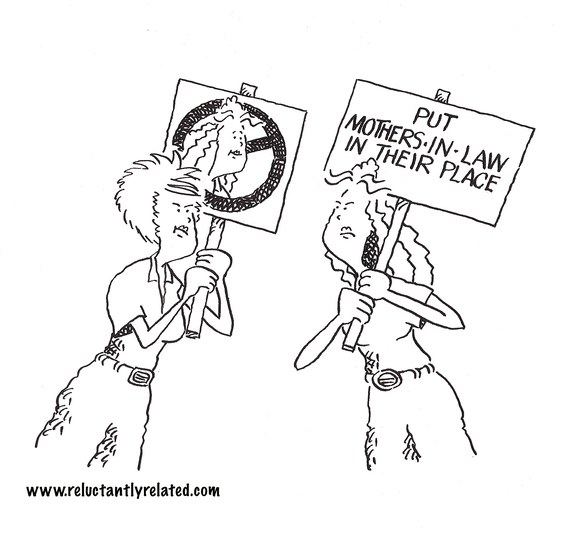 I know I've said it before, but it remains true -- the mother-in-law/daughter-in-law relationship is the most critical relationship in any family system. My latest research highlights this over and over. When a mother-in-law and daughter-in-law do not get along, the resulting tension affects everyone in the family. Whether it's a father-in-law, husband/son, daughter-in-law, brother-in-law, sister-in-law, or children/grandchildren, every family member is affected. Many often feel the need to take sides-- whether openly or in a quieter, more subtle way. Regardless, no one is immune from what is going on in this relationship. Here's why:

When a mother-in-law and daughter-in-law don't get along:

• The father-in-law (the MIL's husband) sees his wife hurting and in pain.

• The brothers-in-law (the MIL's other sons) may try to stay out of the mess between their sister-in-law and mother, but they often end up getting involved because in the end, they want to shield their wives from any pain or hurt. Such a man may also get upset with his brother if his brother's wife is causing too much havoc in the family.

• The husband/son is right in the middle of the battle between his mother and his wife, getting grief from both about either not taking sides or not taking the "right" side. It's a no-win situation for him.

• Children/grandchildren are impacted because they love their mom and they love their grandmother. (Remember, kids see grandparents very differently than you do -- it's their grandma. Their relationship with your MIL is typically nothing like the relationship you have with her.) Children/grandchildren don't understand the issues being played out; they only notice the behavior both of you display, which can be confusing. They also are learning -- from both their grandmother and mother -- the way to treat people who matter to you.

No matter what the issues may be between the mother-in-law and daughter-in-law, everyone in the family knows about them. Unfortunately each member of the family sees the situation from their own perspective --meaning they bring their own personal history and emotional baggage along. As a result, it's difficult for any of them to remain neutral. These other in-law relationships become colored by what the mother-in-law and the daughter-in-law do and say, which guarantees that the whole family pot stays pretty well stirred up!

1. Recognize that this is happening or that it very well may happen. Recognize that actions have consequences -- as does not taking action -- for both you as well as for other people in the family.

2. Take a step back, take a deep breath, and take an honest look at the bigger picture.

3. Ask yourself, Is this really how I want things to be in my family? Do I really want my family to see me as either the villain or the victim?

4. What can I do to start to make things better -- for me, for my in-law, and for the rest of the family?

No one wants to believe that they are directly or indirectly hurting other people, particularly people they care about. Unfortunately, that's exactly what they are doing when they perpetuate tension between themselves and their in-laws. As unintentional as it may be, they do end up hurting other family members who love them.

Give it some thought. Whether you feel it is your mother-in-law or your daughter-in-law who is really causing the problems, remember that you are the one who has the power to turn things around.

If you would like some help figuring out what you can do to make this relationship better, please email me at Deanna@DrDeannaBrann.com