On a warm summer evening in Bedford, New York, surrounded by rolling hills and a warm audience of supporters, the girls introduced themselves, in all their diversity and honesty: "I'm yellow." "I'm white." "I'm caramel." "I'm bi."

The bullied girl who found school "the scariest place to be," who "went to the blade because I felt afraid." Jewel.

The girl who "just because I'm in seventh grade doesn't mean I'm any less discriminated against." Emma.

The girl whose dad "beat my mom for 15 years, [but though] she was down she brought herself up." "Elizabeth."

"Sticks and stones can break your bones," finished one, but words can hurt you."

Words are the currency, and the power, of the young performers of Girl Be Heard, artists and activists who bring global issues affecting girls center stage in cutting-edge theatre. The nonprofit company has performed at the White House, the United Nations, the State Department, TED conferences, and in underserved communities locally and globally. Major original productions have addressed homelessness, the rape epidemic in the Democratic Republic of the Congo, sex trafficking, and gun violence. 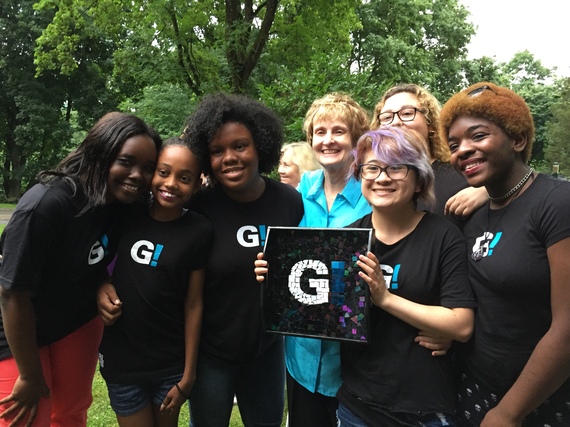 It always starts with the personal. When Hazel joined Girl Be Heard, she heard the story of Melanie, whose brother was shot and killed in 2010--something she could not have experienced otherwise. So she shared her stories too. "Society teaches us to gulp down pain and not be vulnerable," Hazel says. "Girl Be Heard gives us a place where we can be vulnerable." As Executive Director and Co-Founder Jessica Greer Morris pronounces, "We take the shame out of the equation...and show that you can rise above adversity."

And they change lives. "I owe this group so much," says Alexandra Saali, a founding member from 2008 who now serves as a Young Professionals "Amplifer" for Girl Be Heard. Hearing about the plights of Congolese women and the other girls gave her "purpose, mission, and the drive that kept me on track through the crazy years of growing up." Alexandra is bound for medical school after she graduates from Brown University. 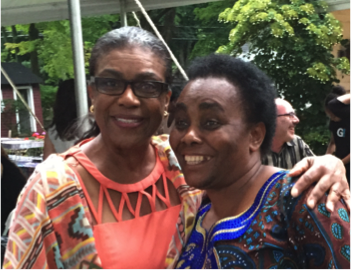 Julienne Lusenge (r), President of Female Solidarity for Integrated Peace and Development, a coalition of 40 women's organizations in DR Congo, so believes in Girl Be Heard that her daughter Raissa is joining. Also at the Bedford home of Chairperson Jackie Shapiro was former Premier of Bermuda Dame Pamela Gordon-Banks (l), to be honored at this year's "Gotta Love Girls" Gala.

In Bermuda, she said, "We have a saying: 'For each one, reach one, teach one.'" She went on to share the impact of Girl Be Heard performing in Bermuda, "where, being a small country, people can be quiet. These young ladies made it possible for people to realize they can have a voice, and that everyone has a story. With a support system you can do and be anything. The sky is the limit."

Which is at the core of Girl Be Heard's philosophy: if a girl can change her own life, she can change the lives of girls everywhere.

This upcoming season, the girls will address eating disorders and the $55-billion-dollar-a-year diet industry in a documentary theatre and dance piece called Embodi(ED). They also have workshops, school groups, and ensembles. When girls audition, Artistic Director and Co-Founder Ashley Marinaccio is looking for "raw talent, passion, and the potential to develop as an artist and thinker." Most important: "someone with something to say." 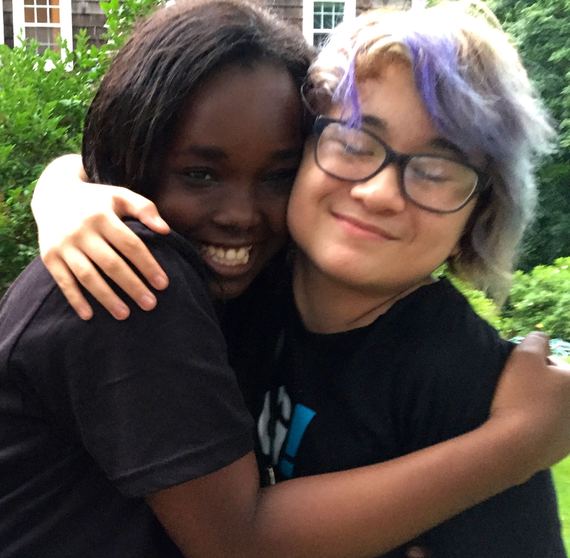 Girl Be Heard takes it from there. "Our job is to put Miracle-Gro on these young talents," says Greer Morris, to empower young women to become brave, socially conscious leaders in their communities. They also build lasting and invaluable community--family, really--for the girls. "Once you're a member of Girl Be Heard...you're with Girl Be Heard for life." Full disclosure--my daughter (r) is a proud member of Girl Be Heard. I'm a proud mom, who also works in philanthropy and knows "making a difference" when I see it.

Girl Be Heard is the real thing. They make a difference. They change lives. And they speak to us all.