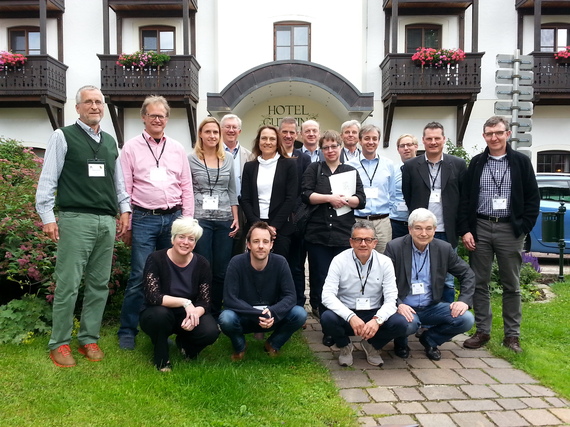 Chiemsee in Southern Bavaria (Germany) is known for its wonderful nature and peaceful life. It is also an ideal meeting point right at the center of an area connecting Austria, Germany Switzerland and northern Italy, an area in which peoples and cultures have met and influenced each other for centuries.

This is one of the reason the Center for Innovative Cultures - born last year in the mountains surrounding Salt Lake City (Utah) and now growing at the Bill and Vieve Gore Business School hosted by Westminster College - chose to set up its first European Summer Conference. The venue was the Gut Ising Resort, an ancient farmhouse and stables that has been hosting travelers for more than 400 years with a spa appreciated by the Ancient Romans.

A very diverse group from different countries (UK, Germany, Austria, Switzerland, Italy and the US), backgrounds and careers, came together to discuss the value of "workplace culture" as a competitive advantage.

The group comprised academicians, thought leaders, scholars, former and current c-suite level managers, entrepreneurs and consultants, all sharing an interest in studying the relationship between individuals and high-performing organizations.

The theme was firstly explored by the Center for Innovative Cultures in August of last year during a similar event held in the US. The conclusion of that meeting was that there is indeed a direct relationship between performance and culture and that the more deliberate an organization is in recognizing and developing its own culture, the higher the likelihood its performance will be affected positively. Participants also recognized that for a culture to be embraced it must be rooted in values people can easily relate to at a very deep and universal level.

There is a growing amount of evidence that culture will be at the top of the HR agenda in the years to come. There is also widespread agreement it represents a unique competitive advantage for an enterprise just like technology, IP or brands.

As a reference, check out an interesting post published by the Huffington Post blog "Cultural Acupuncture" in May of this year that picked up what Peter Drucker famously said about "culture eating strategy for breakfast". It's widely accepted that culture is a prime driver of organizational performance. But today, many companies are confirming that more than anything else culture exerts the most powerful influence over employees' behavior.

At Gut Ising, Michael Pacanowsky, the Center for Innovative Cultures co-founder and Director, acted as the facilitator and guided us through a number of participant's' triggered workshops, case studies and lively discussions.

Past the initial challenge of finding our own definition, one of the most stimulating exercises was the one in which through the use of provocative images we discussed a matrix in which 4 quadrants defined the relationship between the organization and the individual based on cultures that may make one thrive at the expense of the other. The exercise added an interesting dimension to the discussion by showing how our own individual ability to see things differently enabled the whole group to discover very quickly the boundaries of the dilemma and come to terms with the limitations many organizations still seem to have when recognizing how their own culture influences their performance.

One evident outcome of the meeting was that we - an extremely heterogeneous group of people - managed to develop our own (very effective) organizational culture in a matter of just a couple of days building on both our commonalities and (even more) on our differences. Age, gender, culture of origin, language and background did not limit our ability to find a common ground and from there explore the nuances of the relationship between our own individual goals and expectations and the ability of the group to provide an environment in which to fulfill them.

At the end the big question we could not completely address was how to promote a culture-driven approach to a larger corporate audience. We all shared the feeling that the number of organizations truly "Riding the Waves of Culture" (as Fons Trompenaars would put it) still is relatively small and we have not reached yet the tipping point that will see more and more workplaces become aware of what drives them towards (or prevents them from) becoming "high performing organizations". At the same time the growing amount of evidence and simple fact the European Summer Conference was able to attract such a powerful group of individuals, are proving how important the cultural aspect is becoming both inside organizations and among those who study, influence and educate the workforce of the future.

This, as Pacanowsky puts it, is also the very reason the Center for Innovative Cultures was created.

Should you want to read more I recommend a couple of books (Firms of Endearment and Culture Eats Strategy for Lunch: The Secret of Extraordinary Results, Igniting the Passion Within) and an interesting article on the possibility to measure the economic value of corporate culture that came out in 2013.

Massimo Gilmozzi is a management consultant and entrepreneur based in Italy and working internationally across a number of industries. His main areas of interest are strategic development and cross-cultural organizational alignment. Before becoming a consultant in 2002, he spent more than 20 years in the medical-biotech arena first with J&J and later with WL Gore & Associates. Contact Massimo at gilmozzi@acmeconsulting.eu, via Linkedin, or Twitter.