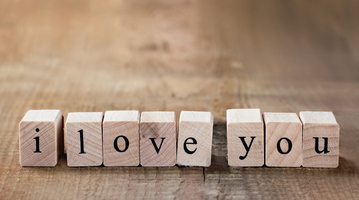 They can build; they can destroy.

But perhaps the most underestimated power words have is when they are left unspoken.

Robert grew up in a rural area where his dad was known as the town drunk. Robert was a star football player who made the All-American team in high school and went on to play for a prestigious university. Football was Robert’s life, but as far as he knew, his father had never seen him play a single game.

Inside, Robert felt a void. He wasn’t conscious of it back then, but what he wanted and needed most was the approval of his father.

After college, Robert struggled a bit as a business owner. He lacked self-assurance and people skills. One day, he got a call telling him his father had had a heart attack and might not make it. Robert rushed to the emergency room. When he walked into the dark room with the hallway lights bright behind him and his father still disoriented, he thought Robert was the doctor.

What his father said next would forever change Robert’s life.

“Hey Doc, have I ever told you about my son, Robert? Man, what an athlete. He was a great football player you know. He was really something to watch. He ran like lightening! Now he is a successful businessman. He’s smart and talented. I am so proud of him Doc, I just wish you could meet him.”

That day Robert heard the words he had longed to hear for more than 35 years. His father’s assurance and pride were like a healing tonic coursing through his body. Robert’s father survived the heart attack, and they both gained a new outlook, each in his own way.

Today, Robert is the CEO of a multimillion dollar, multinational corporation -- and the successful businessman his father described. He ultimately found out his father had attended some of his games but stayed out of sight because he didn’t want his reputation to embarrass his son.

Words don’t have constructive power until they’re spoken. Robert’s father never expressed his sentiments in words. “Robert doesn’t need to hear this from me,” he thought. “He’s successful. He knows how great he is.” Not true.

When we don’t hear what we need from those closest to us, we may feel a void -- one that only a parent’s words can fill, or a spouse’s, a boss’s or a friend’s.

You have a responsibility to the people you care about. Your words, your validation, your affirmation can change people’s lives. This is as true for your children and your spouse as it is your clients.

Everyone walks around with a big sign around his or her neck that says, “I need love. Make me feel important.” Yes, even that guy on the highway who waves at you with one finger yelping oddities in what must be French. What he is really saying is, “You made me feel unimportant,” and “I need love.”

Perhaps no human need is more neglected in the workplace than feeling valued. Feeling important is as important as food. The need begins at birth and never goes away. The need for significance in our work is a manifestation of our inborn hunger for meaning in our lives.

Try it today. Every room you enter, conversation you engage in and interaction you have. Catch people doing something right. Tell them they look good, did something well and you appreciate them.

Tell them today, “Hey, I am proud of you. You are special to me.”